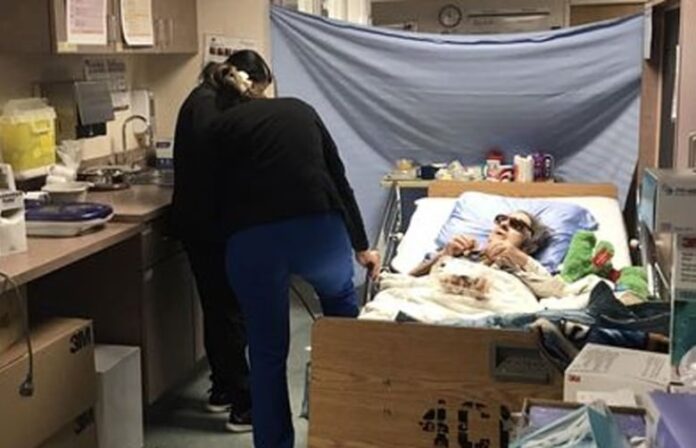 A New Brunswick woman is demanding answers after her 88-year-old mother, who’s in hospital awaiting a nursing home bed, was moved into a cramped room filled with supplies.

The health authority, meanwhile, acknowledges that it must use what it calls “non-traditional care spaces” to care for its hospitalized patients.

Karen Totten says she went to visit her mother Irene MacNeill at the Saint John Regional Hospital Thursday morning, only to discover somebody else in her place.

Fearing the worst, Totten rushed to the nurses station. “I was like, ‘Oh my God, what happened to my mother? Where is she? Nobody called me,'” she said.

“They said, ‘Oh, we had to move her because this person came up from emerge’ … and they took me over to where she was — and it was the friggin’ supply room.”

Totten was shocked, angry and hurt.

“When you’re deaf and you’re blind and you can’t walk, you need better care than that.”

Her mother had no bell if she needed to call for help and her bed wasn’t plugged in, so she couldn’t even sit up to eat or drink, she said.

“I mean, I know my mother’s old. I get it, and I know that her life is short. But if she would have died in that room, I don’t know what I would have done because they couldn’t have got in there to do anything to help her.”

The family’s story sheds light on a report this week that the wait list for nursing homes in New Brunswick has hit a record high of 833, and that nearly 500 of those people are in hospital beds.

Out of frustration, Totten posted about her experience on social media, including photographs that show her mother in her bed, dwarfed by shelving units stacked with clutters of various medical supplies and flannel sheets.

She also posted a short video of the scene. 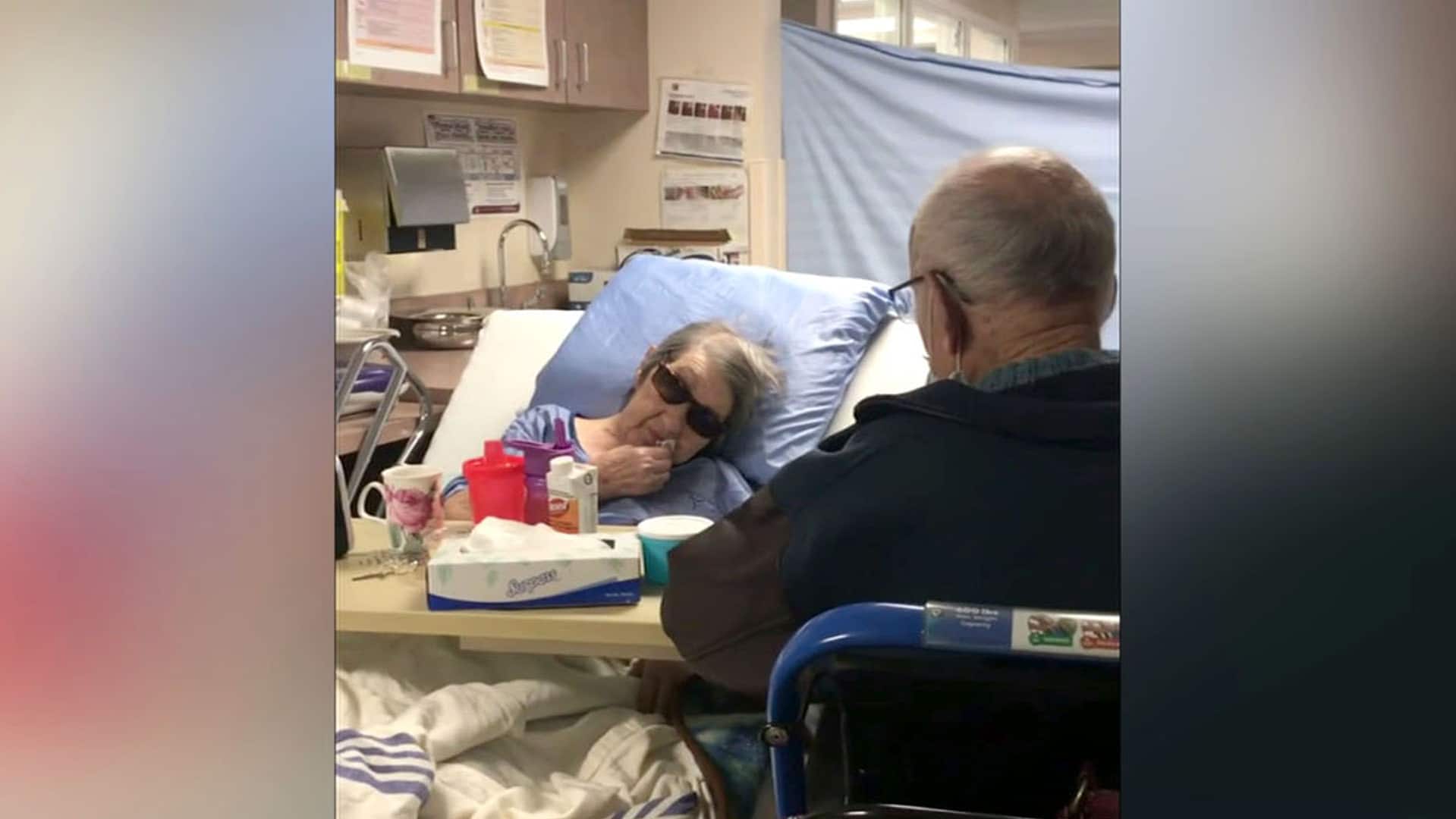 Karen Totten was shocked to find her mother had been moved to a supply room in a Saint John hospital.

Totten said her father, John MacNeill, 90, cried when he saw his wife of 65 years in a storage closet.

He cried all the way home. “Not out loud. I just looked over and he had tears running down his face,” she said, fighting back tears.

“I feel like I’m not taking care of her, you know? I feel like the whole system let them down.”

Based on the comments her Facebook post received, she’s not alone, she said. She described the stories as “heartbreaking” and “horrible.”

Among them: “I went back and begged. I begged multiple times before being seen by a doctor. My [five]-year-old ended up needing emergency throat surgery. What if I had sat there like I was told?”

“My mother was given a blood transfusion in the hallway. She was also told to use a bedpan should she need to use the washroom while in the hallway,” read another.

Hospitals may use ‘non-traditional care spaces’

Totten doesn’t know how long her mother was in the storage room and says the nurses, who were apologetic and seemed embarrassed, moved her to a regular room later that day.

But she says this is bigger than just her situation. She has contacted Horizon’s patient advocate, the officer of the seniors’ advocate and written to several government officials, including Health Minister Bruce Fitch.

In an emailed statement, Greg Doiron, vice-president of clinical operations for the network, said he could not comment on a specific case.

But “in situations where our hospitals are at or overcapacity, Horizon may utilize non-traditional care spaces in order to ensure all patients can be treated and safely cared for,” he said.

“Although not ideal, this is a measure hospitals commonly use in instances where capacity is limited,” Doiron said.

Patients or families with concerns over the care being provided are encouraged to contact Horizon’s patient representative services, he added.

Earlier this week, during a media briefing on the triple threat of the flu, respiratory syncytial virus, referred to as RSV, and COVID-19, Doiron said Horizon hospitals are all reporting occupancy rates above 95 per cent. Emergency departments are seeing a high number of patients presenting with severe respiratory illness symptoms, he said.

Province understands the ‘difficulties and challenges’ with long waits

The Department of Health did not respond to a request for comment about what specifically it’s doing to get seniors like MacNeill, who are in hospital awaiting a nursing home bed, into long-term care homes.

The number of New Brunswick seniors waiting to get into a nursing home has reached a record high of 833 as of November, according to Cecile Cassista, executive director of the Coalition for Seniors and Nursing Home Residents’ Rights. Of those, 483 are in hospital.

That’s up from 782 and 455 in October, figures from the Department of Social Development show.

The Department of Social Development “understands the difficulties and challenges with long wait times and is dedicated to working with multiple partners to explore all solutions, like recruitment at the national and international levels,” said spokesperson Rebecca Howland.

She noted the department added staff to hospital discharge teams earlier this year. “They help find alternate solutions, when available, including interim placements and safe home support options for individuals waiting for placement in long-term care.”

Although Cassista suggested there are beds available in other facilities, such as special care homes, Howland said many of the people in hospital awaiting placements, referred to as alternative level of care (ALC) patients, “require a high level of care, which can only be accessible in facilities such as nursing homes.”

Howland said the wait list is not static. About 150 new residents access nursing home beds in New Brunswick every month.

She acknowledged the need for nursing home beds continues to grow, however, and said the department is actively working to open more.

‘Working on it’ doesn’t cut it

Totten says her mother has been in hospital since mid-September, when she fell and broke her arm and bruised her leg, from her hip to her ankle.

Prior to that, she was living in an apartment with her husband in their son’s home, just a few minutes away from Totten, with home care support.

MacNeill was medically discharged on Oct. 18 but has nowhere to go.

“Is this what my parents worked their whole lives for? Is this why we pay so much in health care taxes?” Totten asks the politicians in her letter.

These are human beings with real lives and families.– Karen Totten, daughter of hospital patient

She says she can’t understand why New Brunswick doesn’t have enough beds for its elderly to “live and die peacefully.”

She questions why measures weren’t put in place then, and why the N.B. government isn’t spending some of the forecasted $774.4-million surplus now to solve it.

“‘We are working on it,’ just does not cut it anymore. These are human beings with real lives and families. Real people dying in hallways all over New Brunswick hospitals waiting to be seen, assessed, cared for,” she wrote.

Totten ends her letter by urging anyone with parents or grandparents at home over the holidays to “hug them a little tighter and voice your I love yous.”

“We’re all one bad fall away from losing a senior to this failing system.”