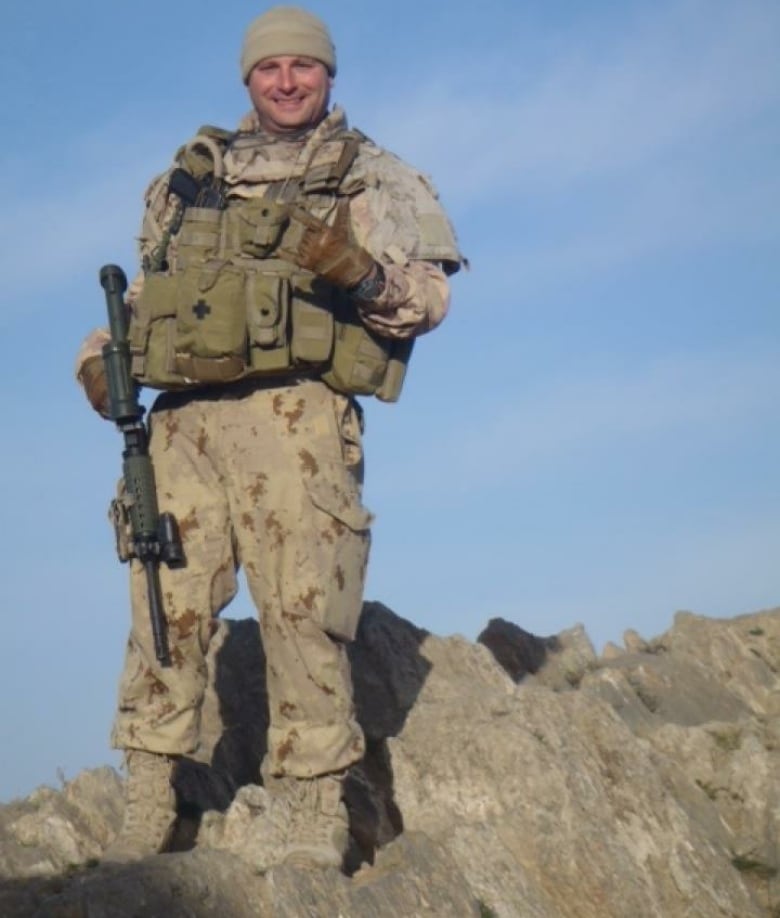 At his dining room table, Dennis Leblanc clicks through a digital photo album of his time in uniform. With his wife Amanda looking on, he recalls a period of his life filled with purpose and camaraderie.

“I loved it,” said Leblanc, who lives in Oromocto, near 5th Canadian Division Support Base Gagetown, south of Fredericton. “I still love it. I could push myself. I knew my limits and capabilities, and then I would surpass them. And that’s what I loved about the job so much.”

A veteran of Bosnia in 1999, Haiti in 2004 and then two tours of duty in Afghanistan, Leblanc revelled in the life of a soldier. For all the welcome memories though, there are just as many scars.

Like so many other Canadian soldiers who deployed to Afghanistan, Leblanc returned a changed man. The brutality and death of a war zone, the loss of comrades and friends, took a heavy toll, and healing was elusive.

Eventually, Leblanc was treated with ketamine, a one-time veterinary anesthetic now being touted as a therapy for post-traumatic stress disorder.

Leblanc had been diagnosed with PTSD in 2008 and treated while still in uniform. It was enough to carry him through to the end of his service but cost him his first marriage.

He returned to civilian life in 2015, after 18 years in the army. But leaving the life he loved brought its own traumas,  reopening old wounds he and his second wife Amanda thought had healed.

“I started having nightmares. I wasn’t sleeping well … insomnia, super hyper-vigilant. I was a disaster. I wasn’t drinking daily, but I would still, you know, have a good time, and I’d look for it, and I would still use it.

“And at the time, I was on a lot of medications that you’re not supposed to drink with. I was not in a good place at all.”

Nothing seemed to help

Amanda could see her husband’s deterioration as he struggled to adjust to civilian life.

“He was really experiencing a complete loss of identity. And yes, he had lost friends. And yes, he had seen traumatic things and he had been through horrible experiences. But losing that part of him was not something that he had anticipated. So things went downhill pretty quickly from there.”

“I was on my way,” Dennis said quietly. “At one point in time, to be honest, I was going to hang myself and I … she yelled out for me, and I stopped … I wouldn’t be here without her.”

Prescription medications weren’t working, Leblanc said. Always open to alternative options, he tried yoga, meditation, hypnosis, cannabis, exercise. It was clear to both Dennis and Amanda that if he was going to survive, something had to change.

Battlefield drug put to new use

They found a private clinic outside Fredericton, in a former call centre, where rows of sterile cubicles have been replaced with comfortable, overstuffed furnishings.

Soft music and soothing lights create an atmosphere more spa-like than medical. But the people who come here are looking for something stronger than hot yoga.

The recently opened clinic is operated by Field Trip Health, a chain of clinics in the U.S. and Canada that treats PTSD with ketamine.

Ketamine was formulated in the 1960s as an anesthetic. It proved its worth during the Vietnam War and eventually gained favour among veterinarians. Its anti-depressive and hallucinogenic properties popularized its recreational use.

Now ketamine is once again treating battlefield injuries for those wrestling with the ghosts of Afghanistan.

“As you can imagine, someone who’s suffering from chronic depression, anxiety or trauma, it is really, really hard to break that cycle of thought. Something like 95 per cent of our thoughts every day are the same. By taking a dose of ketamine and slowly graduating over a number of sessions, what we can do is suspend all those ordinary thoughts.

“And what patients will tell us is for the first time in a very long time, they get a whole new perspective at looking at their life, and it’s that new frame of reference or new perspective that starts to initiate a healing process.”

A longtime proponent of cannabinoid therapy to treat PTSD, Verbora is now one in a growing group of doctors promoting hallucinogens for the same purpose.

Ketamine is one of an arsenal of psychedelics once popular as recreational drugs, but now showing more promise treating trauma.

Settled into a stylish lounger, clients are hooked up to a blood pressure monitor.  An eye mask blocks out light, noise-cancelling headphones add to the sense of isolation. A weighted blanket provides further comfort.

The dose of ketamine is ingested in a lozenge. The resulting trip is brief but impactful.

“It felt like a warm blanket kind of just trickling down over me,” Leblanc said. “Like it was just a comforting feeling. I had an eye shade on, the room was black. It wasn’t scary. And then immediately I just started falling and I started to kind of like, ‘Oh, what is going on?’

“And then, boom, I was 10,000 feet in the air over one of the incidents that occurred in Afghanistan, watching the big picture unfold.” 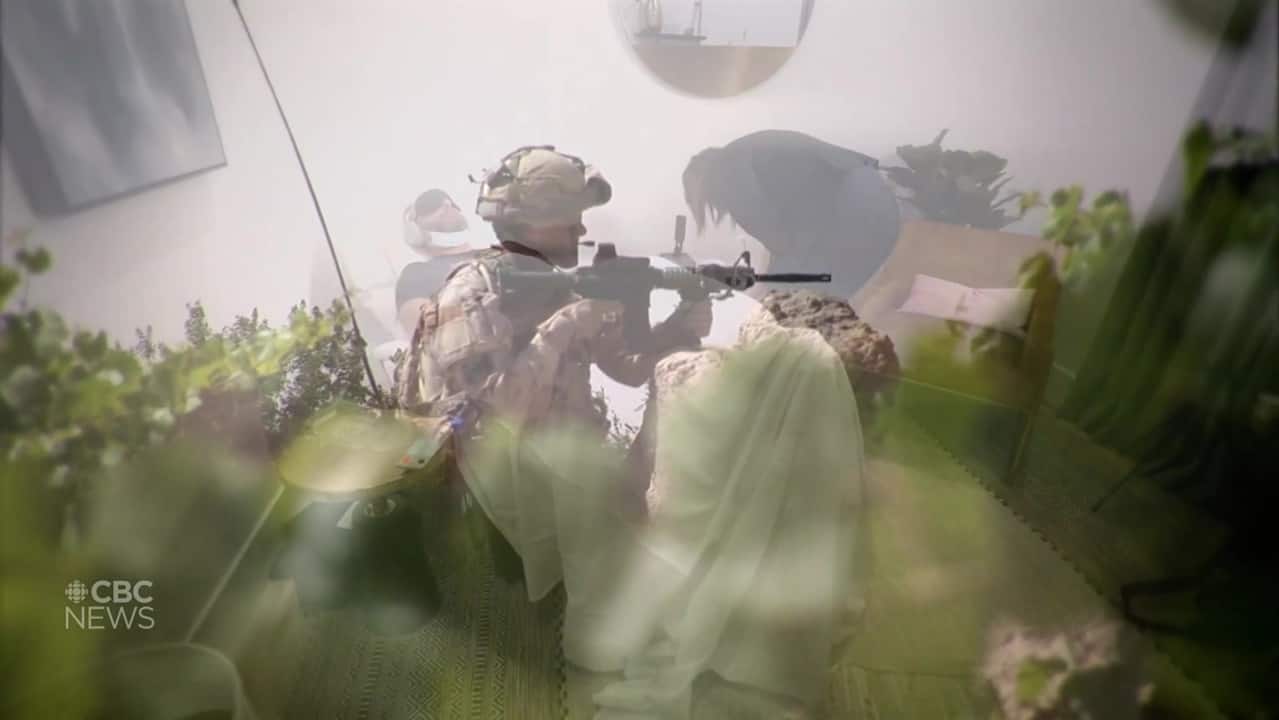 Psychedelic solution: How a club drug has turned trauma into treatment for PTSD

Ketamine, a one-time veterinary anesthetic and illicit drug known as Special K, is now being touted as an effective treatment for depression and PTSD. 9:32

Leblanc said he then started to talking to himself, but to his younger self.

“Like I sat down and said, “Listen, what do you need to do?’ And actually, it was me now, a much older me, saying, ‘OK, you need to change some things in your life. You need to smarten up.”‘

As the drug wears off, Leblanc is questioned by a psychotherapist about what he experienced. This is the most crucial part of the session, according to Verbora.

“A lot of these psychedelic drugs, ketamine included, what they do is, in addition to suppressing your normal thought patterns, which can sometimes be very sabotaging and pathological, it opens up this temporary window of maybe five to seven days where the brain enters a learning state.”

That learning state gives therapists an opportunity to delve into the patient’s subconscious, using the brain’s ability to rebuild neural pathways and in a sense, reroute the subconscious journey around the trauma.

An alternative to usual drug treatments

For Leblanc, the sessions lifted a weight.

“I felt great,” he said. “No pain. My mind was clear, like happy. You could have probably sold me a Lamborghini and I would have figured out how to pay for it later. But that’s how great I felt.”

The ketamine sessions offer an alternative to the traditional treatment of PTSD using anti-depressants such as Zoloft, Prozac and Paxil. Often they’re being prescribed with other drugs that result in unwelcome side-effects, said Verbora.

“People aren’t really healing through these pharmaceutical approaches, and a lot of veterans are taking three, four, five pharmaceuticals, many of which can be very, very addictive. And when we look at the new literature coming out with psychedelics, what we see is the ability to cure people.”

That’s a big claim, and not one other scientists are ready to make just yet.

At Toronto’s Centre for Addiction and Mental Health, researchers are impressed by ketamine’s potential.  But Dr. Yuliya Knyahnytska is wary of a rush to embrace ketamine as the new panacea.

“There’s no comparability data at this point to compare that ketamine is as effective as most evidence-based treatments. So as exciting as it is, it’s not ready for the general distribution to recommend as an evidence based practice for people with mood disorders yet.”

Research isn’t limited to ketamine. Other hallucinogens, like MDMA, LSD and psilocybin, are also being tested for their ability to disconnect the brain from traumatic experiences. For now Field Trip Health is sticking with ketamine, hoping to expand its use and its clinics, right across the country.

Founded by a group of Toronto-based doctors and entrepreneurs, the company already has clinics in eight major U.S.  cities. The Lincoln clinic is the second of three outlets in Canada, chosen for its proximity to the military base and the large community of serving and retired military personnel.

Veteran feels he has a future

Treatment isn’t cheap. A course of six sessions at Field Trip Health costs about $6,000, and it isn’t covered by Medicare.  So far, about 35 clients are being treated at the Lincoln clinic or have already completed the  program.

Aside from being a client, Dennis Leblanc now works with Vanguard Wellness, an agency that refers retired military personnel for mental health therapy. He has no qualms about recommending to others what he feels has worked so well for him.

“So I can, you know, take care of myself a lot better, you know, physically, mentally and then also support my family at the same time. “