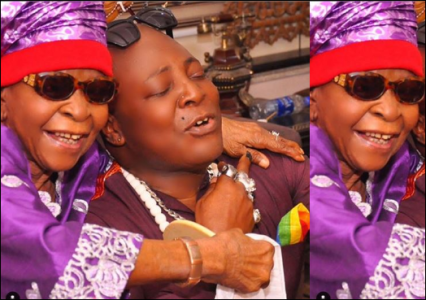 Veteran Entertainer, Charly Boy in a chat with TheSun opened up on the life and times of Madam Oputa, including his regrets and plans for the burial among other issues. Enjoy it.

What was your first reaction when you heard that your mum had passed on?

I was mad, upset; I cursed her a little in my mind! I felt she chickened out because we had a discussion about death a couple of times. Sometimes she would say ‘oh, I want to go, I want to go’ and I would say ‘go where?’ I would pretend I didn’t know what she was saying and ask ‘okay, you want to go back to the village?’ She would lament: ‘Look at me, nothing is left of me, I want to go’. Then I would reply, ‘you want to go and leave me here? ‘You can’t dump me with all the things I am fighting. You have to stay so you can be giving me ammunition’ and then she would smile. I once posted a social media message where I prayed ‘I am not God, I don’t know the time but I wish mum could die in my arms’. That was the picture I had.

What was your first reaction?

My wife called me to say mum was breathing funny. Then I was in the Philippines on my way from New Zealand. I had spoken to her a day before and she asked when I was coming back. I said the next day, so she said ‘buy me this and buy me that’. When my wife called me the next day, I thought she was trying to trick me. I just broke down and cried but I had to pull myself together and start calling people. I called my wife and asked, ‘Is she dead? I can deal with it’. But she said ‘no she is not. Come back you will meet her’. Two hours after that conversation, she passed on. I have done my grieving and I don’t know whether there is still more to do because I haven’t buried her. I am not going to play macho and say I am a man, I won’t cry. If e hungry me I go cry.

Ever since she passed, have you seen her in your dreams?

I have séances. I don’t know if you are aware of my virgins. I have people who help me to locate dead people. I had two virgins around at my dad’s burial and most of the stuff that happened was as a result of communication with my father. When I talk about virgins, I am not talking about it in the physical sense, but the purity of the heart. My virgins are people who God has blessed with one gift or the other, but they are very few. It takes one to know one. So, unless you know, you will never know.

When is the burial?

December 28. I realized that when you get to that age, you desire death because wetin you wan do again? And that was why she was always saying she wanted to go. They always know they are ready for it and I think mum didn’t want me to see her dying. Somehow, I felt she tricked me because we had this conversation a lot of times and I told her ‘you are not going anywhere until I do all I want to do for you’.

Can you share some of the greatest moments you had with her?

My mother is a witch–

A witch? Which coven did she belong to?

No, she was a good witch (laughter). And how do I define a good witch? It’s somebody who through intuition knows when things are about to happen. They are futuristic. You can’t be the mother to Charly Boy who stayed in the womb for 11 months and you were able to turn him into a man without being a Madonna. So, when I say my mother is a witch, this is what I mean. And she loved publicity even at the age of 101; nobody liked publicity more than my mum. Mum was a drama queen. Sometimes, she came to watch my gym after which she sat down and talked, and we grabbed ourselves. I noticed mum liked me doing videos and posting. She always asked ‘have you posted that thing? Bring it, let me see. Where are the comments?’ She wanted to read and that blew her mind! I read her the comments and she would then run her own commentary. I was just looking for things to make her happy until the end. It was the same with my dad. I had to make restitution to my dad for the things I did to him between ages one and 30. At a point, it got so bad mum was trying to take me for deliverance. But mum was the first to have hope in where I was going, and I remember dad would say ‘oh, you are the one spoiling this boy.’ And mom would say ‘no, this is not an Army Barracks.’ Because of me, there was always a quarrel between mum and dad.

What was the greatest advice mum gave you?

Mom was always about showing love and doing good (to people). It was always about looking out for everybody. Everybody has the ‘ying and the yang’, the good and the bad but she would tell me, ‘don’t dwell too much on the dark side. Concentrate on the good side and see how you can help them’. Mum loved humanity. It was after she died that the magnitude of it all struck me. Now, I understand why mum was always broke. It was because she was giving everything she had out. She said if you can identify an ounce of good in anybody; magnify it. Mum was a woman who knew when the gateman had headache, and when he was worried. My entire staff mum knew by name and had personal rapport with. She was from the Onomonu family and her sister was the richest in Oguta back in the day. Her family has massive love for humanity; it is who they are. I have heard many incredible stories and that makes me proud of my heritage, pedigree and where I am coming from. I know the tree I fell from, I am not on the same level with a lot of people.

Your dad’s funeral was flamboyant. What should we expect at your mum’s?

We discussed that too; mum and I and she was like ‘don’t do what you did at your father’s burial. I want a very private funeral’. Mum saw where I was going long ago and quietly encouraged me, but dad was competing with me initially and did not understand because he wanted it in a certain way and I refused to go that way. Dad’s burial was a carnival and I am sure that is what the people are expecting, but I will give them something else. After 30, I stopped disobeying my parents, so I will not disobey mum in death. She said there should be no drinking or dancing. It should be solemn so that people can reflect on their lives. She said that it is when someone is alive that you show him or her all the love and whatever you have to show, not when they are dead. I know people are expecting a flamboyant funeral but they are not going to get it. I will do exactly what she wanted.

How are you coping with her absence?

I miss her. I cried at the airport but that does not mean I may not cry tomorrow. If cry hungry me I go cry; I won’t be macho about it. For now, I want to make sure that all she wanted when she was alive she gets and more because after I bury her, me, I go come to Kress because of my contract with her don end. The Kress go de on another level. After the burial, I plan to do the biggest send off for my mum. It will be a night of fun and excitement with lots of food and music; we will dance till morning because I am in a celebratory mood