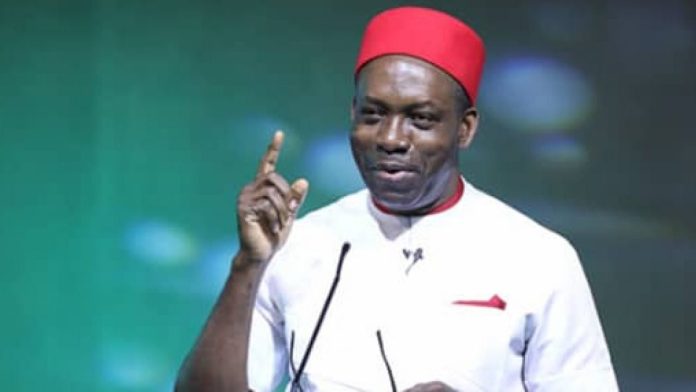 Anambra State Governor, Prof. Chukwuma Soludo says his first 100 days in office have been very bumpy but added that they have also been good.

Soludo, who marked his first 100 days in office on Saturday with a state-wide briefing, said he looks forward to a better time ahead as governor of the state, while also assuring that every promise he made to the people of the state will be actualised.

DAILY POST however observed that in his over 30 minutes broadcast, the fight against insecurity topped the activities of the state government, within the period of his swearing-in, on 17th March to date.

Soludo in the briefing said: “We just clocked our first 100 days in office, as I and my deputy, Dr Onyekachukwu Ibezim serve you as your governor and deputy governor.

“I am not a fan of marking 100 days in office. I prefer to give you an annual report and we look forward to the first one in March next year.

“The last 100 days has been very bumpy and challenging. It has been a case of so far, so bumpy, but so good. Everyday we work 24 hours to ensure that we do not disappoint you. We have resolved that we must do that to make you happy and proud.”

Speaking on the security challenges in the state, Soludo said: “I remind everyone who wants to commiserate with me that I duly applied for this job.

“We have launched a campaign to restore our homeland. Most people can attest that the grave insecurity is gradually being contained and we remain undaunted. Even as I speak to you now, something is going on in various communities in Anambra State.

“This administration is built on five pillars, our first pillar is security, law, and order. We have created a new ministry, the Ministry of Homeland Affairs, which has also unveiled the security and emergency crack team. We have embarked upon mobilization, sensitization and worked with clergymen and others to mobilize the people against insecurity.

“The people are united in fighting against the lucrative criminal enterprise and idolatrous acts. The criminals have been exposed and our people are leading the fight and changing the narrative. We declared war on them and government is determined to deal with it.

“It took years for criminality to take root, and we have a long way to ensure we stop it. No bushes, forest or home will accommodate criminals in Anambra.”