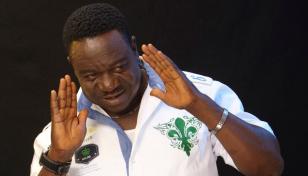 John Okafor is presently counting his losses as armed robbers invaded his house and stole properties worth N14M.

John Okafor popularly known as Mr Ibu isn’t one of the happiest people at the moment as armed robbers stormed his residence and carted away with his properties and cash.

According to THE NATION, Mr Ibu who disclosed what really transpired at his residence said his wife was at home when the robbers invaded his house. He, however, has reported the matter to the police.

“According to my wife, the operation started at about 3 am and lasted till about 4:25 am this morning after which they left with all my property and cash,” Mr Ibu said.

2018 apparently has started off on a sad note for John Okafor popularly known as Mr Ibu who is one of the funniest actors in the Nollywood industry.

It would be recalled that back in 2015 while granting an interview with Vanguard newspaper, the funny actor revealed that he was once wooed by a homosexual. According to him, because of his disdain for homosexuals, he called out the man and humiliated him publicly.