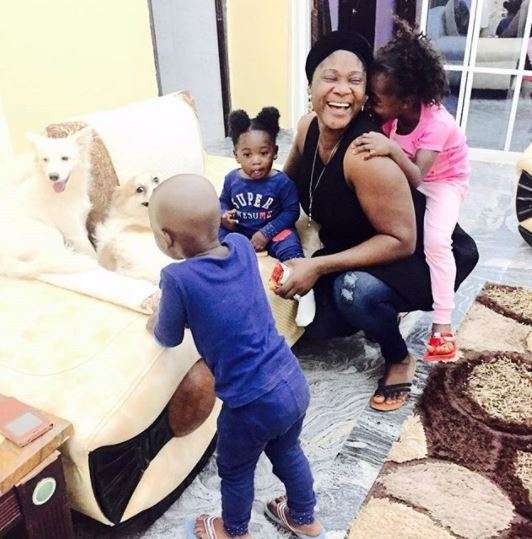 As we celebrate mothers’ day, we cant but be inspired by these wonderful women, not forgetting our celebrity mums.

It might be just one day set aside to celebrate mothers around the world but we know how special they. So we will be celebrating 10 celebrity mums in Nigeria who over the years have despite their careers remained amazing mothers.

Mercy Johnson with her three kids

Mercy Johnson-Okojie is one celebrity mum who is never shy to show off her kids on social media. This beautiful and voluptuous actress who doubles as a wife and mother of three beautiful kids prides herself as a natural when it comes to “mummy duties.” Whenever she releases photos of her family, especially her kids, we get to see them in the most natural form not photoshopped.

Some mothers give birth to children and get really emotionally close to their kids and Tonto Dikeh is one of those mothers. Since giving birth to her son, King, Tonto’s undying love for him is glaring that she practically can’t write anything on social media without mentioning him. The mother and son bound can be seen in videos and photos of the two on social media. Tonto Dikeh once declared that she would give the world to him.

play (Omoni Oboli with her kids and husband, Nnamdi Oboli)

When families take photos and hit social media it usually gets a lot of buzz but when that photo is of Omoni Oboli and her three sons, then you are in for some cute family alert. Omoni Oboli isn’t just your pretty celebrity with all the fame but she is a proud mother who never fails to spoil her fans with photos of her sons who are gradually turning into fine gentlemen.

Omotola Jalade Ekeinde with her kids and husband, Mathew Ekeinde

Omotola Jalade-Ekeinde might the oldest mum on this list but she has got one really cute family. Omotola who got married at the age of 17 and recently turned 40 is a proud mother of four amazing kids. The veteran actress over the years have shown us how raising kids despite being in the spotlight can still be achievable. From a music producer another being a chef, Omotola’s kids are becoming stars of their own.

Tiwa Savage with her son, Jammel

“Mummu Jammal” as she is also called is one celebrity whose credential as a doting mum cannot be challenged. Even though Tiwa Savage is unarguably one of the biggest celebrities from this part of the world, she is still an amazing mother. Tiwa Savage gets to flood our time line with photos of her cute son, Jammal, anytime she dimes fit and nothing can hold her back.

Ufuoma Mcdermott with kids and husband

Ufuoma Mcdermott might not be your everyday “all in your face” celebrity but the beautiful mother of two keeps giving us mum goals. Ufuoma who is married to a foreigner is as guilty as other celeb mums who can’t get enough of showing off their cute kids. From photos at home to school activities, we get to see how this celebrity mum is raising her kids in the right way.

Adaeze Yobo with her kids and husband, Joseph Yobo

She isn’t just a former beauty queen or wife to a former Nigerian football international, but an amazing mother of three. Adaeze Yobo can be categorised as those celebrity mums who might have a thing for cute family photos. Whenever we get to see photos of this beauty queen and her kids, they always look prepared and ready to slay for the gram! Just recently Adaeze gave a testimony surrounding the birth of her third child which was really inspiring.

Osas Ighodaro with her pretty daughter

You would think becoming a married woman and mum would make her change, then you guessed wrong. Osas Ighodaro has remained that amazing woman and that has influenced her motherly roles. Every now and then, we get to see videos and cute photos of this former beauty queen with her beautiful daughter.

Lilian Esoro with her son, Jayden

As we celebrate mothers’ day, we cant but talk about the celebrity mum, Lilian Esoro. She isn’t just an amazing actress but a good mum also, from the time of her pregnancy till date, Lilian has remained one the most private, when it comes to the affairs of her son, Jayden. Once in a while we get to see cute photos of the actress and son and trust they do know how to slay for the cameras.

Annie Idibia with her daughters

She needs no introduction as she is one of the most popular celebrity mums in the entertainment industry. Imagine being the wife of a music icon and a mother of two beautiful daughters, it sure does come with a lot of weight. Annie Idibia is a very active user of social media and every now and then we get to see how the Idibia girls have grown from babies to cute little angels.