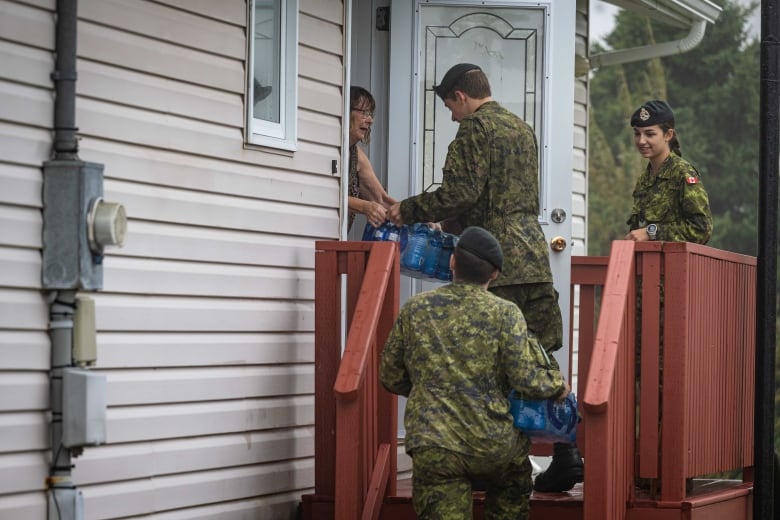 Defence Minister Anita Anand said Thursday there are now more than 700 Canadian Armed Forces personnel in Atlantic Canada to help with the fallout from Fiona, a post-tropical storm that caused widespread destruction in the region.

In Cape Breton, the military has established a command post at Sydney’s Mayflower Mall to deploy troops as needed to clear fallen trees and other pieces of debris that have made some roads impassable. Military personnel are doing much the same in P.E.I.

Anand said Canadian Rangers have conducted more than 900 “wellness checks” in Port aux Basques and other communities along Newfoundland’s coast that were pummeled by Fiona.

Asked by reporters why she didn’t deploy more troops to the region sooner to help with recovery efforts, Anand said it’s up to the provinces to tell Ottawa what they need.

“What we made sure to do was to have CAF members on hand to fill the tasks that were requested of us,” she said.

“The provinces are identifying tasks and we are providing CAF to fill those tasks on an ongoing basis.”

The region has seen a small surge of troops during the week as the scale of the damage became evident. There were just 300 CAF personnel in the region on Monday.

The Magdalen Islands, an archipelago in the Gulf of St. Lawrence in the province of Quebec, were also damaged by Fiona.

So far, Quebec has not requested any federal assistance or CAF support to help with the cleanup.

As part of his ongoing tour of the storm-hit region, Prime Minister Justin Trudeau will visit the Magdalen Islands Thursday to personally assess the damage there. He visited Nova Scotia, Newfoundland and Labrador and P.E.I. earlier this week.

One pressing issue is the state of the ocean after so much debris was washed away by a violent storm surge. In Port aux Basques, downed homes are still floating offshore. Some fishermen lost their gear in the surge and it hasn’t yet been recovered.

Rural Economic Development Minister Gudie Hutchings, who represents this area of Newfoundland and Labrador in the Commons, said the province has asked for federal help to clean up the waters so fishermen and other boats can safely travel.

The restoration of the waterways is a priority. Port aux Basques is also the terminal for Marine Atlantic, the federal Crown corporation that ferries people between Newfoundland and Cape Breton.

According to government figures, the Canadian Coast Guard is already patrolling for sunken vessels in the region and 23 boats have been removed so far.

Fisheries Minister Joyce Murray said more than 180 of the 706 small craft harbours that the Department of Fisheries and Oceans (DFO) operates were damaged by Fiona.

She said DFO is working with local harbour authorities to assess the damage and “chart a path to rebuilding.”

Based on department surveys so far, 99 of the harbours are operational, five are out of commission and 20 will need further assessment.

“We expect the number of non-functional ports will increase as inspections are carried out. Harbours will need to be rebuilt to withstand these conditions,” Murray said.

With so many fishermen sidelined by Fiona, Murray said her department will consider “any requests for season extensions” to allow harvesters to haul in fish and other seafood outside the normal DFO-mandated seasons.

Farmers were also hit hard by Fiona, with crops wiped and out fields flattened. The storm touched down at an inopportune time for some farmers because apples and corn were just due to be harvested.