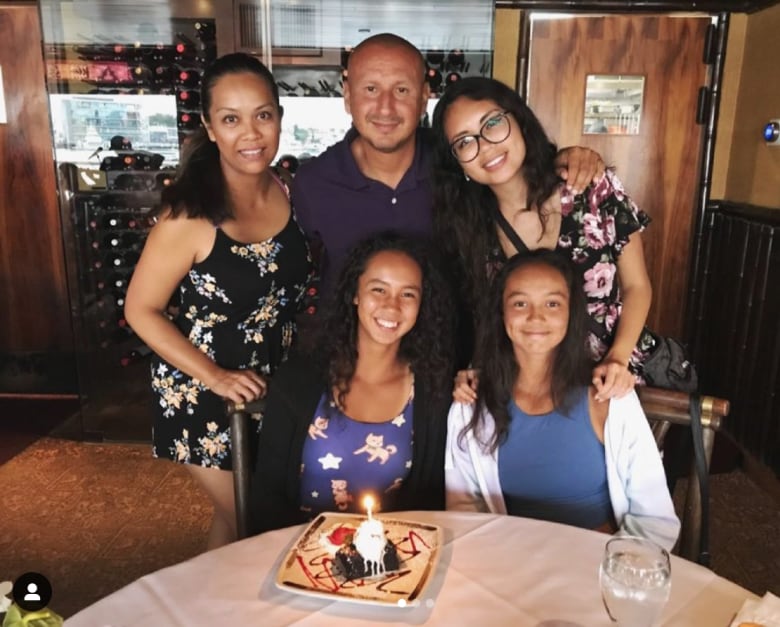 As a young girl, Leylah Fernandez first dreamed of becoming a soccer player, just like her father. But he had other ideas.

“I don’t believe a child should go into a sport because her parents are in it,” Jorge Fernandez said. “I want it to belong to her.”

A little more than a decade after picking up a racquet, Fernandez, 19, has convincingly laid claim to tennis, preparing to compete in the U.S. Open semifinals, the most important match of her career to date.

She took New York by storm and by surprise, defeating defending champion Naomi Osaka and former world No. 1 Angelique Kerber — but Montrealers who know her from her childhood say it was a long time coming.

The rising tennis star had to overcome pushback on her home turf long before getting her shot at a match in Arthur Ashe Stadium.

As a budding tennis player, she learned the sting of rejection early in her career when Tennis Quebec’s development program dropped her when she was only seven years old.

“When she found out, she was really heartbroken,” Jorge said, holding back tears.

“Some kids get disappointed and then they’re off to the next new toy, but she felt it.”

Since then, Jorge has coached his daughter, despite not having any previous tennis experience.

Early on, he entertained the possibility of her wanting to quit after a couple of years, but she never did.

Love-Star Alexis, a high school friend of Fernandez at École secondaire Antoine de Saint-Exupéry who used to practise with her on the tennis courts, says she knew her former classmate always had the potential to become a superstar.

Alexis said she remembers Fernandez spending at least three hours a day on the courts, repeating the same shots over and over with her father, and devoting an additional hour to fitness training.

“A lot of people don’t put in that much work and also manage school,” Alexis said. “I remember people would say ‘Oh my God, she’s so crazy for training so much, it’s not going to lead anywhere,’ but she proved the exact opposite.”

Her former high school classmate Kylian Mairesse says the reserved Fernandez often missed class for competitions, but her fellow students celebrated her victories — if they found out about them.

“She wasn’t someone who ever bragged about winning,” he said.

Sylvain Bruneau, head of Women’s Pro and Transition Tennis for Tennis Canada, said he recalls Fernandez’s sheer determination to succeed, even at age 11.

“She’s not a big player, but she has a huge heart and huge determination,” he said.

“I was really impressed, even then, with her ability to take the ball so early … [and] just the way she was able to focus for 90 minutes non-stop.”

“In the tennis world these days, the girls are extremely big and very tall and strong, and she’s a little different.”

Bruneau said Fernandez’s agility and, above all, her mental strength compensate for her “schoolgirl” stature, adding that her success in the game would popularize tennis among young women.

“I think she shows everybody, if you really want it bad and you’re willing to do whatever it takes, everything is possible,” Bruneau said.

Despite her newfound fame, her father says coming from a “two-car and mortgage” home keeps Fernandez grounded.

But he, like those who knew her as she worked to greatness, also understood that Fernandez’s determination would take her places.

“It’s expected. We trained so hard,” he said.

“It was just a matter of waiting for it to transition to the big stage.”