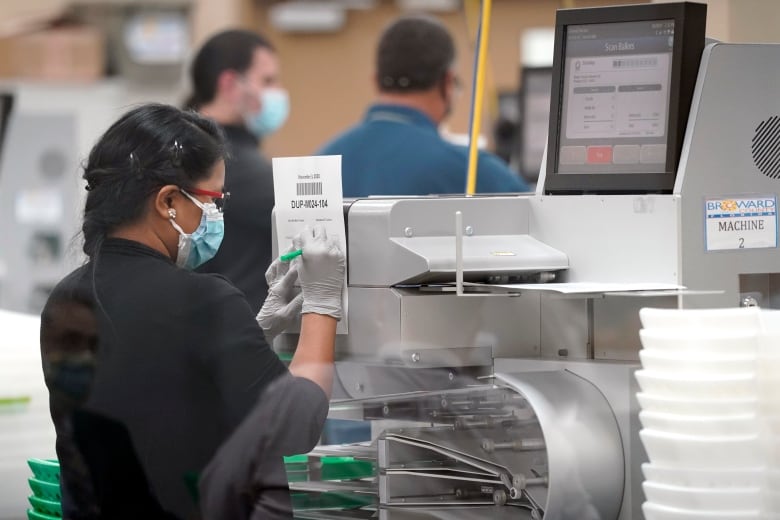 This story idea came from an audience member, like you, who got in touch with us. Send us your questions and story tips. We are listening: ask@cbc.ca.

We are living in the Digital Age, so you would think our federal elections wouldn’t be too far behind. That’s why some Canadians are scratching their heads over what might seem to be outdated voting procedures.

Some CBC News readers have asked us if Elections Canada will still be using paper voter lists at the polls, and if they will be counting ballots by hand once the polls close.

The short answer is yes, on both accounts.

The primary reasons for keeping things low-tech are election security and Elections Canada’s high standards for performance, the agency says.

“We would only use a solution that met these very high standards, which proved challenging to the industry,” Elections Canada told CBC News.

Why we don’t use electronic poll books

In 2018, the agency planned to run a limited trial of electronic poll books during the fall by-elections. This would have included tablets running a specialized software to help with some tasks, like checking names off the voters’ list and completing registration forms.

But before the by-elections could happen Elections Canada says it became clear the technology could not meet the agency’s rigorous standards and the agency decided not to deploy the electronic poll books.

Aleksander Essex, an associate professor of software engineering at Western University who specializes in the cybersecurity of voting technology, says the decision to use paper voter rolls is more about reliability than cybersecurity.

“Paper is just reliable,” Essex said. “I’ve worked in federal elections as a deputy returning officer and as a poll worker. And the paper doesn’t have a software crash. It’s just there.”

Why we are still hand counting ballots

When it comes to automated ballot counting, Elections Canada says even though it doesn’t use ballot-counting machines, officials acknowledge they are used securely in other elections.

Much like paper voter rolls, Essex says hand-counting ballots may be a simple system but a good one nonetheless.

“When you count the ballots at the end of the night, you literally open a cardboard box and put them out on the table and you just count them up and the candidate representatives are standing there watching you.”

“It’s very intuitive and makes a lot of sense,” Essex said. “And everyone can witness it with their own eyes.

“The real question is, what is the digital version of that?

If the plan is to introduce automated ballot counting, Essex says the same level of assurances that you get from hand-counting ballots with witnesses in the room, would need to be built into any new system.

In order to do that, Canada would first have to create a law or ordinance that clearly sets that standard, he said. Then any proposals would have to meet that requirement for evidence and assurance.

Why Canada is careful to introduce new voting tech

Elections Canada says they take a “cautious and incremental approach” to technology.

Essex agreed with the logic and even goes as far as to invoke an idea illustrated in the 1993 blockbuster Jurassic Park: Just because you can, it doesn’t mean you should.

Of course, in this context, instead of an exciting, fear-filled romp through a dinosaur clone theme park, the conversation is slightly duller — one about tactfully introducing voting technology.

Elections Canada’s somewhat boring approach to technology might actually be a good thing, according to Essex.

“There’s this idea of something that can be boring in a good way,” Essex said.

“In our society, everything is supposed to be exciting … but when it comes to serious matters, you want a serious organization.”

Elections Canada tells CBC News that they are open to new methods that would “improve the voter experience and reduce the burden on poll workers,” but they have not revisited any projects that would introduce technological upgrades since 2018.