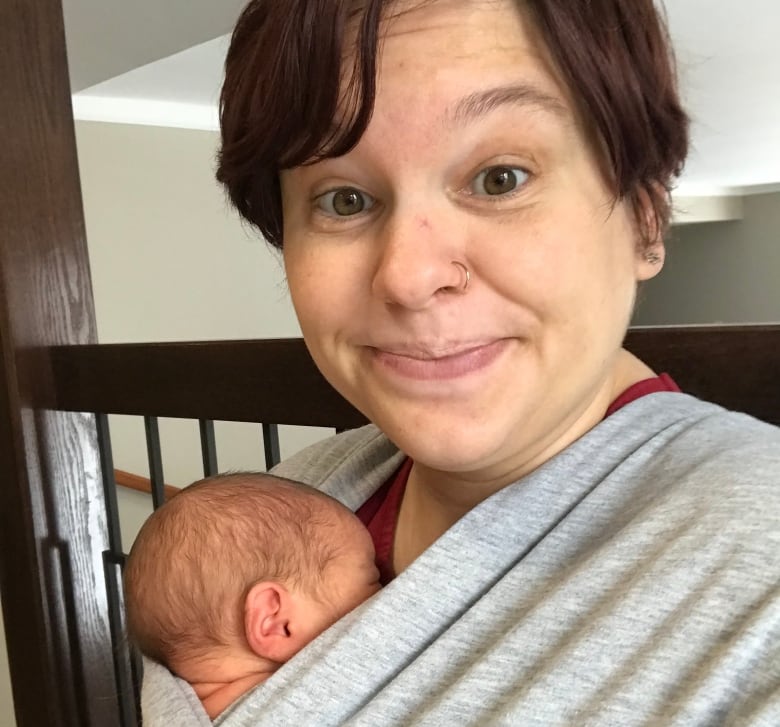 A Manitoba mother with postpartum depression says she was dismissed by an emergency room physician last month when she sought help after having suicidal thoughts.

Delsie Martin, who has a six-month-old son and a two-year-old daughter, said she had been having persistent thoughts of dying when she asked her husband to take her to the Neepawa Health Centre on a Sunday afternoon in August.

But she says a doctor at the hospital in the southwestern town sent her away without any treatment or referrals to other services.

“He gestured to my husband and he said, ‘Look at this wonderful man sitting here and your two children at home. You have no reason to be depressed,'” said Martin.

The 34-year-old says she told the doctor she was taking medication for postpartum depression, which she suffered from after her first child as well.

A health-care team in her home community, in Manitoba’s Interlake, was treating her, but she says she reached a breaking point while visiting family in Neepawa.

“That day my thoughts became so overwhelming and they were racing so fast … [that] suddenly thoughts of dying that I was able to logically talk myself out of [before] were becoming a lot more logical,” said Martin.

The first thing the doctor asked her about was what kind of birth control she was using, she said.

“He said that I shouldn’t have any more children.”

Martin also told him about other sources of stress in her life — child care, schooling and finances.

“Then he referred us to some sort of financial planner that’s out of the States and said that if I get financial planning [and] if I don’t have babies, I’ll be fine,” Martin said.

After a 20-minute visit, the doctor told her there was nothing he could do for her, she said.

She left the hospital feeling ashamed and judged, she said, without any referrals to other services.

Martin, who has worked as a social worker and a mental health support worker for the last decade, says there is stigma surrounding mental health, especially postpartum depression.

But even in crisis she knew what happened to her was not right, and she grew more upset about the interaction in the following days.

“Someone’s going to go and attempt suicide, possibly die by suicide if they get treated like this.”

Martin reached out to the hospital days later to find out the name of the doctor who saw her, but didn’t get a call back. She sent a letter detailing her encounter and her concerns to the patient relations department at Prairie Mountain Health, the regional health authority that covers Neepawa.

A spokesperson said the health authority “strictly adheres to confidentiality” and can’t speak to details related to a specific case, but said its patient relations department had been contacted.  Any followup “will be done directly with the patient,” the spokesperson said.

Martin says she spoke with someone from patient relations and felt heard, and is satisfied that there will be a conversation with the physician about how the experience affected her.

Gaps in the system

Jaime Charlebois, who works a group that advocates for mental health care before, during and after pregnancy, says experiences like Martin’s happen far too often.

“We hear from people across Canada about how when they do reach out for help, how difficult that is,” said Charlebois, the co-executive director of the Canadian Perinatal Mental Health Collaborative.

“There is fear that if we talk about our mental health, there’s fear of apprehension of your baby and pieces like that.”

The organization is calling for a national perinatal mental health strategy, something Charlebois says would help guide health-care practitioners on when and how to screen postpartum patients, and what treatment options are available.

“There are so many gaps in our system that places the onus on these individuals … to seek help themselves, when they are struggling so severely,” she said.

“This is just unethical. In other places around the world they have screening programs, they have perinatal mental health specialist teams, they have mother-baby psychiatric units in case a woman requires an in-patient stay.”

Martin stressed that she doesn’t want her experience to discourage others from seeking help — a point Charlebois echoed.

“Please reach out for help,” said Charlebois. “Don’t let one bad situation deter you from seeking the help that you need. Get a second opinion.”

Martin says she is now getting excellent care in her home community, but wants to draw awareness to the importance of mental health training for medical professionals.

“I hold no anger, no malice, toward this doctor at all, because I honestly believe he thought he was doing the right thing.

“I don’t think he knew how much he was hurting me. But that’s what’s scary.”