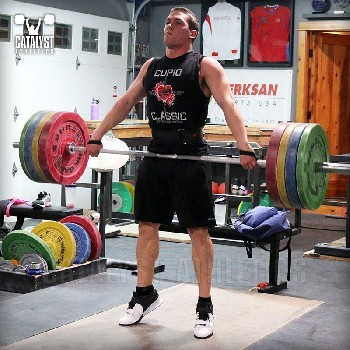 It’ll take me a minute to get to the main point on this one, so just hang with me. I promise it’ll be worth it.

Not too long ago, a powerlifter named David Ricks set a raw world record in the squat. “Raw” in powerlifting means the lifter is only allowed to use a spandex lifting suit, a belt, and knee sleeves. In other words, the same basic equipment Olympic lifters use. Ricks squatted 325 kg (716 lbs) in the 93 kg weight class (204 lbs).

This is an incredible number, but I know the Olympic lifting crowd is already loading up with the, “Big deal, lots of top international Olympic lifters in the 94 kg weight class could squat 325 kg” argument. And that’s true.

However, there’s a small detail I forgot to mention: David Ricks is 58 years old.

58 years old, squatting 716 lbs at 204 lbs bodyweight. My friends, this is one of the most phenomenal feats of strength in the history of the human race. Absolutely no question about it.

So aside from how mind-warping that number is, let me start to move towards the focus of this article. After squatting his world record, Ricks did an interview where he outlined his training program, which I absolutely loved. Want to know why I loved it so much? Because his training is remarkably basic. For the sake of brevity, I’m not going to go into the details of it. Suffice to say he’s basically doing the same linear progression type of training I learned when I was a teenage powerlifter back in the 1980s. It’s extremely uncomplicated, using bare-bones training methods that have been around for decades. Nothing innovative. Nothing we haven’t seen a million times.

Now let me show you where I’m going with this. About a year ago, I was at the Olympic Trials, having a conversation with a young weightlifter who’s doing some big things at the national level these days. We were chatting about training, and he said something that stuck in my mind. His statement was, “You can’t train the same way everybody used to back in the old days. Weightlifting has evolved.”

Weightlifting has evolved, and you can’t train the way we used to anymore. I’m not sure how I feel about that.

Actually, I take that back. I’m totally sure how I feel about it. It’s wrong.

In case you don’t know, the sport of Olympic weightlifting has changed its bodyweight classes a couple of times over the last 25 years. All the old world records from the old weight classes were erased, and new records were started in the new weight classes. These are the records you know about now.

Let me give you a few of the old world records, okay? Here’s a short list:


Now, let me point out two clear facts about these numbers:

Despite the alleged “evolution” of weightlifting, many of the results from the old days, which were obviously done using old training methods, still haven’t been topped.

It should be obvious where I’m going with this discussion. Because weightlifting’s popularity has erupted over the last ten years, many people are on the lookout for new cutting-edge training ideas. It makes sense. More weightlifters = more coaches = more desire for success = more desire for advanced ideas = more people coming up with new training methods that are superior to old training methods.

And there hasn’t been a shortage in this department. Because the weightlifting eruption has happened during the internet age, there’s an ocean (or swamp, depending on how you look at it) of coaches in the sport promoting innovative training approaches that supposedly blow the crusty old 80s and 90s training ideas out of the water. It all leads to modern generation lifters believing the same thing this young lifter said to me at the Trials…that weightlifting is a different ball game nowadays and you have to train differently if you want to make it to the top.

However, I refuse to drink the Kool Aid. To me, it’s a lot simpler than many people think it is. If a certain set of training methods produced results 30 years ago that are superior to the results that are being produced now, it’s impossible to believe that those old methods are inferior to the current ones.

Because I’m older, there’s a risk for me when I make this argument. People can hit me with the “He’s an old-timer who’s hanging on to yesterday” label. I sound like a geezer sitting on my front porch with a shotgun, yelling at kids to get off my lawn and crabbing about how things ain’t like they was in my pappy’s day, dagnabit.

Sure, fine. However, weightlifting is a totally measureable sport. When the measurements prove the fact that old methods led to higher results than new methods, it becomes a little tougher to toss the old methods aside and laugh at them.

And don’t try to lecture me about the impact of world political changes over the last 30 years and how they’ve affected out sport. I know the collapse of communism in the Eastern Bloc changed a lot about weightlifting. But it’s all the same now as it was back then. Only the names have changed. China, Russia, Kazakhstan, and Iran are simply the newer versions of Bulgaria, USSR, East Germany, and… China.

All I’m trying to establish with this article is the idea that it behooves all of you to think a little differently than the current weightlifting culture often thinks. Newer doesn’t necessarily equal better. There’s obviously more to this discussion that what I’ve written, and I’m not trying to prove the world is round in 1000 words. Just trying to give you some food for thought, based on some pretty damn big lifts.