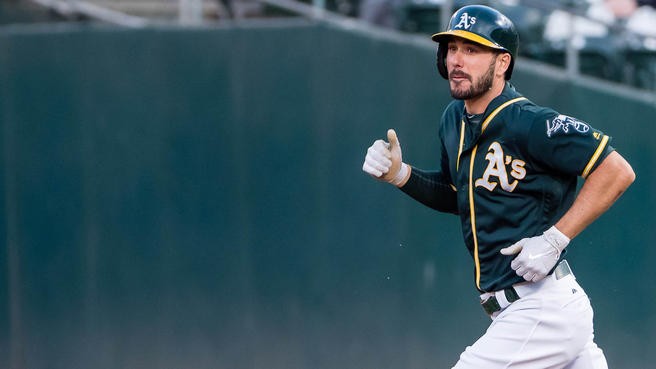 The Oakland A’s selected Austin Beck with the No. 6 overall pick in the 2017 MLB Draft. The 18-year-old is an outfielder from North Davidson High School in North Carolina.

After taking college players in the first round of the last three drafts, the A’s went back to the high school hitting ranks for the first time since 2013 when they chose outfielder Billy McKinney (now in Yankees’ system). The year before that, in 2012, they had three 1st-round picks and used them to take high school infielders Addison Russell, Daniel Robertson, and Matt Olson, all of whom have played in MLB this year.

Here’s a scouting report on Beck from MLB Pipeline:

After Beck tore the anterior cruciate ligament and meniscus in his left knee last May, he missed the entire showcase circuit last summer and fall. When he returned to the diamond this spring, he quickly displayed some of the best all-around tools available in the 2017 Draft. The North Carolina recruit has gone from forgotten prospect to potential top-10-overall pick.

Beck generates well-above-average bat speed from the right side of the plate. Some evaluators put similar grades on his speed and arm strength, though the consensus is that those tools are more plus than plus-plus. He should be a solid defender as well, though his instincts draw mixed reviews and he may wind up in right field rather than center.

The one thing Beck doesn’t have is a history of solving quality pitching while swinging a wood bat. Some scouts worry that there’s a lot going on his swing and believe he’ll have to streamline it. If he hits and taps into his power, he has 25-25 potential and should become a star.

Hot take: I like this pick, and he’s one of the players Athletics Nation was most hoping for. He was one of the best players available so the A’s didn’t reach down talent-wise with their valuable top selection, and that’s my main priority overall — go all-in on such a top-10 pick and then worry about the rest of your draft class afterward, rather than trying to get fancy with bonus pools.

Beck is also a good fit for the A’s system, although such concerns should be secondary when talking about the MLB draft because landscapes tend to change faster than prospects develop. He’s an outfielder, which Oakland clearly needs, and he’ll start lower down the system than a college player would — that should help considering how logjammed the entire farm is right now with worthwhile names.

Now allow us to start dreaming about a 2021 outfield that features Beck and Lazarito side by side.