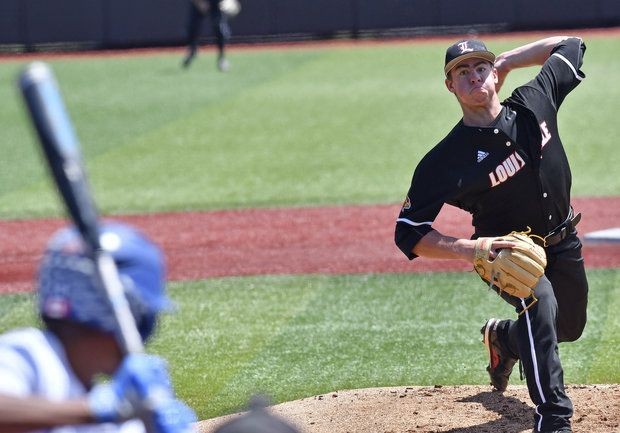 The 2017 MLB Draft is well into its second day, with teams making their picks from Round 3 through Round 10. The A’s stocked up on outfielders in Day 1, including a top high schooler and a pair of college bats. Let’s see what they do for an encore on Tuesday!

Scouting grades/reports are from MLB Pipeline.

Summary: Undersized shortstop; strengths are speed and defense; line drive hitter, but no power. He’s ranked higher than the two college hitters Oakland took on Monday, according to all major sources (30s, rather than 50s/60s). Here’s more from John Sickels.

Looks like the A’s reached down for a couple underslot guys in Merrell and Diechmann, and now are using the savings on a top prep player in Allen, which is on par for their normal draft approach (Szynski and Chalmers are past examples). One way or other they’ve ended up with four of the top 60ish prospects. As an extra bonus, entering the day Allen was the guy Athletics Nation specifically wanted with this pick.

There might not be a player in this Draft class more universally liked by area scouts than Allen. Getting decision-makers to sign off on taking a 5-foot-8 shortstop early will ultimately determine when the Southern Cal commit hears his name called in June.

The one thing no one questions is Allen’s ability to stick at shortstop. He is a plus defender with outstanding range and more than enough arm to make throws from all over the diamond, making highlight reel plays with regularity, even on big stages like the Perfect Game All-American Classic. While Allen will never hit for power, he has added some strength in his lower half and should be able to continue to do so as he matures, allowing him to shoot the ball to the gaps. He’s a plus runner with outstanding instincts, so he can stretch singles to doubles and doubles to triples. Allen does play his home games on turf, so some of his times might be a bit inflated, but no one doubts his skills play on any surface.

Allen endears himself to scouts even more with his outstanding makeup and baseball IQ. His supporters see a Jose Altuve type profile, albeit one with less power, but who can stay at short. The success of an undersized player like Altuve might help allay some concerns and help Allen come off the board in the early stages of the Draft, though there are bound to be some teams who won’t take a player his size in the first round.

Summary: A case of tools vs. stats. His tools are unimpressive, at least on the offensive side of the ball, but he spent the last two seasons walking more than he struck out in one of the top college conferences, and last year he posted a 1.077 OPS. It appears the A’s sided with the tangible production and are betting he can build on his recent success, and as a bonus he at least has above-average defensive skills.

A baseball and hockey star at Salisbury (Conn). Prep, where his brother John coached him in both sports, Toffey turned down the Yankees as a 23rd-rounder in 2014 to attend Vanderbilt. He started from day one with the Commodores, playing on their 2015 College World Series runners-up before slumping as a Draft-eligible sophomore in 2016, when the Orioles took a flier on him in the 25th round. He got back on track in the Cape Cod League last summer and has been Vandy’s best hitter this spring, leading the Southeastern Conference in walks (46) and ranking second in on-base percentage (.472) heading into the NCAA playoffs.

Teams that rely on analytics will like Toffey more than clubs that place more emphasis on pure tools. He controls the strike zone very well and his numbers are trending in the right direction; he has improved his walk and strikeout rates each year and hit for more power than ever in 2017. Some evaluators wonder if the left-handed hitter has enough bat speed to hit for the average and power demanded of third basemen at higher levels, however.

Though he’s a fringy runner, Toffey provides quality defense and solid arm strength at third baseman. Even scouts who question his tools give him credit for his makeup and competitiveness.

Summary: Your guess is as good as mine. Minor League Ball has him ranked No. 452, soooo the A’s reached for this one (hopefully he was low because of signability and not talent?). They do need catchers, though he’s a high schooler so he will surely be a long-term project. 80-grade name, for what that’s worth.

Summary: Finally, the first pitcher of this draft class. He’s currently a reliever, but we’ll see what the A’s decide to do with him in the pros. He’s undersized for a pitcher at 5’11, though that doesn’t usually bother Oakland.

One of the top college senior prospects in the 2017 Draft, Salow could go in the top five rounds — and not just because his reduced leverage will mean he comes at a discount. After battling his control and going undrafted in 2016, he emerged as one of the best relievers in the Southeastern Conference this spring. He allowed just one run in his first 29 innings, retiring 24 consecutive batters at one point, before getting hit a bit harder down the stretch.

Salow’s bread and butter is a slider that sits in the mid-80s and reaches 87 mph. It can eat up left-handers and he can bury it on the back foot of right-handers. His fastball usually ranges from 90-93 mph and he also can mix in a changeup.

After showing iffy control in his first three years with the Wildcats, Salow has attacked the strike zone in 2017. Though he has been so successful coming out of the bullpen and easily profiles as at least a lefty specialist, a pro team could look at his three pitches and improved control and try him as a starter. He did well in that role in the Northwoods League last summer, though it remains to be seen how his stuff would hold up with an increased workload.

Summary: The A’s are now firmly in the college senior portion of the draft, which suggests that they’re saving money because they think their earlier picks are going to cost more than their slot values. That’s fine with me, because it means they think they maximized those top picks, and I’d rather go all in on the top few because that’s where you’re more likely to find success. Dunshee doesn’t show up in Minor League Ball’s Top 500, but he did strike out more than a batter per inning the last two years as a starter.

Here’s more on Dunshee and his decision to return to college after being drafted by the Cubs last year (via Study Breaks).

Summary: Another senior pitcher. Howard at least made the Minor League Ball Top 500 (#364), and like Dunshee he spent the last two years striking out a batter per inning as a starter. He stands 6’9, 185, so he can teach Jerry Blevins a thing or two about being tall and thin.

Summary: Another senior pitcher, and our second LSU player (after Diechmann). He threw a no-hitter on Opening Day this year, and came one inning away from a repeat the next week. Yes, there is an apostrophe at the end of his name. Here’s Poche’ describing his arsenal, via Minor League Ball:

“I throw a four-seam fastball, a two-seam fastball, a couple different variations of my curveball and a changeup. Each pitch has a lot of room for improvement. I’m trying to get the practice I need to have the feel for it in a game.”

Summary: A fifth straight college senior to round out the day, but this time he’s an outfielder. His father was also the manager of his Huskies team. Here’s more about him from Washington’s team site, including his disappointment at not getting drafted last year and his status as a team player. His stats are not very good, if we’re being honest, but let’s reserve judgment until we see what he does in the pros.

My initial reaction to this draft is that the quality will be determined almost purely at the top. Seems (for now) like they phoned it in for Rounds 6-10, taking flyers on interesting college seniors, and hopefully that’s because they blew their whole wad on expensive, top-notch talent in the earlier rounds.

I love the Beck pick, and nabbing Allen late makes me comfortable with the reaches they made for Merrell and Deichmann — in other words, I’ll just pretend Allen was the Comp A pick rather than the 3rd-round pick and then everyone will make sense in their draft slots. The wild card here might be Sanchez, whom I know nothing about; is he a big deal, or a relative placeholder like the college seniors after him?

It’ll be years before we know how well this draft class pans out, and even longer since the top two names are high school teenagers.