Missed your flight? Denied boarding? Be prepared to pay 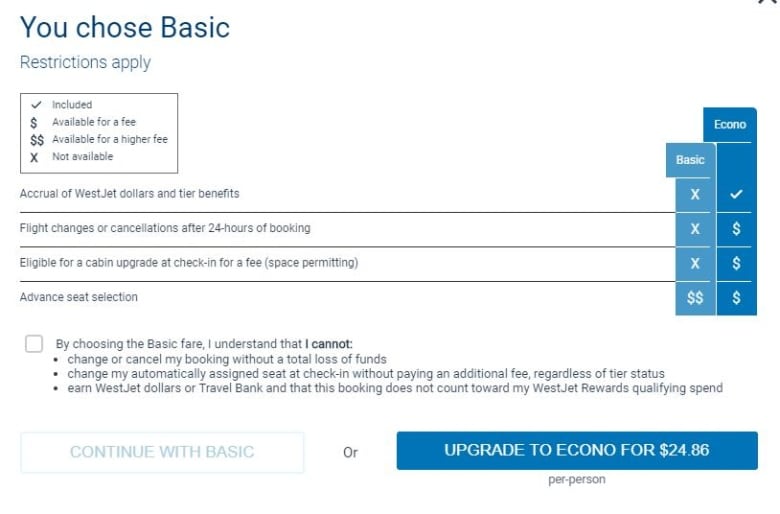 Nova Scotia resident Ron Corkery couldn’t believe it when he and wife were told by WestJet they had missed their connecting flight and their return flight this summer was cancelled.

Corkery said the airline’s counter agent told him that because they had missed their basic economy connecting flight in Toronto, their return flight was automatically cancelled and there would be no refund.

“I thought she had to be wrong,” said Corkery, of Dartmouth.

“I didn’t think that legally that could happen to anyone in Canada.”

Although what happened to the couple is legal, not everyone realizes it, and when they do, it comes as a shock — financial and otherwise.

Ron and Marina Corkery had booked basic economy flights for a June 26 trip from Halifax to London, Ont., via Toronto. They planned to attend their granddaughter’s graduation in Chatham, Ont., and visit with family for a week.

They didn’t worry about missing their connecting flight because they arrived in Toronto two hours before they were scheduled to head to London.

But then WestJet cancelled the flight to London.

However, the airline subsequently reinstated it. The couple said the airline changed the gate from 18 to 40, leaving them to rush to the new gate. Eventually, they found a motorized cart to take them there.

They arrived just as the plane door had closed. That’s when they were told they would need to purchase new tickets. They were also told their luggage was on the flight to London.

‘The anxiety was terrible’

“The anxiety was terrible,” Ron Corkery said. “We had to run around from bus stations to car places for over two hours trying to find a way to go get our luggage, and that wasn’t even our final destination.”

In the end, it was a big expense for the couple, who eventually returned home on July 3 as planned.

They paid $313 to rent a car for one day to get to London. The cost was only a dollar less than they paid for the entire price of the rental they had booked in London for a week.

Return airfare for both was $1,176, more than the original $978 there and back. WestJet did credit them $200 for the new tickets they had to purchase.

The couple said they had never heard of the policy. Neither had their family and friends.

“It is not being fair to your customers,” said Marina. “Why would you want to take advantage of people?”

In an email to CBC, WestJet spokesperson Morgan Bell said the airline understands the matter was disappointing for the couple, “and for that we apologize.”

She said gate changes are posted on all airport terminal screens and announced in the airport by WestJet staff “from the moment the gate is changed.”

Bell also noted basic fares are provided by WestJet for guests looking to fly at the lowest price without added features or flexibility.

She said WestJet tries to ensure that guests are aware of restrictions with multiple prompts throughout the booking process where guests are required to acknowledge the restrictions before purchase.

Bell said if a customer misses a flight or connecting flight while travelling on basic fare, “subsequently all additional segments of this ticket are forfeited.”

She said WestJet believes the vast majority of its passengers are aware of what they are purchasing and the restrictions that come with it.

The Corkerys said the language during booking is unclear about losing the return flight.

WestJet’s policy is also outlined in its tariffs, which the Canadian Transportation Agency describes as the contract between an air carrier and its passengers. The CTA says carriers must respect the tariffs at all times.

Air Canada has a similar position in its tariffs.

Bruce Cran, president of the Consumers’ Association of Canada, said it’s “absolutely outrageous” that a missed flight results in the loss of the rest of the booking.

Cran said his organization has heard from many people unaware of the policy, which he said can result in big expenses.

“I really don’t see any justification of it on the part of the airlines,” he said, adding he wants to see government step in and change it.

He urges people to book separate flights to and from their destination so they can avoid this kind of thing from happening.

Airlines have instituted the policy, in part, because of something they call point-beyond ticketing — when a traveller books a ticket at a lower fare with a connection to a destination and disembarks at the point of the connection. The traveller doesn’t proceed with the rest of the scheduled flight.

But that is not the case with the Corkerys.

Gabor Lukacs, an airline passenger rights advocate, said there is concern about fairness to the passenger when subsequent flights are cancelled. That’s because the airline is making money for the return flight even though the passenger is willing and available to take the flight.

“That raises a concern of unjust enrichment,” he said.

But Lukacs sees an even bigger issue in the Corkerys’ case, one of “constructively denied boarding.” He said that is something that was weakened when the new air passenger rules came into effect on July 15.

He said WestJet had an obligation to inform passengers about the new gate and give them enough time to get there.

“It is not enough to just announce it on a loudspeaker if it’s at the other end of the airport,” Lukacs said, especially if the passenger has a disability and may not be able to walk quickly. That is the case for Marina Corkery.

Lukacs said if the airline just announces a sudden gate change that is far away, then quickly loads the plane and departs, it is effectively leaving behind passengers.

“They were at the gate,” Lukacs said. “They were willing and available to fly. They were not allowed to board a flight in which they had tickets.”

He said passengers can sue for breach of contract and damages under the new rules, but seeking denied boarding compensation has become more difficult.

Lukacs points to the European rules, calling them the gold standard of passenger rights.

“This would undoubtedly be a denied boarding case regardless of whether the flight was overbooked or not,” he said. In that case, the rest of the flights would not have been cancelled.”

He said in Europe, the Corkerys would have been entitled to 250 euros ($364 Cdn) each for denied boarding, plus reimbursement for the car rental to get them to London and the cost of the return tickets they had to buy to get home.

Lukacs’s Air Passenger Rights group has started a campaign to get the rules around denied boarding changed.

“We think the definition of denied boarding has been unreasonably and excessively narrowed and that has to be fixed.”

He’s also urging Canadians to ask federal candidates for next month’s election whether they support expanding the definition. He said people can do that by going to his organization’s website and clicking on the appropriate form.

As for their luggage being sent on a plane with the owners, WestJet said checked baggage can be transported to the final destination if a guest arrives at the gate past cutoff and there is insufficient time to offload the baggage for an on-time departure.

CBC asked Transport Canada whether that was acceptable.

In an email, Transport Canada spokesperson Alexandre Desjardins said there are requirements for baggage to be transported aboard aircraft with the passenger, but exceptions are made in certain situations that may result in the checked baggage being transported separately.

However, she said: “The details of these exceptions cannot be released for security reasons.”

The Corkerys aren’t giving up their fight to get reimbursed for the additional car rental and their return flight. They plan to take WestJet to small claims court.