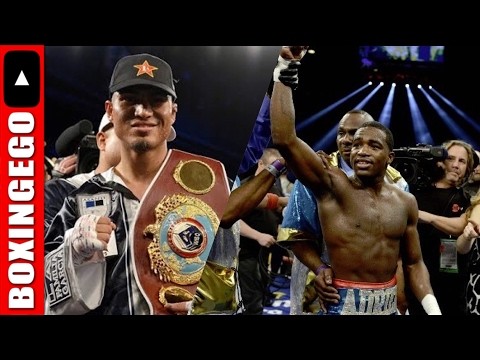 NEW YORK — Mikey Garcia, already a three-division world titleholder and one of the best fighters in the world pound-for-pound, added impressively to his résumé Saturday night.

Garcia, a reigning lightweight titleholder, moved up to junior welterweight and put on a masterful performance as he easily outboxed and outfought Adrien Broner to win a unanimous decision before a crowd of 12,084 at Barclays Center in Brooklyn.

Broner, a former four-division world titleholder, moved down in weight from welterweight for the fight but was a considerable underdog in a nontitle showdown between two of the top names in boxing. The fight came together when neither could find a top opponent in his own weight division to fight this summer.

Mikey Garcia, a reigning lightweight titleholder, moved up to junior welterweight and put on a masterful performance in scoring a unanimous decision win over Adrien Broner on Saturday night in Brooklyn. Elsa/Getty Images

In the end, it was all Garcia, whose technical superiority was obvious. His punches were precise, crisp and accurate, with few that were wasted. Broner? He didn’t throw much at all, rarely threw combinations and did not do much of anything, except shake his head after getting hit as if to say, “That didn’t hurt.”

“This is definitely one of my best performances ever,” Garcia said. “I think I controlled the fight in the early rounds, and I kept the activity up. [Broner] is a great fighter who has great skills. I was the superior fighter tonight.”

The first couple of rounds were slow, but then Garcia landed a hard left hand in the third round that had Cincinnati’s Broner, who turned 28 on Friday, in a little trouble and looking to get away. Garcia continued to stalk him and landed a few more shots. Broner shook his head as if to say he wasn’t hurt, but he clearly felt the punches.

Garcia (37-0, 30 KOs) continued to work the body and stick his jab against Broner, who barely threw any punches. When he did throw shots, they were one at a time and not nearly enough to do any damage.

Broner’s lack of activity was shown in the CompuBox punch statistics. While Garcia landed 244 of 783 punches (31 percent), Broner connected with only 125 of 400 shots (31 percent). Broner never threw more than 44 punches in a round, while Garcia averaged throwing 98 per round over the final three frames.

“It was the timing,” Garcia said. “I’ve always said I have very good timing. It is underestimated when you are outside the ring, but once you get inside the ring with me, I’m a step ahead. We trained for 10 weeks. We had a great training camp and great sparring. We knew it was going to be a tough fight, so we had to be in great shape. It was part of the strategy to be a little busier than the fights I have previously had.”

Yet while it was Garcia who was aggressive and came forward and threw and landed way more punches, Broner accused him of running.

“It was Tom and Jerry. I had to catch the mouse,” Broner said.

He never did or came close, which Broner trainer Mike Stafford acknowledged.

“Adrien followed Mikey around just a little bit too much,” he said. “Mikey did really well. Adrien should have gone to the body earlier.”

It was more of the same in the sixth round, when Garcia continued to land combinations against an inactive Broner, who had no answers.

With Garcia dominating, the crowd came to life in the eighth round and began to chant “Mikey! Mikey! Mikey!” But while it was an outstanding performance from Garcia, the fight, which had high expectations, lacked excitement because of Broner’s inactivity and ineffectiveness.

Broner landed a good left hook late in the ninth round, but it did not seem to be nearly enough to win the round.

“This is definitely one of my best performances ever. I think I controlled the fight in the early rounds, and I kept the activity up. [Adrien Broner] is a great fighter who has great skills. I was the superior fighter tonight.”

Broner had a lot of fans in the crowd, and they tried to lift him in the 10th round with chants of “AB! AB! AB!” But they couldn’t box for him, and Garcia continued to pick Broner apart for the rest of the fight.

“We knew Mikey would have to fight smart,” Robert Garcia, Mikey’s trainer and brother, said. “[Broner is] a tough guy who finishes very strong. We had to fight smart for the whole 12 rounds.”

Garcia, who defeated the most well-known opponent of his career, has won world titles at featherweight, junior lightweight and lightweight. He has looked tremendous in all three of his fights since last summer, when he came off a two-and-a-half-year layoff caused by a lengthy legal battle with former promoter Top Rank.

In the second fight of his comeback, Garcia won a lightweight world title by a crushing third-round knockout of Dejan Zlaticanin on Jan. 28 in Las Vegas. Unable to get a unification bout, Garcia agreed to move up in weight to fight Broner. After his domination of Broner, Garcia is in the enviable position of having options at both lightweight and junior welterweight, where he would fit in for any major fight. He has also left open the possibility of going up to welterweight for a major fight.