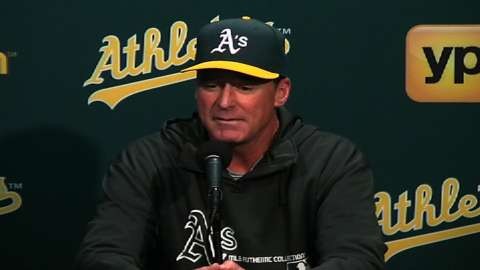 The Oakland A’s beat the Twins on Saturday, giving skipper Bob Melvin his 1,000th career victory as an MLB manager. Over half of those wins have come with the A’s.

Melvin began his managerial career with the Mariners in 2003. After two years in Seattle he moved on to Arizona, where he stayed for five seasons. His highlight there came in 2007, when he led the Diamondbacks to the NLCS and won Manager of the Year honors.

The Bay Area native arrived in Oakland in 2011, replacing Bob Geren at the helm. In his first full year in 2012, he took a ragtag roster of rookies and castoffs on a thrilling ride to a division title, earning him another MOTY award and making him one of just 15 multiple-time winners. That began a string of three straight trips to the postseason, topping out at a career-high 96 wins in 2013. He holds a playoff record of 7-11.

Melvin is the 64th manager to win 1,000 career games, joining eight other active skippers (Bochy, Baker, Scioscia, Showalter, Francona, Hurdle, Yost, Maddon). He’s tied all-time with Charlie Manuel and eight shy of Chuck Dressen in 62nd place, with a chance at reaching Jim Fregosi this year in 61st (1,028). A pair of Giants hold the active lead, between Bruce Bochy (1,829) and Dusty Baker (1.827), but the nigh-unbreakable all-time mark is held by Connie Mack’s half-century with the A’s (3,731). In terms of franchise history, Melvin’s 507 wins rank behind Mack, Tony La Russa (798), and Art Howe (600).

The milestone achievement came in style, too. The last-place A’s, mired in a frustrating five-game losing streak, trailed for most of the evening before mounting a 9th-inning comeback. Rajai Davis capped it off with a walk-off home run, followed by coincidentally scheduled post-game fireworks. Click here for the full recap.

Melvin got some congrats from fellow area coaches.