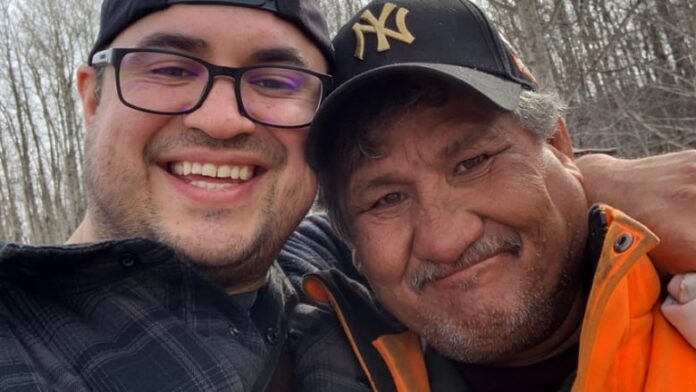 An Alberta man was sentenced on Friday to life in prison without parole eligibility for 13 years in the second-degree murder of Métis hunter Maurice Cardinal.

Anthony Bilodeau was also sentenced to eight years for the manslaughter death of Jacob Sansom. The sentences will be served concurrently.

While noting that Anthony’s prospect of rehabilitation is high, Macklin said the sentence needed to reflect the tragic consequences of the crime.

The small Edmonton courtroom was packed with family and supporters of both the two victims and the convicted killer, and a group of supporters of Sansom, 39, and Cardinal, 57, waited outside the courthouse as well.

The victims’ supporters held each other and wept when the sentence was read out. Though the family has been outspoken throughout the court case, they said they need time to process before commenting on the sentence.

“All the days since that day have been really tough for this family and this community and no amount of justice will ever ease their pain or bring the boys back,” said Andrea Sandmaier, president for Region 2 of the Métis Nation of Alberta, speaking outside the courthouse.

Anthony’s father Roger Bilodeau was sentenced last year to 10 years for his own manslaughter convictions in the two men’s March 2020 shooting deaths.

The father and son were found guilty last May in the deaths of Sansom and Cardinal, who were shot and killed on a rural Alberta road after a brief pursuit.

During the trial, the jury heard that while Roger was the initial pursuer of the two hunters, his son who he called to help was the one who shot both victims.

The Crown had previously told the court the killings were a case of the Bilodeaus taking the law into their own hands and Sansom and Cardinal had done nothing wrong.

Court previously heard that Sansom and Cardinal had spent March 27, 2020, moose hunting, then socializing with friends.

A second-degree murder conviction comes with an automatic life sentence. Prosecutor Jordan Kerr argued that Anthony should not be eligible to apply for parole for 15 years.

For the manslaughter conviction, Kerr urged the judge to dole out a 12- to 15-year sentence, describing the offence as “near murder” given that Anthony shot Sansom in the chest with a high-powered rifle shortly after arriving on the scene.

Kerr pointed to a number of aggravating factors, including that Anthony shot Cardinal multiple times, that he disposed of the gun he used to shoot the men, that he left the victims lying on the road after shooting them rather than seeking help, and that he and his father were taking the law into their own hands.

Kerr said Anthony’s actions betrayed a “callous disregard for the life and well-being of the deceased.”

The trial heard that on March 27, 2020, when Roger saw truck lights in his yard on a rural property outside of the village of Glendon in northern Alberta, he and his 16-year-old son jumped into his truck to give chase. He told court he thought the occupants of the trucks could be thieves.

The father called his adult son Anthony during the pursuit and told him to bring a gun.

Seconds after he arrived on the scene, Anthony shot Sansom in the chest. Then he shot Cardinal three times in the back.

Defence lawyer Brian Beresh argued that the Crown’s proposal was too severe, given evidence of his client’s good character and his prospect of rehabilitation.

He argued the parole ineligibility period should be set at 10 years, and that Anthony should get four years for the manslaughter conviction, to be served concurrently.

Beresh argued his client didn’t act out of malice, but rather out of loyalty to his father who called him for help.

Speaking to media after the sentence was delivered, Beresh said his client plans to appeal. He said Anthony has faith in the justice system.

“It’s fair to say he’s disappointed but he has been very calm throughout this process,” Beresh said.

Roger, who was sentenced in August, received credit for 4½ years time already served.

When sentencing the older Bilodeau, the judge described the crime as a killing of two innocent men.