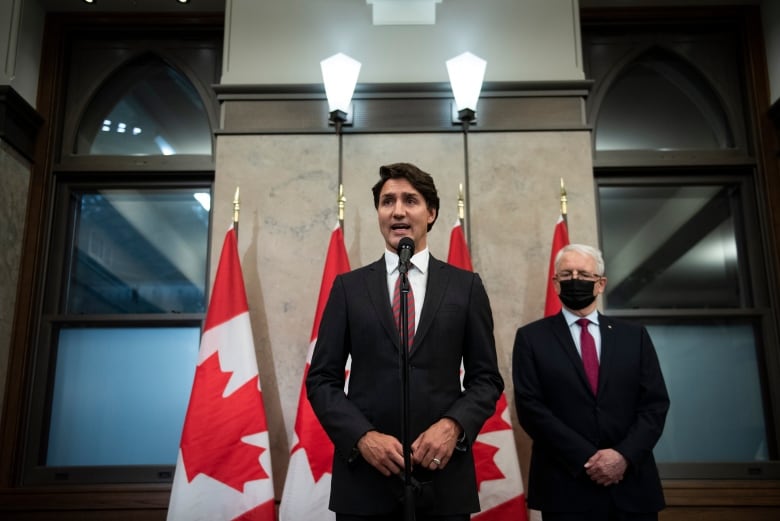 Shortly after his late Friday announcement that Kovrig and Spavor had been set free by Chinese authorities, Prime Minister Justin Trudeau and Foreign Affairs Minister Marc Garneau boarded an overnight flight on a government jet to greet the two returning men on the Calgary airport tarmac.

A government official with direct knowledge of the situation said the delegation was “very inspired by the resilience” of the two Michaels and the “really remarkable” happy ending to a situation that looked grim only days ago.

The two men were in good spirits, at times even joking, as Trudeau and Garneau welcomed them and Canada’s ambassador to China, Dominic Barton, back home after the gruelling ordeal, the source said. After cups of coffee and other light refreshments in an airport hangar, Spavor stayed on in Calgary while Kovrig boarded another flight destined for Toronto to reunite with his family.

The timing of Kovrig and Spavor’s release belies Beijing’s claim that their 2018 arrests were somehow unrelated to the Meng affair, experts said. The co-ordinated release makes it plain that the two men, once accused of espionage by Beijing, were detained as retribution for Meng’s arrest on U.S. fraud charges.

Speaking to reporters Friday, Trudeau dodged questions about how the case, and the release, has affected Canada’s relationship with China, saying “there is going to be time for reflection and analysis in the coming days and weeks.”

‘This is really a slap in the face of Beijing’

But China watchers say this incident has irreparably damaged Canada’s relations with the Asian superpower — souring bilateral ties that looked to be on the up and up only four years ago when Trudeau tried to pursue some sort of trade agreement with the regime.

“This is really a slap in the face of Beijing. They have refused to admit this is hostage diplomacy, but it is now totally undeniable the two Michaels were unjustly detained because of the arrest of Meng,” said Lynette Ong, an associate professor of political science at the University of Toronto’s Munk School of Global Affairs, and an expert on China and authoritarian politics.

“I don’t think Canada-China relations can actually be repaired. We are living in an entirely different world now,” Ong said.

While the country celebrates the end of this 1,020-day nightmare and the safe passage of Kovrig and Spavor, talk in official circles now turns to how Canada will grapple with an increasingly hostile China — a country that had no qualms about imprisoning innocents to protest against the actions of a foreign power.

Throughout this Meng dispute, Ong said, Canada has been on the sidelines as other Western partners like Australia, the United Kingdom and the U.S. strengthen their multilateral relationship through a new security pact called AUKUS to challenge China’s hegemony in the Asia-Pacific region.

Leaders from the “Quad” group of countries — Australia, India, Japan and the U.S. — also met Friday to continue talks about how best to counter China’s growing influence in a region that is hugely significant to global security and prosperity.

“Canada is seen as a bit of an outlier among Western democracies. We’ve been very reticent, very reluctant to take a firm position one way or another. My guess is the Liberal government has been waiting for the outcome of the two Michaels. Since this case is now settled, we have to make our China policies loud and clear,” Ong said in an interview.

“China is a rising global power. We just can’t afford to be caught in such a situation like this again, to be passive, with no strategy,” she said. “China may have underestimated the cost of detaining the two Michaels. I think the ramifications will be very long-lasting.”

In an interview with CBC Radio’s The House, Guy St-Jacques, Canada’s former ambassador to China, said Ottawa’s first priority must be strengthening the Canada-brokered Declaration Against Arbitrary Detention in State-to-State Relations. That agreement, signed by 57 other countries in February, was drawn up to send a message to China and other belligerent countries, such as Russia, Iran and North Korea, that the democratic West won’t tolerate this form of “diplomacy” and dispute resolution.

Now that the two Michaels are home, St-Jacques said, Canada and its allies must impose stiff penalties on those who dare defy international norms in the future.

“We must agree among ourselves on sanctions that we could apply against China if they ever use this hostage diplomacy again,” St-Jacques said. “It’s about sending a very powerful message that this kind of bullying can’t carry on. We have to put teeth to it.”

“We’ve got to ensure China does not practice hostage-taking again, because, to a certain extent, they’ll say it worked,” added Colin Robertson, a former Canadian diplomat. “Meng is coming home as a result of their doing this. There will be those in China who say, ‘It works, we’ve gotta do it again.’ We’ve now got to agree there will be sanctions.”

But Robertson said pushing sanctions for would-be hostage-takers shouldn’t mean an end to the diplomatic relationship with China.

“We have to engage with China — it’s the rising power. We don’t agree with them on human rights and surveillance, but we still want to trade with them,” he said. “We have to work with them. Otherwise the world will get very difficult.”

Jérôme Beaugrand-Champagne, a lawyer and lecturer on Chinese law at McGill University’s Faculty of Law, said that, for too long, Canada has put its economic interests ahead of other considerations — preferring to maintain financial ties with the world’s most populous country rather than denounce it for wrongdoing.

“Unfortunately, the federal government doesn’t have a China policy. They’ve been pressured to do so, but they’d rather continue on with their trade missions to China,” he said in an interview.

“We’ve seen them trying to purchase vaccines from a Chinese company. It’s time to set aside only a trade policy with China and take into account other interests of ours,” he said, referring to possible Chinese interference alleged to have occurred in the recent federal election and the mysterious Winnipeg microbiology lab debacle as justification for a more aggressive posture vis-a-vis China.

Parliament has already signalled it is ready to go further than Trudeau and his cabinet in condemning China not only for its aggressive statecraft but also for its continuing abuse of Uyghur Muslims in Xinjiang province and its crackdown on democratic rights in Hong Kong.

Earlier this year, the vast majority of MPs voted in favour of a Conservative motion calling China’s actions against Uyghurs and other Turkic Muslims a “genocide.”

A similar motion failed in the Senate after B.C. Sen. Yuen Pau Woo, the leader of the Independent Senators Group (ISG), the largest caucus in the upper house, spoke out against criticizing the Asian country in harsh terms, saying it would be “gratuitous” and “simply an exercise in labelling.”

In a Friday tweet, Woo said it was a happy day for “#MichaelKovrig #MichaelSpavor #mengwanzhou and their families,” which prompted backlash from some who saw the social media post as equating what the two Canadian men endured in Chinese prison to Meng’s house arrest at her multimillion-dollar Vancouver mansion.

Conservative Sen. Leo Housakos, who has been one of Canada’s leading voices calling for a more hardline approach to China, said Saturday that the Spavor and Kovrig hostage-taking demands a forceful response from Ottawa.

“Now that the two Michaels are home and the Chinese communist regime’s thuggery has been fully exposed for what it is — what we’ve known it is all along — Canada can no longer continue to deal with this regime as honest brokers,” Housakos said in a statement to CBC News.

“We must act quickly and decisively to send a message that what happened here will not be tolerated again,” he said. “We must stand up to out-of-control tyrants who so blatantly and proudly flout the international rule of law.”

To start, Housakos said, Trudeau must “immediately announce they are banning Huawei from our 5G network” and commit to a boycott of the 2022 Winter Olympic Games in Beijing. He said Canada must start to wean itself off “cheap goods” made in China and instead pursue trade links with countries that are more ideologically aligned.

While Canada’s largest wireless carriers have already ducked doing business with Huawei, there hasn’t been a formal decree from Ottawa barring the Chinese telecommunications giant from building out the country’s critical infrastructure. As for an Olympic boycott, Garneau has said it’s a decision best left to the Canadian Olympic Committee.

“China is a very real and increasing threat,” Housakos said. “Canada must start treating it as such.”