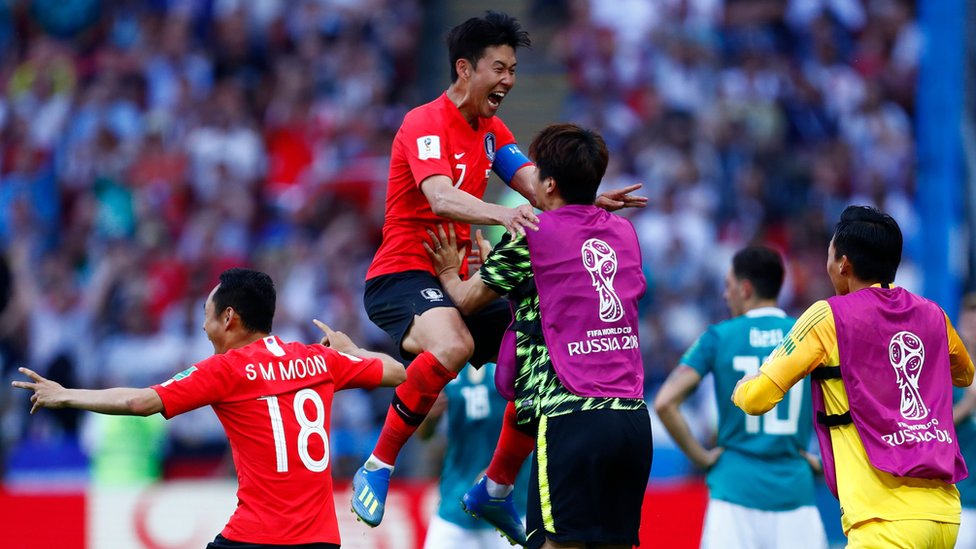 Two hosts on US Spanish-language network Telemundo have been suspended after making racist gestures while celebrating South Korea’s win over Germany.

The win meant that Mexico was cleared to advance in the tournament.

During a celebratory dance on set, the two presenters were seen pulling their eyes to look slanted.

The same gesture was posted by several Mexican fans on Twitter in an attempt to thank South Korea.

Social media users condemned the instances as racist and many Mexicans have since apologised.

South Korea’s win over Germany at the Fifa World Cup meant Mexico edged into second place in their group, hence will advance into the knock-out stages.

South Korea, despite its win, failed to progress to the next stage, but its fans united with Mexican supporters around the globe to celebrate.

In Mexico City, hundreds of fans rushed to the South Korean embassy to party with the staff and consul general.

Some of South Korea’s enthusiasm, however, turned bitter as Mexican fans “thanked” Koreans by posting pictures of themselves pulling their eyes to the side, which is considered a racist gesture.

One user wrote “They say they love us and that we are their brothers then what’s this… I heard they know that this is a racist gesture…”.

Another tweeted that South Koreans “don’t need brothers who are racists”.

Some were slightly more lenient in their reaction, arguing that while the gesture was wrong, Mexican fans might not have meant to offend.

“They did it because they didn’t know it was being racist. You can smile and tell them the meaning. You don’t need to be angry at things if they are done without bad intention,” one person wrote (in Korean).

Many Mexicans who posted a slanted-eye picture removed them in response to the criticism.

‘A mix of frustration and anger’

The slanted eye gesture is nothing new to Koreans. The Telemundo incident is the latest in the series. While the broadcaster was quick to react, the overall sentiment is a mix of frustration and anger at this repetitive trend and helplessness for not being able to stop it.

Will the continued cycle of these racist gestures followed by local outcry help educate people on what is a racist gesture and what is not?

It seems that some Mexicans and people in the wider Latin American region have apologised and admitted it was wrong. At the same time, the incident has also led some Koreans to look back at their own words and actions.

One Twitter user wrote: “Saying the gesture was racist is okay. But if you go beyond that and start saying [to Mexicans that] ‘you are even looked down by the US’ then you yourself become a racist.”

Telemundo, which is part of NBC, put out a statement saying it was “extremely disappointed” in the two presenters, James Tahhan and Janice Bencosme.

“Our company takes this type of inappropriate behaviour very seriously as it is contrary to our values and standards,” it said.

The channel said both presenters had been placed on “an indefinite suspension”.

James Tahhan also apologised on Twitter, saying he had “made an inappropriate and insensitive gesture towards the Asian community”.

He said he “wanted to apologise to anyone who was offended by it”.

The Miami-based channel broadcasts in Spanish to the US Hispanic population, including the large Mexican community.

Many Twitter users pointed out that a network which is itself aimed at a minority subject to racism in the US should be more sensitive to other minorities.

While some users argued the gesture might not have been made with ill intent, others insisted it was well known in Latin America as an offensive gesture.

Mexican fans at the World Cup in Russia had previously caused controversy with homophobic chants in their earlier group stage matches.

Although the incident was not caught on camera, the soccer star later apologised on Facebook, arguing he merely had been happy to see “an Asian boy wearing an Argentina T-shirt”.