Mayweather-McGregor: Expect a spectacle, not a fight 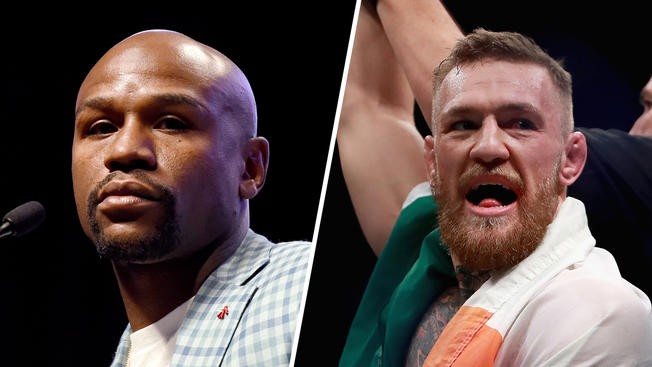 You wouldn’t buy a ticket to the circus expecting to see Shakespeare, would you? And I bet you wouldn’t hit McDonald’s expecting the finest filet mignon either.

So if you are inclined to part with around $100 to watch the Showtime PPV card on Aug. 26 headlined by all-time great Floyd Mayweather coming out of a nearly two-year retirement to beat up UFC superstar Conor McGregor — who has never had a pro or amateur boxing match — by all means, do so. But, please, manage your expectations the way you would at the circus or Mickey D’s.

If you are interested in the fight, cool. Enjoy. Have a party. Have a blast. Dream about the million-to-1 chance of McGregor pulling the biggest upset in the history of sports — by far — or, more likely, Mayweather embarrassing McGregor in a one-sided exhibition.

I certainly don’t expect much of a serious fight, but given how great Mayweather and McGregor are at trash talking, and having seen some of their outlandish pre-fight antics, we all expect a fun promotion, at least right up until the first bell. But I get it. The whole thing is interesting, the way it’s interesting to peer out the car window when there’s a wreck on the side of the road. We all stop and look.

And millions will pay up and stop and look on Aug. 26 as we line Mayweather and McGregor’s pockets with millions. They could both walk away with nine-figure paydays when it’s all counted, and good for them, especially for Mayweather, who will make the easiest money of his career in what probably will be his final fight (for real, this time) as he moves to 50-0. That’s a pretty sweet mark to walk away on (no matter how hollow No. 50 is going to be).

I admit that I never thought the fight would happen. There were too many roadblocks, I thought. But roadblocks, as I should have realized, have a tendency to be cleared when there is an enormous pile of money on the other side of said roadblock.

In recent months I did come around and believe this freak show was going to go down. Now I’m actually looking forward to it because I like to cover big events, and there is no doubt this is a big event, even if the fight itself is destined to be bad. But my expectations for the actual fight are so low that no matter how it goes, I won’t be disappointed.

The Floyd Mayweather-Conor McGregor showdown is going to be a huge event in Las Vegas. ESPN Illustration

I have had people suggest that I should advocate for a boycott of the event, to which I say, are you crazy? I’m not boycotting. I’m packing my bags for Las Vegas so I can witness the blessed event in person at T-Mobile Arena.

(As an aside, I don’t think the Nevada State Athletic Commission, which preaches about its central job being to protect the health and safety of the fighters, should sanction the fight because we’re talking about the greatest fighter of his time and one of the best ever in Mayweather fighting a guy who has never had a boxing match of any kind. If this was Mayweather versus pro debuting Johnny Williams, it would never be sanctioned in a billion years. But, of course, the commissioners, who are political appointees, report to the Nevada governor, and his job is to protect the economic interests of his state, and the fight will have a gazillion dollar impact on Las Vegas, but I digress.)

Floyd Mayweather, right, is one of the best defensive fighters in boxing history. Will Conor McGregor be able to land his punches. AP Photo/Eric Jamison

Hey, as long as the commission is going to sanction the most epic big-fight mismatch of all time, I will happily watch and, if you are reading this, you probably will, too.

In the end, the freak show won’t have any long-term impact on boxing or MMA, no matter who wins or how bad or good the fight it is. It will be here today, gone tomorrow. It will be like a storm roaring though town and then things are silent moments later. By the end of August, Mayweather-McGregor will all but be forgotten and relegated to a footnote in boxing history.

But as you prepare to part with your hard-earned cash to watch the pure money grab, think back to Mayweather-Manny Pacquiao, the 2015 mega fight the world had waited five years for.

Floyd Mayweather vs. Manny Pacquiao took more than five years to get made and when it happened, it didn’t live up to the high expectations. Al Bello/Getty Images

That fight matched the two best fighters in boxing pound-for-pound, it was to unify welterweight world titles, and it was to crown the No. 1 boxer of the era. On top of that, they had contrasting fighting styles and we all expected at least a good fight.

There were huge stakes and huge expectations, and we had every right to have those expectations. And then the fight stunk out loud, and millions were upset and disappointed.

Now fast forward to Mayweather-McGregor. Remember what I said about expectations? I am telling you well ahead of time to temper your expectations. Unlike MayPac, you have no right to expect a great fight between Mayweather and McGregor. None.

So, by all means, part with your $100 or so (or much more for a ticket), but when the fight fails to come close to living up to the hype and makes Mayweather-Pacquiao look like Ali-Frazier, you will have only yourself to blame. It won’t be on the fighters; it will be on you for believing you are going to get your money’s worth.

When the fight turns out to be a Mayweather whitewash of the highest order — I literally think Mayweather could go a whole round without getting hit with a single punch if he wants — don’t go on my Twitter feed and complain. You will get zero sympathy from me.

You will have gotten what you deserve for having had silly expectations for a fight I believe shouldn’t even be sanctioned.

And when the fight fails to live up to the hype, don’t blame Floyd or Conor or the rest of the business people behind this event — Mayweather adviser Al Haymon, Mayweather Promotions CEO Leonard Ellerbe, UFC president Dana White and Showtime Sports bossman Stephen Espinoza — either. Don’t blame a single one of them.

Blame only yourself. Buyer beware.