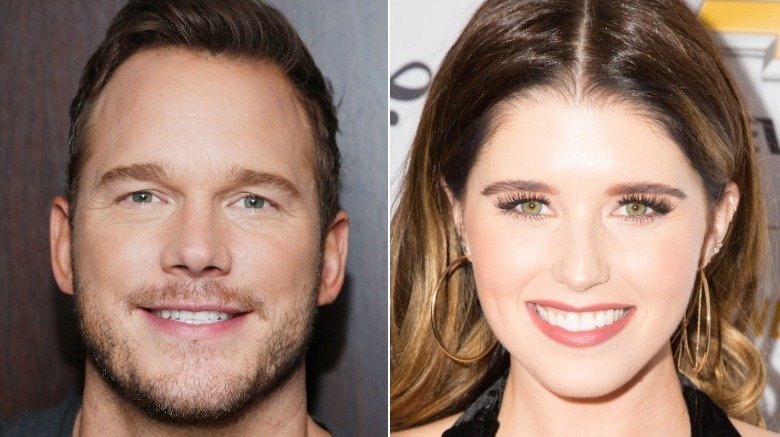 As a source told the publication, “[They] went from casually dating to spending much more time together. Chris and Katherine have introduced one another to their family and friends, and have been almost inseparable when they are free.”

According to an Entertainment Tonight exclusive, published on Tuesday, July 31, 2018, the alleged relationship between the Guardians of the Galaxy star and the eldest daughter of Arnold Schwarzenegger and Maria Shriver has quickly “gotten serious.”

Pratt and Schwarzenegger first showed signs that things were heating up between them just last weekend. On Sunday, July 29, the suspected couple were spotted kissing during an afternoon outing with the Parks and Recreation alum’s 5-year-old son Jack, whom he shares with ex-wife and Mom star Anna Faris. According to TMZ, the cute pair had locked lips while the trio grabbed some ice cream after attending a church service together in Los Angeles.

According to the Daily Mail, the two were spotted again just a few days following their highly-publicized PDA. On Wednesday, August 1, they stopped by the Little Beach House Malibu — again with Jack in tow.

Having Schwarzenegger “[spend] quality time” with his only child was, according to ET‘s latest insider, “A big step for Chris.” As the source explained, “Until he knew it was more than just casual, he wasn’t introducing Jack to anyone. Chris and Katherine are very happy together.”

Pratt, 39, and Schwarzenegger, 28, first sparked dating rumors in mid-June 2018, when they were seen picnicking together in Santa Barbara, Calif. According to a source cited by People magazine, Schwarzenegger’s mother, Maria Shriver, had reportedly played matchmaker. At the time, the insider claimed that the two had already been on “multiple dates.”

Amid continued speculation of their new relationship in early July, another source told ET that the alleged pairing had “hit it off” earlier this summer, but were taking things slow. “The two really enjoy their time together, but it’s still in the early stages,” the insider continued, noting, “[Chris is] in no rush for a relationship.”

As Nicki Swift previously reported, Pratt and Faris, 41, shocked fans when they announced their separation in August 2017. The former couple, who married in 2009, shared a joint statement on social media at the time to reveal the news. “Anna and I are sad to announce we are legally separating,” they wrote. “We tried hard for a long time, and we’re really disappointed. Our son has two parents who love him very much and for his sake we want to keep this situation as private as possible moving forward.”

Their statement continued, “We still have love for each other, will always cherish our time together and continue to have the deepest respect for one another.”

The amicable exes filed for divorce that December, and have since remained focused on successfully co-parenting their only child. While citing irreconcilable differences, both sought joint custody of their son.

After months of silence on the matter, Pratt first opened up about the surprising split in April 2018. “Divorce sucks,” he told Entertainment Weekly. “But at the end of the day, we’ve got a great kid who’s got two parents who love him very much. And we’re finding a way to navigate this while still remaining friends and still being kind to one another.” The movie star added, “It’s not ideal, but yeah, I think both of us are actually probably doing better.”

As always, he and Faris seemed to be on the same page. The actress later said she “completely” agreed with Pratt’s blunt assessment during an interview with Michael Yo on SiriusXM Hits 1. Luckily, their breakup has remained drama-free. “We have a great relationship, we really do and we always have,” she said. “It’s always tough to envision your futures as one thing, but I think there’s a lot of love.”

While it’s worth noting that Schwarzenegger is reportedly Pratt’s first girlfriend following his divorce, both she and the Jurassic World: Fallen Kingdom star have — at the time of this writing — remained mum on their suspected romance. For her part, Faris has also moved on. Since October 2017, she’s been romantically linked with cinematographer Michael Barrett. They reportedly met while working on the film Overboard.