Marco Silva and Watford an odd pairing of ambition and instability 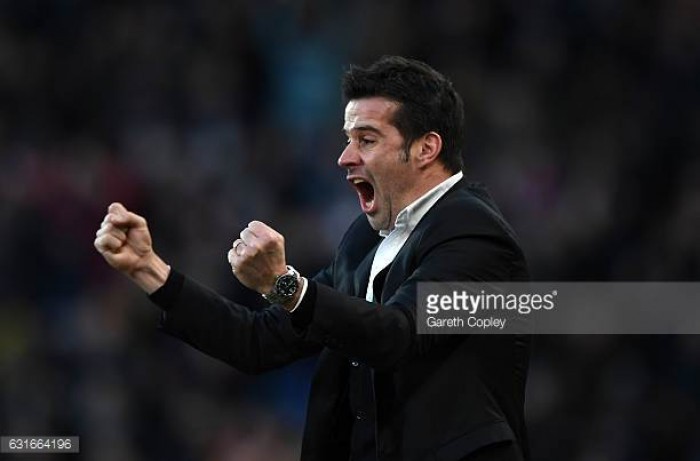 Marco Silva says he and the Watford board have a clear understanding of what their targets are in the transfer market.

When Marco Silva arrived at Hull City last season, they were bottom of the Premier League. They’d won one of their previous 18 games, had a disaffected fan base and an overburdened squad who started the season featuring just 13 fit senior players. Oh, and two of the best in that group, Jake Livermore and Robert Snodgrass, were promptly sold.

Hull ultimately went down, but the very fact they had a chance of staying up proved what an exceptional job Silva did. And why, after leaving at the end of the season, he had a buffet of clubs lined up and ready for him to choose from. In the end he picked Watford, a club who have breezily got through six managers in the last three years, and in the five years since the Pozzo family took over the club, managers have lasted an average of 223 days.

It’s tough to argue that Watford’s policy doesn’t work. Since 2012, they’ve won promotion from the Championship and established themselves as a Premier League team, as well as reaching the FA Cup semifinal in 2016. They’re an illogical club, a team surviving and even flourishing by going against accepted wisdom, by doing everything you’re not supposed to do. Stability is laughed at, continuity regarded as a needless frippery, low-level chaos welcomed. If nothing else, it makes them one of the most fascinating clubs in the Premier League.

But one does wonder why Silva, a man with a strong reputation in England and a couple of trophies in Portugal and Greece under his belt, chose Watford. Does he see himself as the man to finally stick around for longer than a year, like the optimistic soul who marries a hellraiser and serial cheater because they think they can change them? Or is this a more calculated career move, another step on the ladder to something more glamourous?

When asked about his choice this week, Silva said the usual, politically sensible things: the club has ambition, wants to improve, to stay in the Premier League and do better than last season, etc and so on. But of course, he’s aware that the last two managers at Vicarage Road have achieved entirely acceptable results and were still shown the door.

“I understand the question,” he said when asked if the brief reigns of his predecessors were a concern. “But if you start to think in terms of years in the contract, maybe that’s the first mistake. It’s not important to me to think about [the managerial turnover], I don’t pass my days thinking about it. What is important to me is what I did this morning with my players, what I will do tomorrow with them to prepare for the next match. I signed for two years. I believe it is a project for two years.”

Tackling some of the issues that his predecessors faced is one way to avoid the sack. Walter Mazzarri was criticised for his problems with communication, not just that he wouldn’t speak English to the media, but that his instructions on the training pitch had to be conveyed through players who spoke his native Italian, leading to confused messages. And Quique Sanchez Flores was dismissed because of an alarming drop in form, a disappearance of intensity in the second half of his season in charge that dramatic led to a slide down the table.

That Silva has spoken virtually flawless English since his arrival in the country dispels the first issue, and he referred to his spell with Hull as a counterpoint to the second. “In that five months, we played every match like a final,” he said. “The club had big problems: we changed many, many things club and we fought until the end. It’s easy for everybody to see what we achieved there. We got the team to play and everyone to believe.” 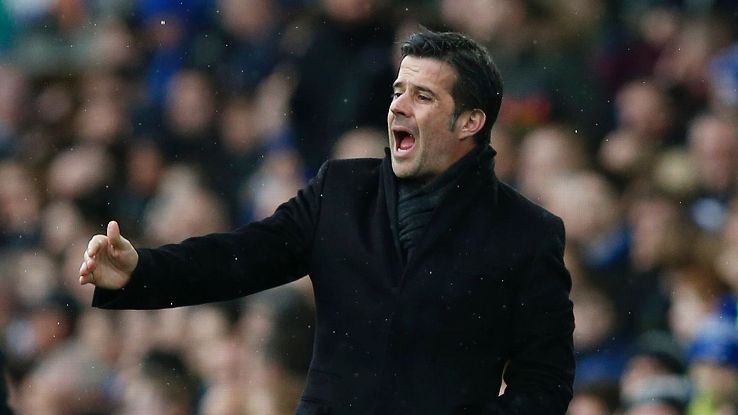 Marco Silva nearly rescued a doomed Hull side last season and should have more talent to work with this season at Watford.

When speaking to the media, Silva has the air of a man who would rather be doing something else, and it’s important to make clear that’s a compliment, not a complaint. He did gamely field the inevitable question of whether he had spoken to Elton John, confirming that the Watford life president had called. “He said ‘good luck, you are a fantastic manager.’ Maybe he told every manager that!” But he would clearly prefer to be on the training pitch, or talking to his players, or doing one of the many other more important parts of his job. Many managers regard this element of their job as something of a chore, but perhaps it’s partly because he also doesn’t seem enormously concerned with what people think of him.

“I don’t care whether I was underestimated or not,” he says, when asked about his initial reception at Hull, when he was derided in some quarters as a foreign unknown taking a job an Englishman could have done. “I respect everybody’s opinion, but my focus is on my job and what is most important is the opinion of the people who work with me: the players, my board, the supporters.”

Clearly, Silva could do a brilliant job at Watford: going on his results with Hull, a top-half finish doesn’t feel excessively optimistic. But we come back to the question of why he chose them. One theory is that, having left Hull, he wasn’t excessively impressed with the jobs on offer: his widely-accepted choices were Watford, Southampton and Crystal Palace. Not a huge amount of difference in those three, so perhaps he decided that a year at Watford would be the best way to attract a slightly bigger fish next summer. Six months in the Premier League probably isn’t enough to convince a heavy hitter to trust him: 18 might be. Is Watford a shop window?

Who knows: perhaps he really does believe that his long-term future is at Vicarage Road, that he can persuade the club hierarchy to stick with one man for longer than a metaphorical heartbeat. What is more immediately relevant is whether he can translate the good work done with Hull to another club. Once again, Watford might be one of the most interesting clubs to watch in the coming season.

Nick Miller is a writer for ESPN FC, covering Premier League and European football. Follow him on Twitter @NickMiller79.