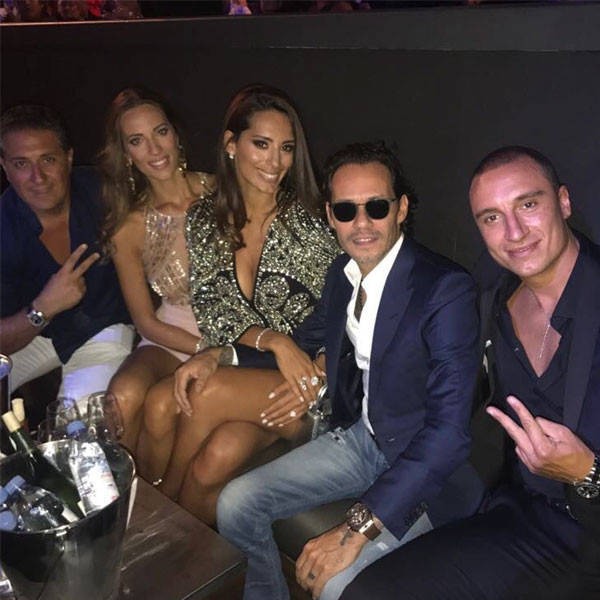 Marc Anthony kicked off his birthday festivities with a familiar face.

While the Latin crooner was in town for his Full Circle tour at the Mandalay Bay, Anthony stopped by at Planet Hollywood to catch his famous ex-wife’s Las Vegas show.

“Starting the Pre-birthday celebration @jlo,” the Grammy winner wrote on Instagram along with a snap of him alongside his girlfriend Raffaella Modugno and a group of friends. Anthony, who was married to Lopez for seven years, rang in his 49th birthday on Saturday.

Meanwhile, Lopez’s new love, Alex Rodriguez, wasn’t too far away. The baseball star applauded his leading lady from the audience Saturday night next to his 12-year-old daughter, Natasha Rodriguez.

The father-daughter duo even adorably mimicked the triple threat’s dance moves and documented the moment in a video Lopez shared on Sunday morning.

“This made my night Tashi and Daddy coming thru with the #ography #waitingfortonight,” she captioned the clip.

As for her ex, the two reunited backstage with Anthony’s group and there was no shortage of smiles.

The former husband and wife, who share 9-year-old twins Max and Emme, have maintained a friendly relationship since their separation in 2011 and continue to work together in their shared industry.

“You know, Marc and I are good how we are right now,” Lopez told the co-hosts of The View in March. “There is a reason we’re not together, but we’re great friends. We’re parents together and we’re even working on a Spanish-language album together. That has been even better for us because actually, we met working. That’s where we really are magical, when we’re on stage together and stuff like that. That’s where we’re good and so we leave it there.”

As for the new man in her life, she recently told HOLA! USA what they share is “really pure, true love.”

“I’m in a good relationship,” Lopez told the magazine. “I feel like I can say that for the first time—I don’t know—maybe ever. And not that I didn’t have great relationships, full of love and adventure, but this is the first relationship I’ve been where I feel like we really make each other better.”