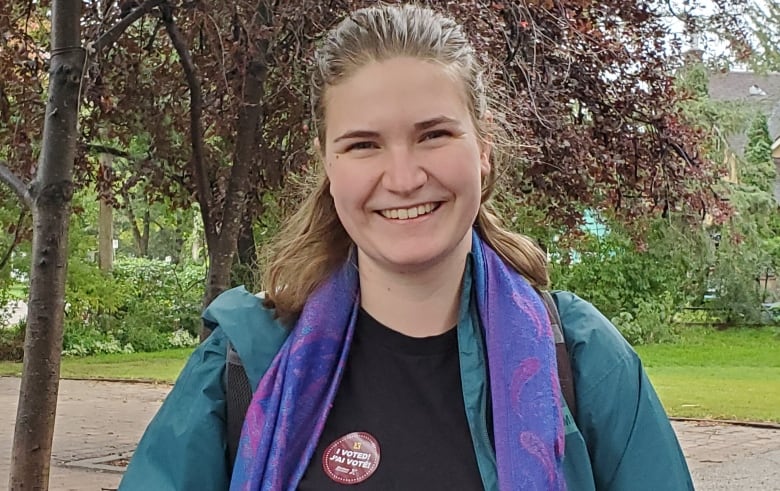 Manitobans are heading to the polls today in an election that has the incumbent Progressive Conservatives seeking a second majority government.

Polls opened at 8 a.m. CT in the province’s 42nd general election. Eligible voters have until 8 p.m. to vote.

Live coverage begins at 7:30 p.m. online, and on CBC Radio One 89.3 FM and CBC Television in Manitoba.

More than 113,000 Manitobans have already cast ballots in advance polls, according to Elections Manitoba, compared to about 110,000 in 2016.

Kate Moulden, 19, cast a ballot on Tuesday in her first ever provincial election.

I’m so excited. We’re lucky to be able to do this.– Kate Moulden, voter

“I’m so excited. We’re lucky to be able to do this,” she said outside the voting station at the Robert A. Steen Community Centre in Winnipeg’s Wolseley neighbourhood.

“Thousands and thousands of people everywhere around the world can’t vote. We have the privilege to be able to do that. We’re so lucky to be in a society, in a country, that respects voting.

Moulden said she watched the leaders’ debate, read all of the parties’ platforms and the individual candidates’ literature before making her X on the ballot.

“I just wanted to make sure I was educated enough because there really isn’t any excuse for not voting, unless you actually can’t,” she said, adding that poverty, education and health are her main concerns.

Stuart Krogh was among the first wave of voters to the Wolseley polling station, but he wasn’t particularly happy about it.

It’s an election we weren’t supposed to have for another year.– Stuart Krogh, voter

“It’s an election we weren’t supposed to have for another year,” he said, referring to Progressive Conservative Leader Brian Pallister’s decision to go to the polls before the set date in October 2020.

“In spite of that, it’s still important to vote, even if it’s just to send a message, even if you spoil your vote.”

This was an early election, called three years into the Progressive Conservatives’ term.

Over the 29-day campaign, Pallister made promises to create 40,000 jobs, improve supports for victims of domestic violence and tackle the methamphetamine crisis, as well as bring more tourists to the province and create more flexible grocery store hours.

Green Party Leader James Beddome made promises, including a guaranteed basic income and scrapping the education property tax, as well as developing a province-wide compost program and increasing the carbon tax.

All four leaders faced off once, in an Aug. 28 televised leaders’ debate. You can watch a recap of it here.

You’ll need one piece of government-issued photo ID, or two other pieces, to vote today.

If you don’t have those pieces of ID, you can bring another voter with ID from your riding to vouch for you, as long as that person is registered. You can find more information on how to vote here.

All employees in the province are entitled by law to three consecutive hours to vote, at the discretion of the employer — that is, not any three hours you want.