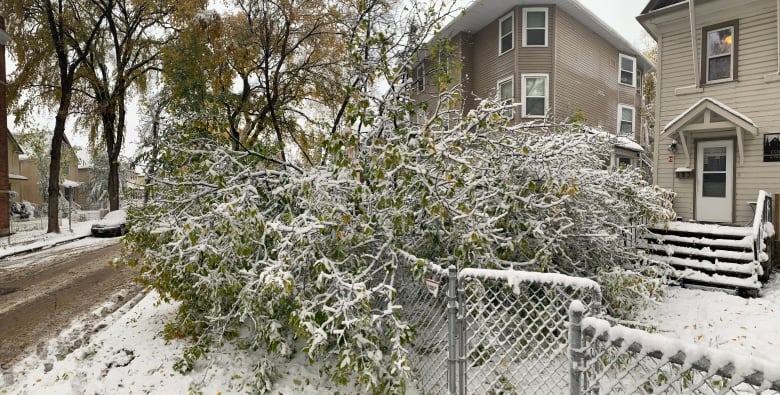 The cleanup continues Saturday morning after a massive October snowstorm walloped the southwestern part of the province over the last two days.

The City of Winnipeg is warning people to avoid all non-essential travel as crews work to fix traffic signals that aren’t working, clear fallen branches and trees and plow streets.

“Right now the number one priority continues to be life safety, so this is of course making sure that our citizens are safe around down power lines,” said Winnipeg Mayor Brian Bowman in a news conference Saturday.

He added all city-run recreation centres and libraries are closed and will re-open again on Sunday. Garbage and yard waste collection was delayed in some cases due to downed trees.

A near miss happened in Crescentwood when a transformer exploded earlier Saturday morning.

Russell Enns woke up to some strange sounds.

“All of a sudden there were sparks. It was like fireworks, to be quite honest with you,” he told CBC News.

“It sounded just like it was New Years Eve or Canada Day celebrations.”

Manitoba Hydro says it’s working around the clock to restore power to homes throughout the province.

Bruce Owen, a spokesperson for Manitoba Hydro, speaking to CBC’s Nadia Kidwai on Weekend Morning on Saturday, said more than 48,000 households province-wide are experiencing power outages as of 7 a.m.

“This storm system has lingered a number of days and it has caused ongoing problems,” he said. “As soon as we fix one thing, boom, two to three things more break because this storm just won’t let up.”

The storm system moved on from Winnipeg overnight, and so did crews. But Owen said utility crews had to be pulled off the roads in the Portage la Prairie and Neepawa areas because of near-blizzard conditions.

He expects the crews to be back up and running as soon as they’re able to drive where they need to go.

On Friday, Manitoba Hydro tweeted it wouldn’t be able to provide estimated times for power restoration. That was still the case on Saturday.

Owen said timing depends on each scenario, including whether there’s damage to a power line, whether a tree is involved, and on weather and road conditions.

“We try to restore the greatest number of people first,” he said. “People in more isolated areas, smaller outages, we will get to them next.”

At the height in Winnipeg, 27,000 households were without power. Owen said that number is now down to about 7,000.

The storm arrived so early this fall that most trees are still loaded with leaves, which are now supporting the snow and causing the branches to bear more weight than normal.

“And they are coming down on our [power] lines,” said Owen, urging the public to be careful.

Matt Vinet, a manager at Green Drop, one of the yard maintenance companies contracted to do the work, called the situation “a tree apocalypse” on Friday.

“I don’t mean to be so alarmist, but it looks pretty grim at this point,” he said. “We’re going to see a lot of damage to a lot of trees.”

The city said in a release Saturday it received nearly 2,000 calls about fallen trees and branches. About 50 crews are working to clear and remove them across the city.

Bowman said crews are doing their best to clean up the city.

A number of highways in the southwest are still closed due to weather conditions.

Dozens of highways and roads throughout southern Manitoba to the U.S. border and the Saskatchewan border are closed to traffic due to poor winter driving conditions.

It’s not known when they will reopen.

Some highways have been closed for over 24 hours.