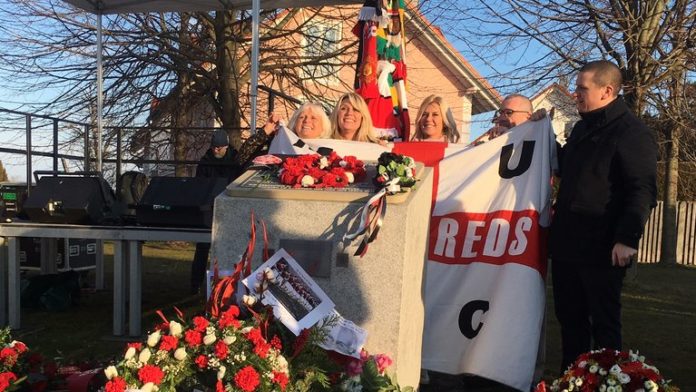 Manchester United fans have paid tribute to victims of the Munich air disaster by unveiling two commemorative plaques on the site where the runway was located.

Fans have made the gesture on the 60th anniversary of the tragedy in which 23 passengers, including eight of the Busby Babes and three club staff, lost their lives.

Supporters made their way to Trudering, a small suburb of Munich where the Munich-Riem airport once stood, to place plaques upon the site of the 1958 disaster.

Some 3,000 turned out to pay their respects, with fans making the journey from as far afield as Australia and America.

A minute’s silence was held at four minutes past three, the time of the crash in February of 1958.

Bayern Munich executive board chairman Karl-Heinz Rummenigge was in attendance as was ex-United defender and club ambassador Denis Irwin.

“It’s amazing turn-out from our supporters, a lot of them make an annual pilgrimage out here. There’s hundreds, absolutely hundreds out here paying respects to the darkest day in the club’s history, I’m truly amazed I really am,” Irwin Said

Matt Busby’s side were making their way back from a European Cup tie against Serbian side Red Star Belgrade when a stop in Munich was required for the aircraft to be refuelled.

As part of the tributes, former player and current coach Nicky Butt led the United U19 team in a wreath-laying service at Partizan Stadium in Belgrade – the venue of the last match played by the Busby Babes.

A ceremony was also held at Old Trafford, where fans gathered outside the tribute to the disaster at the stadium to recite Flowers of Manchester – the poem turned into a song in remembrance of those who died in Munich.