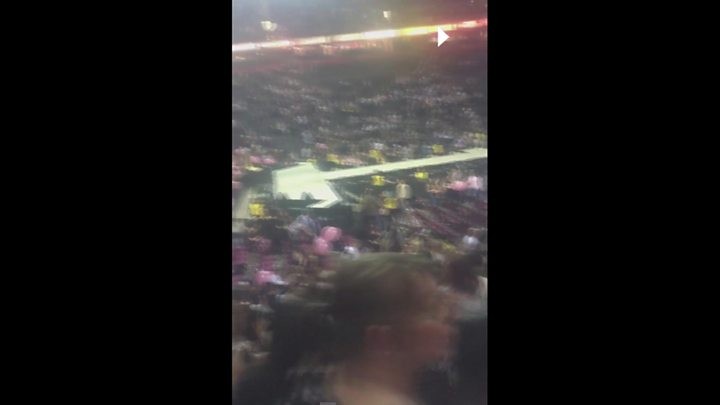 Nineteen people have been killed and more than 50 injured in a suspected terror attack at Manchester Arena.

The blast happened at 22:35 BST on Monday following a pop concert by the US singer Ariana Grande.

PM Theresa May said her thoughts were with those affected by “what is being treated by the police as an appalling terrorist attack”.

Paramedics at the scene told the BBC they had treated some of the wounded for “shrapnel-like injuries”.

North West Ambulance Service said it had taken 59 casualties from the explosion to hospitals and treated a number of walking wounded.

Greater Manchester Police has established an emergency telephone number in response to the attack. It is: 0161 856 9400.

The prime minister has suspended Conservative Party general election campaigning and will chair a meeting of the government’s emergency Cobra committee later, in response to the attack.

Mrs May said: “We are working to establish the full details” of what happened in Manchester.

“All our thoughts are with the victims and the families of those who have been affected,” Mrs May said.

Unconfirmed reports from two unnamed US officials suggested the attack was carried out by a suicide bomber.

Labour leader Jeremy Corbyn tweeted: “Terrible incident in Manchester. My thoughts are with all those affected and our brilliant emergency services.”

Greater Manchester metro mayor Andy Burnham said: “My heart goes out to families who have lost loved ones, my admiration to our brave emergency services. A terrible night for our great city.”

British Transport Police said the explosion was in the arena’s foyer, which connects with Victoria train and tram station, a major hub on the northern edge of the city centre.

Shortly after the blast the station was closed and all trains cancelled.

Greater Manchester Police carried out a precautionary controlled explosion in the Cathedral Garden area of the city at about 01:32. The force confirmed it was not a suspicious item.

The arena explosion occurred shortly after Ariana Grande left the stage at the arena, the city’s largest indoor venue with a concert capacity of around 18,000.

It is believed the blast, which shook the building, centred on the area near the box office where concert merchandise is often sold.

The pop star tweeted: “broken. from the bottom of my heart, i am so so sorry. i don’t have words.”

In the aftermath of the explosion witnesses spoke about the fear and confusion that gripped those caught up in the events.

Andy Holey, who had gone to the arena to pick up his wife and daughter who had been at the concert, said: “An explosion went off and it threw me about 30ft from one set of doors to the other set of doors.

“When I got up I saw bodies lying on the ground. My first thought was to go into the arena to try to find my family.

“I managed to find them eventually and they’re OK.

“It was definitely an explosion and it was some force. It happened near the box office at the entrance to the arena.”

Emma Johnson said she and her husband were at the arena to pick up her children, aged 15 and 17.

“We were stood at the top of the stairs and the glass exploded – it was near to where they were selling the merchandise.

“The whole building shook. There was a blast and then a flash of fire afterwards. There were bodies everywhere.”

The police activity around the arena has been huge. There are blue flashing lights and cordons seemingly on almost every street corner.

A wide area around the venue itself has been completely taped off, and the crime scene appears to be widening, with police pushing people further and further back.

I’ve spoken to people who are shaken, scared and often tearful. One thing that’s apparent is there are many, many young people, some of them with parents or guardians. One mother told me her priority was simply to get her daughters home.

Other people have been more candid and have described seeing people covered in blood, or being treated by paramedics. There’s still a huge sense of confusion and people are constantly searching for information while letting their families know they’re safe.

Within an hour of reports of the incident emerging, people began offering spare rooms and beds to people stranded in the city using the hashtag #RoomForManchester.

Hundreds of tweets offering places to stay have been shared and re-tweeted thousands of times.

Have you been affected by the events at Manchester Arena? If you are OK and able to get in touch please email us haveyoursay@bbc.co.uk