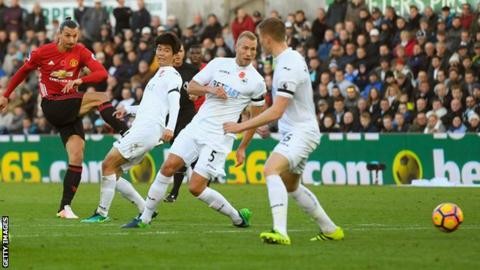 Both teams hit the bar in a frantic start to the match – Jordan Ayew’s scooped cross for the hosts and Phil Jones’ header for United – and it was the visitors who made their dominance pay on the cusp of half-time as Eric Bailly tapped in.

Having initially struggled to unlock their opponents’ well-drilled defence, United then opened the floodgates after 80 minutes as Romelu Lukaku confidently struck his third goal in two games for the club.

Paul Pogba added a third two minutes later with a delicately lifted finish and, shortly afterwards, substitute Anthony Martial fired in low to give United a second 4-0 win from their first two matches of the campaign.

After thrashing West Ham on the opening weekend, it had appeared this would be a sterner examination for United against an organised and defensively diligent Swansea side.

Jose Mourinho’s men seemed frustrated at times – Pogba had to be warned by referee Jon Moss after a quick succession of fouls – but after taking the lead, they seldom looked like squandering it against their spirited but limited opponents.

Mourinho has never failed to win the league title in his second season at a club – including both his spells at Chelsea. A summer of heavy spending had fuelled the belief he could do so again despite finishing last term 24 points adrift of the champions.

With their team unchanged from last Sunday’s drubbing of West Ham, United were quick to take control of this encounter, with Nemanja Matic and Pogba dictating the tempo from the base of midfield.

The visitors enjoyed as much as 66% of possession but initially lacked incision in the final third, which seemed to frustrate their players.

Pogba had to be warned by referee Moss after hauling Martin Olsson to the ground just a few minutes after he was booked for fouling Tom Carroll.

The France midfielder then went on to provide a powerful header which was brilliantly palmed on to the bar by Lukasz Fabianski, only for the ball to drop invitingly for Bailly to convert from close range.

United were happy to sit on that lead until the 81st minute when Henrikh Mkhitaryan found Lukaku unmarked in the box, and the Belgian swept in with his first real opportunity of the game.

Mourinho’s side cut loose from that point, Pogba clipping the ball smartly over Fabianski and Martial finishing off a swift counter-attack to produce a scoreline which arguably flattered the visitors, as impressive as they were.

Swansea switch their attention to cup action, taking on League One MK Dons in the EFL Cup on Tuesday.

Manchester United do not enter that competition just yet – and do not have a midweek fixture. They play Leicester at Old Trafford in the Premier League at 17:30 BST on 26 August.