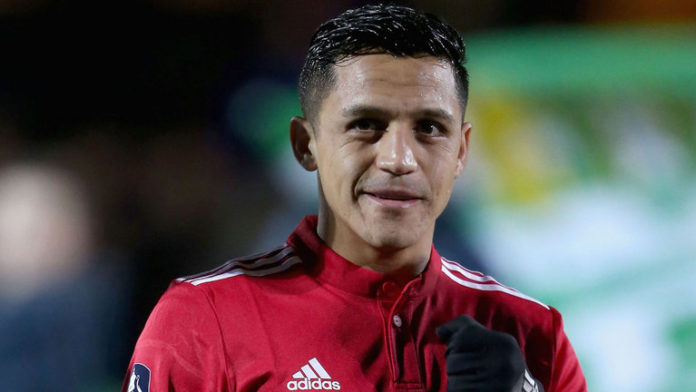 Alexis Sanchez opened his Manchester United goalscoring account on his home debut as they beat Huddersfield 2-0 in the Premier League on Saturday.

Sanchez then grabbed his first United goal in unconventional fashion, seeing a penalty he had originally won saved by Jonas Lossl, only to sweep the rebound into the net (68).

Man of the match: Juan Mata

The result means United claw back two points on leaders Manchester City following their earlier draw at Burnley, and are now 13 points behind in second. Huddersfield, without a win in eight, are down to 19th.

Paul Pogba was named on the bench after an under-par showing in the midweek defeat by Tottenham, and United struggled to break down a stubborn Huddersfield in the first half.

Jesse Lingard and Sanchez stung the hands of Lossl in the Huddersfield goal, but United felt they should have had a penalty when Terence Kongolo’s hefty aerial challenge on Scott McTominay went unpunished.

Sanchez was at the centre of much of United’s play in the second half, seeing an effort denied by a last-ditch Tommy Smith block inside the box, before United got the opener their second-half intensity deserved.

After being played in behind Smith on the left flank, Mata’s first-time cross was swept past Lossl by Lukaku from 10 yards with his left foot.

The goal settled United, and it was 2-0 after 68 minutes as Sanchez was brought down by sub Michael Hefele just inside the box. The Chilean stepped up, saw his spot-kick superbly saved by Lossl, but it fell back into his path to turn home with ease from seven yards.

United saw out the game with ease, with David de Gea not required to make a save for the entire game.

Jose Mourinho: [On Old Trafford atmosphere] “It’s not Portsmouth. I remember Portsmouth – such a small stadium, the atmosphere was absolutely incredible. In here, the atmosphere is a bit quiet and there is not very (much enthusiasm). But the players like to play at home.”

David Wagner: “They have shown character today, and we have difficult games which we have played now, and now have opponents in front of us where we have the chance to take some points. If we show the same commitment we have shown today we will get the opportunities to gain some points.”

Matt Le Tissier: “United were by far the better team. Huddersfield didn’t have a shot on goal as far as I can remember. It wasn’t free-flowing, attractive, zipping the ball around, one-touch football or anything. It was a little bit ground out but they did the job.

“But they’ll need to play better in their next two home games against Chelsea and Liverpool. They’ll have to be a little bit more creative in the final third.”

Man of the match – Juan Mata

The Spaniard pulled the strings in midfield for United, providing four key passes, two more than the entire Huddersfield side.

His cross for Lukaku’s opener was superb, after a first half where United failed to gain any width in the final third Nemanja Matic was a close second in the man-of-the-match running, but Mata’s class told at Old Trafford.