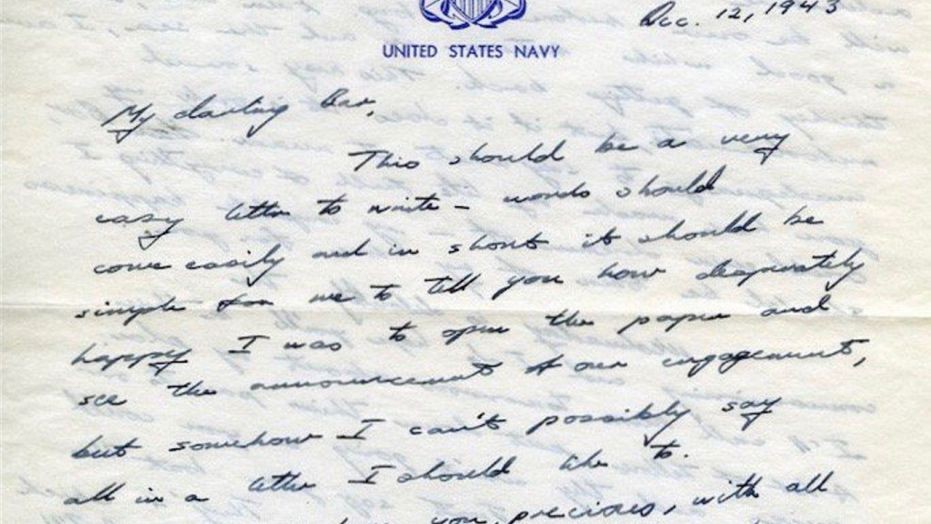 Historians and journalists on Tuesday tweeted out the hand-written love letter that future President George H.W. Bush sent to his then-fiancée Barbara Pierce on Dec. 12, 1943.

Michael Beschloss, a presidential historian, tweeted that Bush was a U.S. Navy pilot at the time during World War II. The letter written in blue ink on Navy stationery and begins: “My darling Bar.”

The future president begins by telling her how happy he was to read their engagement announcement in the newspaper.

“I love you, precious, with all my heart and to know that you love me means my life. How often I have thought about the immeasurable joy that will be ours someday. How lucky our children will be to have a mother like you,” the letter read.

The two met at a Christmas dance. She was 17. He was 18. The future president was a naval aviator in training. “I’m not much at recalling what people wear, but that particular occasion stands out in my memory,” he wrote in his autobiography.

The band was playing Glenn Miller tunes and he asked a friend from Rye, N.Y., if he knew the girl across the room in the green and red holiday dress.

The friend introduced him to Barbara Pierce, a publisher’s daughter from Rye who was going to school in South Carolina. The next song was a waltz.

“Since I didn’t waltz, we sat the dance out. And several more after that, talking and getting to know each other,” Bush wrote. “It was a storybook meeting.”

Barbara Bush, 92, died Tuesday, shortly after her family announced she was in failing health and would decline further medical treatment in favor of “comfort care.” There were no details of her specific health problems.

In a statement, one of her sons, former President George W. Bush, called his mother “a fabulous First Lady and a woman unlike any other.”

The two were married Jan. 6, 1945, four months after the elder Bush was shot down over the Pacific. He’d been the Navy’s youngest aviator when he got his wings and carried the name “Barbara” on his Grumman Avenger torpedo bomber.

The letter, which was kept in the former first lady’s scrapbook, goes on to mention the war and the mission, but the young pilot wrote that he couldn’t wait to return to her.

“This may sound melodramamtic, but if it does it is only my inadequacy to say what I mean. Bar, you have made my life full of everything I could ever dream of — my complete happiness should be a token of my love for you.”