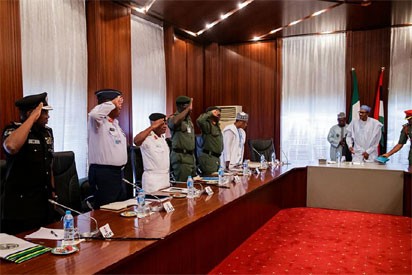 Killings: Sack your security chiefs now, they lack fresh ideas, Senators to Buhari
SENATORS, yesterday, lampooned the federal government over the spate of killings across the country, saying there was total leadership failure in the handling of security challenges in Nigeria. President Muhammadu Buhari The senators, who spoke on the floor of the Senate, expressed anger, frustration and disillusionment, with a call on President Muhammadu Buhari to urgently sack all the security chiefs, alleging that they had lost ideas. According to the senators, there is need for the security chiefs to be replaced in order to inject fresh blood, ideas and vigour in the fight against the wanton killings in the land. The senators who spoke separately on the renewed killings by herdsmen and criminal militia groups, said because Nigerians were increasingly becoming disappointed and frustrated over government’s failings and inactions on the insecurity in the land, democracy had become endangered. They also noted that as lawmakers, they were tired of observing a minute silence almost everyday in honour of those killed. The position of the senators came up yesterday as contributions to a motion through a point of Order by Senator Suleiman Adokwe, PDP, Nasarawa South, on the killings in his senatorial district. The Senate, after adopting the motion by Senator Adokwe, also asked the President to seek immediate help from the international community to curb the security problems in Nigeria, just as the lawmakers observed a minute silence in honour of 32 lives lost in Nasarawa. The senators also urged President Buhari to direct the armed forces and other security operatives to come to the aid of the citizens and restore normalcy all over the country and mandated the Senate Ad-Hoc Committee on the review of the security infrastructure in the country to investigate the matter. In his contribution, Senator Solomon Adeola Olamilekan, APC, Lagos West, noted that there was the urgent need to inject fresh ideas into how the security problems in the country could be remedied, adding no where was safe in the country anymore. Adeola, who called for the immediate removal, from office, of all the service chiefs, said the security chiefs have failed to proffer solutions to incessant insecurity involving loss of hundreds of lives of Nigerians. He said: “I want to commend the leadership of the Senate for the Security Summit it organised recently and the report and recommendations. But so far, the security situation has not improved and what the President needs at this time is fresh ideas on how to tackle numerous security challenges confronting the nation.” Fresh ideas needed He argued that the only way to get fresh ideas for the President to address the security challenges was to remove the incumbent service chiefs to give room for those with fresh ideas. “We know the way the military organisations operate. Those with fresh ideas dare not come out against their superiors or else they risk premature retirement from service. So the current service chiefs should go to allow officers with fresh ideas address our alarming security issues,” he added. Also in his contribution, Senator Jeremiah Useni, PDP, Plateau South East, identified the constant clashes among security agencies as part of the security problems, asking that heads of such agencies be removed to pave way for more harmonious relationship among security agencies. Earlier in his presentation, Senator Adokwe said: “Through out the weekend and up to the moment that I am speaking, herdsmen have unleashed terrorism and mayhem on the people of my senatorial district, leaving many dead bodies, numerous wounded persons and hundreds of thousands of internally displaced persons. The victims are largely the Tiv speaking ethnic nationalities with a reported dead toll of 32 persons and we are still counting. The real tragedy “The real tragedy is not in the well coordinated and simultaneous carnage across Awe, Obi, Keana and Doma local government areas of Southern senatorial district but the tragedy lies from the fact that for four days running, this mayhem continues unhindered, unchecked, unstopped by any arm of the law and security enforcement agencies. “Right under the nose of the armed forces and the police, this killing is sustained unabated by sheer negligence or refusal to act by the security agencies. It is very sad that in Nigeria, with all the security forces a whole senatorial district will go on being punished by militia and no action coming from government. This is a sad commentary.” Senator Adokwe who expressed shock that despite the existence of an army base close to where this carnage was taking place, there was no single shot fired by the army. He said further: “It baffles me and beats my imagination that a whole enforcement agency of the Nigerian state will stand by and witness Nigerians being killed endlessly. Nobody can explain this. “It is no wonder that very eminent Nigerian citizens have urged Nigerians to defend themselves because their life is in their own hands and no longer in the hands of the Nigerian security forces.’’ Also contributing, Senator Barnabas Gemade, APC, Benue State, noted that the country was becoming a state without control, a state experiencing anarchy and a state witnessing ethnic cleansing. He said: “It is a shame that a sitting government could watch criminality go to the level that we have seen it today and rather than rise and take very decisive steps against it, we embark on deniability and simply shield this evil by just explaining with flimsy excuses that these are communal clashes in those communities.
Share
Facebook
Twitter
WhatsApp
Pinterest
Linkedin
ReddIt
Email
Print
Tumblr
Telegram
Mix
VK
Digg
LINE
Viber
Naver
Previous articleFalae meets with OBJ over state of the nation
Next articleAsiwaju Bola Tinubu blames GEJ, others for country’s woes