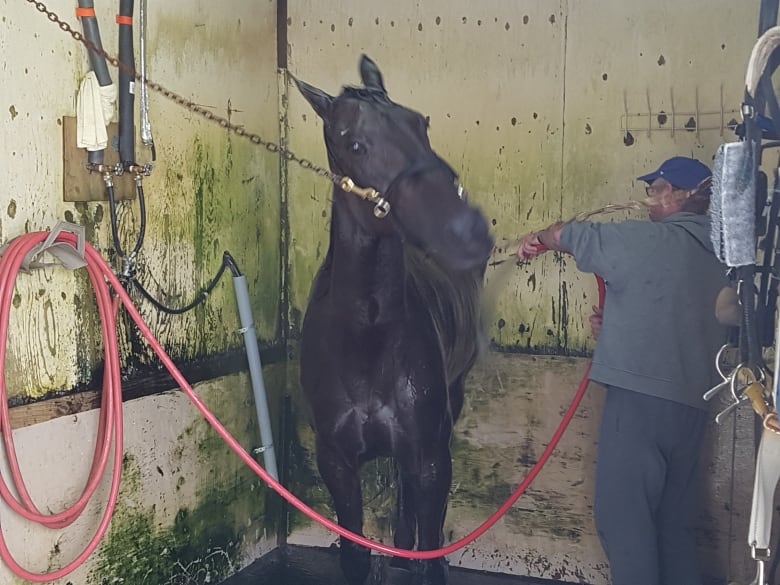 Wayne Hubbard is a fixture at Exhibition Park Raceway in Saint John.

He started going there as a youngster, “got hooked” on harness racing, and has been going there ever since.

“If you can’t find me at home, find me here. It’s just my second home.”

He’s just come off the track after a brief training session with his horse, Pickpocket Princess, which finished with a shampoo and rinse in the barn to remove any sweat and grime from her afternoon exercise.

His whole family is involved in harness racing, including his mother, who helps out in the raceway’s canteen when she can.

So, it came as a shock when the horse owners received a notice saying the track’s lease with the Exhibition Association would not be renewed.

“I just moved back home in March to be with my family,” she said. “I was away in Ontario for 22 years and I wanted to come back to my family because we’re all involved in harness [racing].”

She has four standardbreds here at the raceway, including Nannie Bernice, coming off a big win this past week in Summerside, P.E.I..

“A lot of people have jobs here and they have a racehorse because it’s their hobby and that’s what they like to do,” Hubbard said.

“Myself, this is my bread and butter right here and that’s why I raised my young horses and I have money invested and I want to see this place stay and I hope the right person takes over and makes it happen.”

But that doesn’t seem likely as things stand right now.

In a statement, the association said: “the Board has made the decision to position itself to be able to explore opportunities that may have the potential to make better use of the lands and facilities, thus providing a greater service to the greater Saint John community.”

Harness Racing New Brunswick, which operates the track, did make a last-minute offer that included increased rent, but it did not seem to change the minds of the association board members.

Harness Racing N.B. has said it will likely move its operations to Woodstock, N.B.

“The people that are in the game here are only in the game because there’s a track in Saint John,” Hodgin said.

“All the people that have horses around … they’re only here because we live in this area and it’s the only race track in the southern part of New Brunswick that anybody can actually exercise their horses, even if there’s no racing, you know. That’s where we take care of our horses on a daily basis.”

For most of them, moving to Woodstock is out of the question.

Janice Hubbard does have the ability to move where the action is, but she came back to Saint John this year to be near her family, and the thought of moving again makes her well up with tears.

“It’s tough. I can’t make that decision. I don’t want to make the decision and I’m a positive thinker and something has to — somebody’s going to come up with something, I’m praying.”

The closure comes at a time when the raceway was actually seeing a bit of a renaissance.

Hodgin said the pandemic brought new people to the track, looking for an outdoor activity, and races this year saw “tremendous crowds.”

Hodgin said there will also be an economic impact of a closure, with farmers and feed stores seeing a drop in demand for hay and feeds, and veterinarians losing business.

He also makes his living as a farrier, and shoes all of the 30 or so horses at the raceway.

He’s expecting at least a 25 per cent drop in business and said it will be a hardship.

Hodgin said it will likely curtail standardbred breeding programs in New Brunswick, too.

“[Harness Racing NB] put in a new breeding program the last couple of years and it’s just starting to pick back up. And so, people have invested in breeding horses and now all of a sudden … the place is going to be closed.”

“So, in the midst of a rebuild of a breeding program the carpet is going to be hauled out from under them.”

The last race of the season is scheduled for Oct. 15. It may be the last race run on the property, which has a racing history that traces back almost 150 years.

If it is, Wayne Hubbard said he is not likely to part with the horses he cares for every day.

“I don’t know if I’d sell them,” he said. “They’d end up out in the field someplace. I don’t think anybody else would have them.”

“I’d end up paying for them to be out in somebody’s field.”