Police investigate spate of violence in Vancouver’s Downtown Eastside, including attack with crossbow 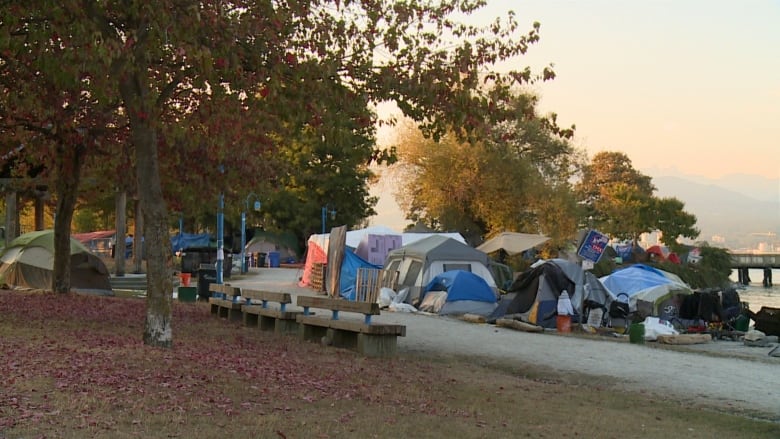 The Vancouver Police Department is investigating a string of violent attacks over the Thanksgiving weekend, including five stabbings and an attack on a man with a crossbow arrow.

Advocates for vulnerable people in the city’s poorest neighbourhood said the spate of violence is, in part, a result of the stress people who live in tent encampments face from being moved by city officials.

In August, violence erupted and a number of people were arrested in the Downtown Eastside as city staff began enforcing a fire order to clear a tent encampment, saying the tents were a fire safety hazard.

Then early Saturday morning, officers say witnesses reported a “stabbing spree” at CRAB Park, another downtown park, which also has a tent encampment. Three people were seriously injured according to police.

According to police, two of the victims fled the park and approached officers who were patrolling nearby around 3 a.m. PT.  Around the same time, a 911 call from inside the park reported a man stabbing random people at the tent encampment.

When officers arrived, they found the third victim in the park and arrested the suspect, a 42-year-old man, as he tried to leave the area. He remains in custody.

Police believe there may be other victims who fled the park before they arrived.

“This weekend has been particularly violent,” said Sgt. Steve Addison on Sunday.

Addison said the suspect arrested in relation to the CRAB Park stabbings was a resident at the tent encampment there.

‘It’s a miracle that it didn’t kill him’

Later on Saturday afternoon Addison said officers were called to the corner of Carrall and Hastings Street where a man was struck in the chest by an arrow believed to be shot from a crossbow.

Addison said a bystander had removed the arrow and was performing first aid on the victim when emergency responders arrived. The victim was taken to hospital for further treatment.

“It’s a miracle that it didn’t kill him,” said Addison about the attack. He said it was not related to the previous stabbing incidents.

Police believe the victim was targeted. Officers have not yet identified the suspect, nor made any arrests.

Deputy Chief Howard Chow said on Twitter that since Friday at 6 p.m. VPD had responded to 1200 individual calls. They included ones involving 23 weapons and 34 assaults in progress.

Addison said weapons and violence in the Downtown Eastside continue to be prevalent around a tent encampment on Hastings Street.

“But to have this level of violence in such a short period of time in a neighborhood that already faces a significant amount of violence and disorder is very concerning.”

‘A lot of distrust’

Many tents still remain along Hastings Street as officials continue to try and get people to move but not in the same large scale way as in August.

Tao said people staying there are not coping well because they’re being harassed by police or coerced by city staff. The threat of being ousted still remains, and they have nowhere to go.

“Conditions on the street have become chaotic,” he said. “These conditions create a lot of distrust of others, a lot of chaos on the street and unfortunately people are taking out their frustrations laterally on each other.”

This week residents and supporters of people living in the sidewalk tent encampment announced they are seeking a judicial review to strike down the July 25th fire order calling for the removal of all tents and structures.