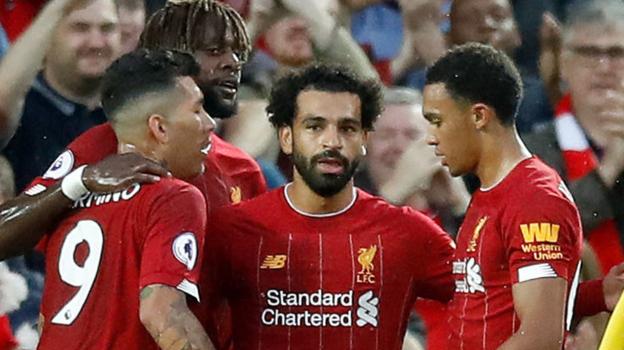 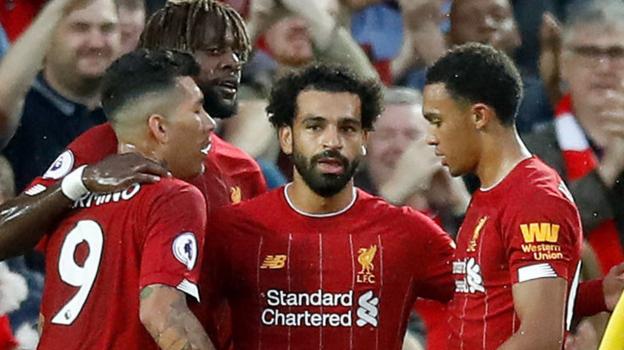 Norwich captain Grant Hanley scored the opening goal of the top-flight season when he sliced Divock Origi’s cross into his own net before Mohamed Salah opened his account after a pass by Roberto Firmino.

German midfielder Marco Stipermann forced a fine save by Reds keeper Alisson before an unmarked Virgil van Dijk headed the third from Salah’s corner, Origi nodding the fourth after a stunning pass by Trent Alexander-Arnold.

There was a carnival atmosphere at Anfield for Liverpool’s first home game since beating Tottenham in the Champions League final on 1 June and Jurgen Klopp’s side responded with a superb display.

They might have won by a more handsome margin as Tim Krul palmed Origi’s attempt onto the bar after making a brilliant save to keep out Firmino’s ferocious volley. Krul also did well to keep out Alexander-Arnold’s late free-kick.

Any fears Liverpool might be suffering a hangover after missing out to Manchester City by one point in the race for last season’s title were quickly dispelled as the Reds started their quest to win a first top-flight title in 30 years in style.

Supporters were looking for evidence Klopp’s team can go one step better than last season and, while bigger tests lie ahead, a thumping win against a team fresh out of the Championship is a decent start.

After a quiet summer in the transfer market, it was the same familiar faces on show including nine players who started the win over Spurs in Madrid in June.

Origi, who came off the bench to score in the Champions League final win, helped his side take the lead with a cross which ended in the back of the net after Hanley’s misfortune.

Salah doubled the lead with a trademark low angled finish after Firmino’s assist before Salah turned provider with the corner for Van Dijk to make it 3-0.

Liverpool were coasting and even after losing Alisson to injury they increased their advantage after Alexander-Arnold’s sublime pass allowed Origi to head the fourth goal.

On a night of positives for the home side, Joe Gomez came through his first league game of 2019 after recovering from a fractured leg.

Alisson gives Klopp cause for concern

Klopp said he was worried about the injury suffered by Alisson, who was a key figure in Liverpool’s eye-catching 2018-19 season.

After slipping in front of the Kop, the Brazilian received treatment on the pitch before a stretcher was brought on.

Alisson eventually managed to get back to his feet and leave the field with help from a physio, but any prolonged absence would be a blow for Liverpool.

“With Alisson it is not good, but we will find a solution and move on,” Klopp told BBC Sport’s Match of the Day.

“He felt his calf. He looked behind him because he thought something hit him.”

The German added that the Brazilian would not feature in Wednesday’s Uefa Super Cup match against Chelsea.

Former West Ham keeper Adrian, brought in to replace the departed Simon Mignolet earlier in the week, made one fine save from Moritz Leitner before being beaten by Pukki.

This was Norwich’s first Premier League game since losing 3-0 at Liverpool’s neighbours Everton in May 2016, having already been relegated. They fared no better on their return to Merseyside.

In truth, next week’s home game with Newcastle will provide a better gauge of how the Canaries will fare this season.

“One-nil in the second half,” was the defiant song that rang out.

Norwich have been busy in the transfer market and although none of their new recruits started at Anfield, expect that to change when they return to Carrow Road next week.

‘I’m totally in love with this team’ – reaction

Liverpool boss Jurgen Klopp told Match of the Day: “For 60 minutes we looked very sharp, then we have to control the game a bit more. Norwich have all my respect – they stayed cheeky, they enjoyed their football.

“At the start of the second half we could have scored a fifth or sixth goal, then Norwich scored. After that we were never in danger but had to work hard to keep the score what it was.

“The players had a break (over the summer). For the body it was long enough, nobody asked for longer, so they didn’t lose a lot of their physical standards. We have to be a bit smart for the next two games, we have to make a few decisions and try to win both of those games, which will be difficult.”

Norwich boss Daniel Farke speaking to Match of the Day: “We’re disappointed. We were greedy, we wanted to be the first team in two-and-a-half years to win here.

“But I’m totally in love with this team. The mentality to win the second half in front of an excited home crowd, we showed great character.

“No-one wanted to hear it at half-time, but I told them we had the same possession and had created more chances. Liverpool had scored four though.

“It was tough to take but I felt we were not too far away from a good result.”

Liverpool are off to Istanbul to face Chelsea in the Uefa Super Cup on Wednesday (20:00 BST) while Norwich have a full week to prepare for the visit of Newcastle United to Carrow Road on 17 August (15:00).