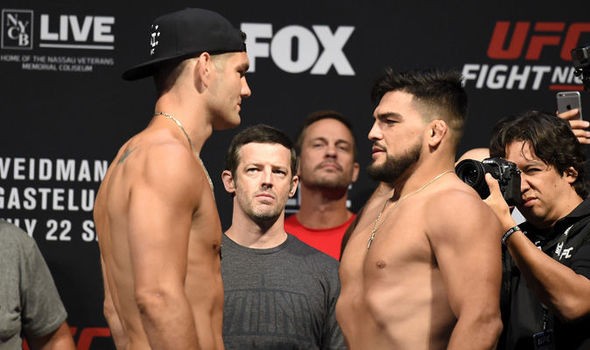 Dulorme was scheduled to face former welterweight world titleholder Shawn Porter, but he withdrew on less than two weeks’ notice following a death in his family.

Ugas dropped Dulorme twice in the final seconds of the second round, first with a big right uppercut. Moments later he was down again but did not appear badly hurt either time.

“I knew that Dulorme had a great camp preparing for Shawn Porter, so when I knocked him down I figured he would get up,” Ugas said. “I only had nine days to prepare for this fight so I had to be smart and not waste anything. I hit him with some really good shots but he got up. He’s a warrior. When you take big fights on short notice it’s a little tougher but I’m happy I got the victory.”

Dulorme, 27, a former junior welterweight world title challenger from Puerto Rico, fought his way back into the fight and they were trading fierce shots in the sixth round, when Dulorme angered Ugas, a 2008 Olympic bronze medalist from Cuba, with a low blow that referee Vic Drakulich viewed as borderline.

“It was a good fight. It was a very tough fight.” Dulorme said. “I came to fight and I took him seriously. I kept working. It was up and down, but I kept working. I thought he was tired late in the fight so I tried to increase the pressure, but it was hard because the referee didn’t let me work on the inside like I wanted to.”

In the seventh round, Dulorme connected with a left hook and a clean right hand that dropped the Miami-based Ugas, 31, to his backside but the round ended before he could get off another punch.

“When I got knocked down I knew I had to get up and show heart and guts,” Ugas said. “That was the only way to do it. I got a little tired at the end and should have closed the show. But that happens with short notice fights. I just have to keep getting better.”

LAS VEGAS — In the bout that opened the Fox telecast of preliminaries, junior welterweight Juan Heraldez (13-0, 8 KOs) won a unanimous decision against fellow prospect Jose Miguel Borrego (13-1, 12 KOs). Heraldez, 27, of Las Vegas, survived a ninth-round knockdown and won by sores of 97-92, 97-92, 96-93. Borrego, 19, of Mexico, sent him to the canvas with a right hand during a flurry of shots but it was too little, too late.

Super middleweight Savannah Marshall (1-0), 26, a 2016 British Olympian and the only woman to defeat two-time U.S. Olympic gold medalist Claressa Shields in her 77-1 amateur career, made her professional debut by rolling to shutout decision against Sydney LeBlanc (4-3-1, 0 KOs), 33, of Lafayette, Louisiana. All three judges scored the fight 40-36.

The women opted to fight three-minute rounds rather than the usual two minutes woman typically fight in Nevada.

“I felt brilliant. I’m really glad it was three-minute rounds because I prefer that over two-minute rounds,” Marshall said. “She was really tough like I knew she would be. I’m glad that I got out of there with a win against a top class opponent. I’ve been looking forward to this all week so I’m really excited about my performance. The build-up this week has been great.”