Liam Fox: No deal most likely Brexit outcome for UK 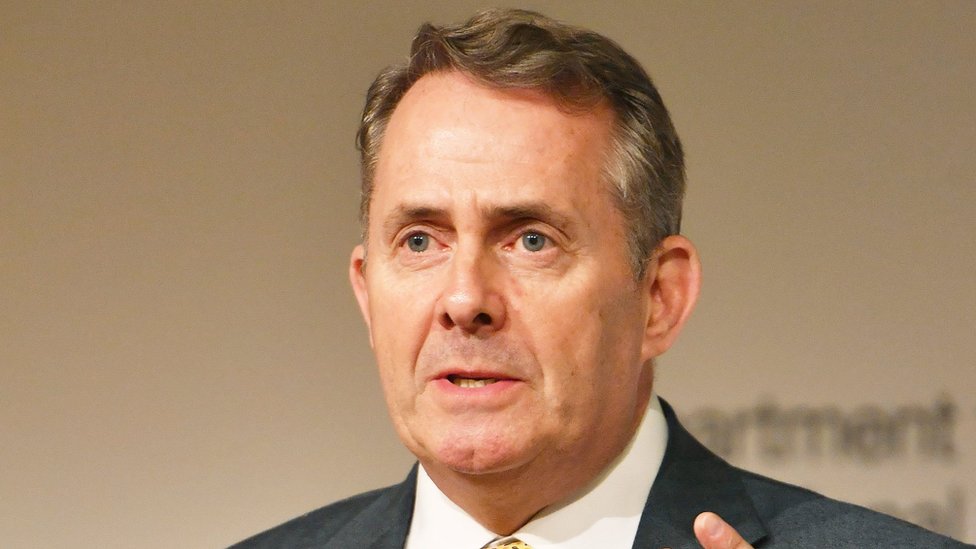 Liam Fox says the chance of a no-deal Brexit is growing, blaming the “intransigence” of the European Commission.

The international trade secretary and Brexiteer put the chance of failing to come to an agreement at “60-40”.

He told the Sunday Times that Brussels’ chief negotiator had dismissed the UK’s Chequers proposals simply because “we have never done it before”.

No 10 insists the government remains confident it can get a good deal.

Mr Fox told the paper that he had not thought the likelihood of no-deal was higher than 50-50, but the risk had increased.

He said the EU had to decide whether to act in the economic best interests of its people, or to go on pursuing an approach determined by an obsession with the purity of its rules.

“I think the intransigence of the commission is pushing us towards no deal,” he said.

The government has been touting its plans for Brexit agreed at Chequers – the prime minister’s country residence in Buckinghamshire – to the EU and its leaders, including the French President Emanuel Macron, whom Theresa May met on Friday.

But Mr Fox claimed Michel Barnier, the EU’s chief negotiator, had already dismissed the proposals, which “makes the chance of no deal greater”.

He said: “We have set out the basis in which a deal can happen but if the EU decides that the theological obsession of the unelected is to take priority over the economic wellbeing of the people of Europe then it’s a bureaucrats’ Brexit – not a people’s Brexit – then there is only going to be one outcome.”

Mr Fox said if the EU did not like the proposal, they should “show us one that they can suggest that would be acceptable to us”.

He added: “It’s up to the EU27 to determine whether they want the EU Commission’s ideological purity to be maintained at the expense of their real economies.”

On Friday, the governor of the Bank of England, Mark Carney, warned that the possibility of a no-deal Brexit was “uncomfortably high”.

Mr Carney said that if a no-deal Brexit were to happen, it would mean disruption to trade and economic activity, as well as higher prices for a period of time.

But he said that the UK financial system was robust and could withstand any post-Brexit shocks.

The comments led to a decline in the pound on the currency markets and saw him labelled as “the high priest of Project Fear” by Leave-backing MP Jacob Rees-Mogg.

‘Worst of both worlds’

Meanwhile, another prominent Brexiteer, former minister Priti Patel, has called on Mrs May to have the “backbone and confidence” to back Britain in the negotiations with the EU.

Writing for the Telegraph’s website, she said the UK was in a “strong position” when it came to a future trade deal because “we are dynamic, competitive and growing” – while the EU “desperately needs our money”.

But unlike Mr Fox, Ms Patel does not back the Chequers deal, which has already led to a number of resignations from the government – including David Davis as Brexit secretary and Boris Johnson as foreign secretary.

She wrote: “It will leave us half in and half out, still bound to EU regulations and constraints.

“[It will be] the worst of both worlds – effectively out of Europe but still run by Europe.”

The UK and EU say they want agreement before the exit on 29 March 2019.