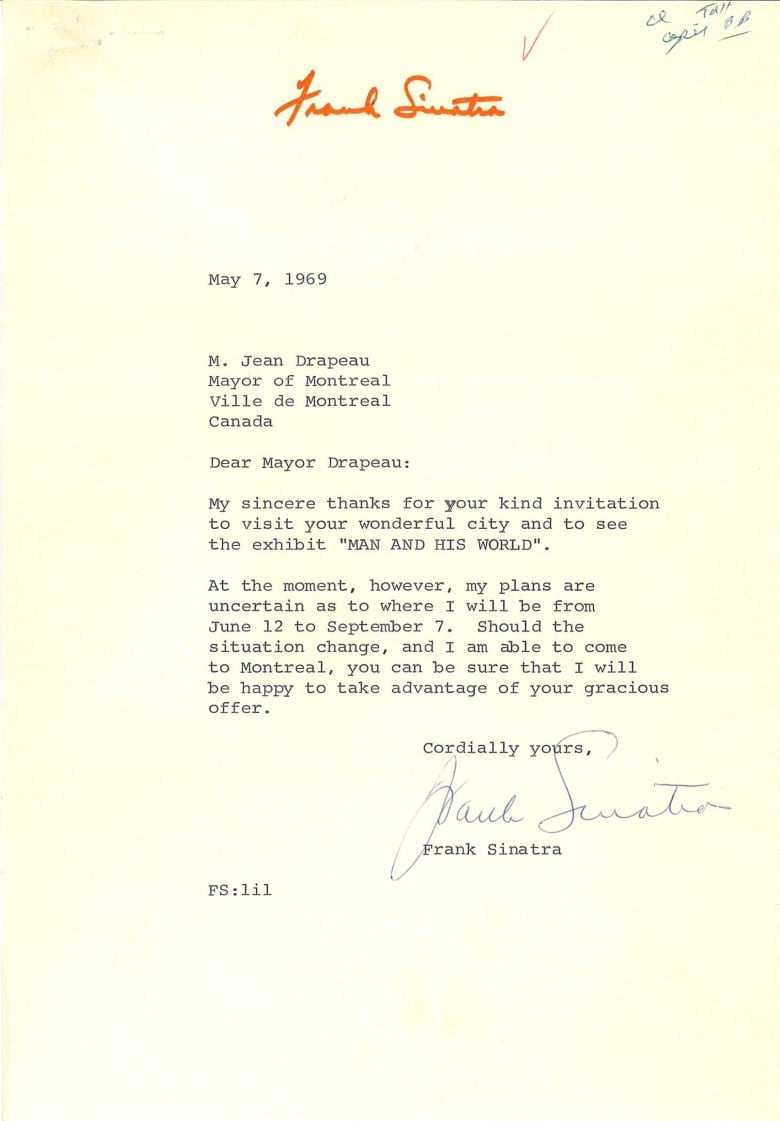 Jean Drapeau’s crusade to transform Montreal into a world-class city is well-known: he lobbied long and hard to win Expo 67 and the 1976 Olympics, and to bring Major League Baseball to town.

Behind the scenes, too, Drapeau launched a charm offensive, writing letters to some of the biggest stars of the 20th century, offering them the opportunity to travel to the city and stay as his personal guest.

“He was a good correspondent. If he got your number, he would make sure he’d take advantage of it,” said journalist Brian McKenna, who co-authored a biography on Drapeau.

“He was very quick to take advantage of their celebrity and ride it for his own purposes, which were to promote Montreal, to make Montreal a number one city in the world.”

Drapeau’s correspondence with celebrities is part of his personal archives, now open to the public at the Montreal archives.

His extensive collection of letters, photographs and diaries fill more than 700 boxes. They were released last month, 20 years after the former mayor’s death, at 83.

Promoting Man and His World

In 1969, the mayor invited Frank Sinatra to see Man and His World, a collection of international pavilions that stayed open after the official Expo ended. Drapeau wrestled funding from the provincial and federal governments to keep the exhibition running. He wanted Man and His World to succeed.

“Dear Mr. Sinatra,” he wrote. “Though I may be biased, I think you will find both Montreal and Man and His World are fascinating.”

Sinatra responded, saying he was busy, but “should the situation change, and I am able to come to Montreal, you can be sure I will be happy to take advantage of your gracious offer.”

He extended a similar invitation to Jackie Robinson in 1969, who accepted before later declining.

“Please explain to the Mayor I am really sorry, for as you know, Montreal will always be our favorite city,” Robinson wrote in response.

Robinson played for the Montreal Royals, a farm team of the Brooklyn Dodgers.

“Dear Mayor Drapeau,” Bing Crosby wrote in 1967, “I have just returned from Expo 67, and to my mind, it’s quite the most fantastic function of its kind ever conceived, created and executed by modern man.”

“The good taste, the ideal location, and the theme behind it all, all are elevating influences, and La Ronde surely is the finest amusement park ever built. It’s clean, it’s colorful, and it’s fun,” he wrote.

“These are the celebrities of the 20th century,” said Montreal archivist Mario Robert. “To have it in our archives, that’s very great.”

Robert has studied Drapeau’s letters and documents. The letters were written by Drapeau himself, each tailored specifically for the recipient, indicating the mayor’s personal relationship with many of the celebrities.

The archivist said it is unusual for a mayor to write letters to celebrities, but Drapeau aspired to make Montreal internationally renowned.

“As the mayor of Montreal, Mr. Drapeau always said that Montreal has to be an international city, and to prove to the world that French Canadians were capable of doing great things. That’s why he wanted people to come to Montreal, to look and see how great our city was at the time. And it’s still great,” Robert said, smiling.

Drapeau’s time in office has received mixed reviews. The scandal-ridden 1976 Summer Olympics left Montreal with a billion-dollar debt. His administration felled thousands of trees on Mount Royal and razed entire low-income neighbourhoods, with little in the way of compensation for the longtime reisdents forced to move out.

Over that time, Montreal beat out Los Angeles and Moscow in the bidding to host the 1976 Olympics. Documents in his personal archives show the extent to which he lobbied for the games, even noting some voting delegates’ favourite brands of scotch to send as gifts.

He was also responsible for Expo 67, for bringing major league baseball to the city in the form of the Montreal Expos, and for digging up the city to build Montreal’s Metro transit system — the second in Canada, and the first to run quietly on rubber tires.

Drapeau also appeared twice on the Ed Sullivan show — no small feat for a Canadian mayor.

“Jean Drapeau had a sense of, if you’re going to do it, do it well and do it big,” said Brian McKenna.

“Montrealers paid for this. Sometimes happily, like in Expo 67. Sometimes not, as in the Olympics.”