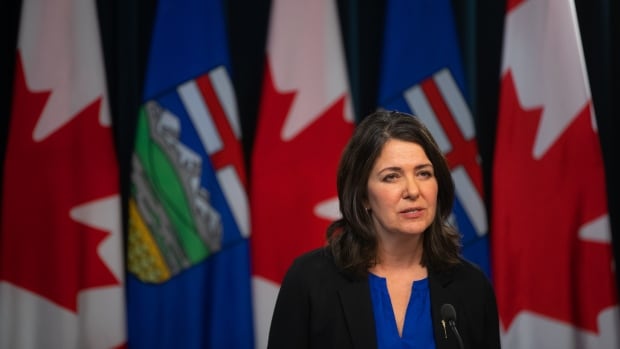 Opposition NDP Leader Rachel Notley said the government was on pace to pass the bill Wednesday night or in the early hours Thursday, saying Smith’s United Conservatives are desperate to take the controversial bill out of the spotlight.

“I suspect we’ll see them jam it through today in order to try to change the channel from the growing chorus of critiques from investors, legal scholars, business owners, regular Albertans, treaty chiefs, you name it,” Notley told reporters.

“The concerns are growing, and they want to run away from what was supposed to be the premier’s flagship bill.”

The bill, titled Alberta Sovereignty Within a United Canada Act, was introduced just over a week ago by Smith as the centrepiece legislation of her government to resist what it calls federal intrusion in areas of provincial authority under the Constitution.

By the weekend, the premier was promising changes to counter widespread criticism that the bill would grant her cabinet ongoing emergency-type powers to rewrite laws outside the legislative process to fix whatever it deemed to be federal harm, or even potential federal harm.

Smith has said the powers weren’t supposed to be in the bill, but has not explained how they came to be included.

On Tuesday night, the legislature began debating an amendment brought forward by the UCP caucus to reverse those powers and narrow the definition of federal harm.

UCP backbencher Mark Smith introduced the amendment. He said it was needed to make it clear that the legislature is still in charge of law-making.

“The goal was — or at least it should have been — for all elected members to consider how to make a bill better,” he said.

“Tonight, I’ve placed an amendment before this house, which I believe will clarify this bill and the intent of this bill.”

He introduced the amendment after members of the house passed a motion by Joseph Schow, government House leader, to limit further debate on second reading of the bill.

Schow also signalled he will bring forward motions to limit debate if necessary at the amendments stage and at third reading, which is the final stage to pass a bill.

Such measures are allowed to balance debate with keeping the business of the house moving.

Schow said there had been nine hours of debate on the bill at second reading and that the NDP had said it had no interest in contributing to the bill and has called for it to be scrapped altogether.

“There has been plenty of time for members to speak,” Schow told the house Tuesday night.

“It’s time the government did what it has promised Albertans it would do this fall and get things done with Bill 1.”

Legal scholars say the bill remains legally questionable given it says the legislature, not the courts, get to decide what is and is not constitutional.

There are also worries about the legal uncertainty that could result if cabinet uses its powers under the bill to direct municipalities, health regions, schools and city police forces to resist implementing federal laws.

Some business groups, including the Calgary Chamber of Commerce, have warned that such uncertainty is bad for business.

“We should not shoot ourselves in the foot by creating an impression that investors cannot rely on the rules, on the laws and on the processes that we have in place in Canada,” Dodge said.