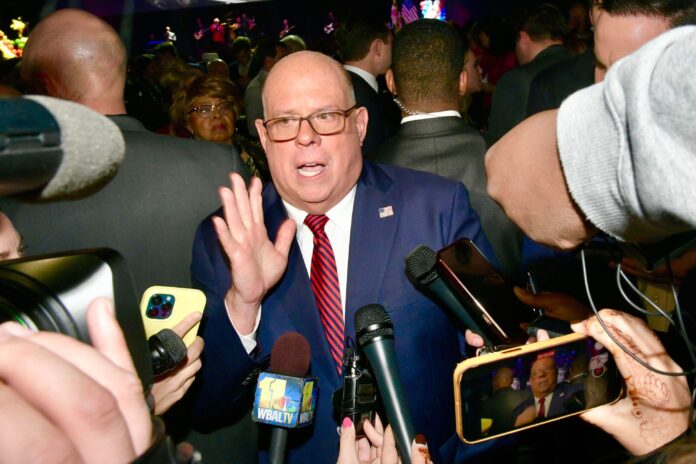 ARUNDEL MILLS, Md. — Larry Hogan wants you to know that he’ll work with Democrats. He’s done it for eight years as a moderate blue-state Republican governor. And he’ll do it again if you let him. In perhaps some other capacity. That he’s not ready to discuss. Until early next year.

“I don’t really want to give any long, boring political speech because we’re going to have a good time,” Hogan told a crowd of 1,700 mostly very dressed-up supporters in a snazzy event hall at the Maryland Live! hotel and casino, where one of Hogan’s PACs, An America United, threw a party Wednesday with the ostensible aim of celebrating Hogan’s tenure as governor.

Hogan, as was mentioned frequently throughout the evening, is the only Republican ever reelected to the governorship throughout Maryland’s long history of rarely electing Republicans. Expect to hear that stat a lot more in the coming months.

“But I understand there has been some speculation about my future,” Hogan continued to a rising “wooooooo” from the audience. “I’m not going to be making any announcements tonight. My apologies to the media in the back of the room. But I think you all know that I care very deeply about this country. I’ve never been more concerned about the direction of our nation. What I can tell you tonight is that I am not about to give up on the Republican Party, or on America.”

On the right, only Donald Trump has announced his candidacy for president in 2024. But sometime soon — Hogan told reporters to expect an update once he leaves office in January — more than a dozen speculative Republicans will be making the decision about whether to officially enter the race against Trump. In the meantime, Hogan is making a show of huddling with high-profile supporters and has launched a few federal fundraising PAC, A Better Path Forward. His entire event was a preview of his prospective pitch: Here’s a moderate governor who has worked with Democrats to actually do things like lower taxes and create jobs (a record that will be scrutinized more closely should he run) and who, not inconsequentially, will happily tear into Trump.

“On the one hand, it’s so disgraceful, and more people should be speaking up,” Hogan said after reporters asked him about the latest horrifying news out of Mar-a-Lago: Trump’s meeting with white nationalist Nick Fuentes and Ye, better known as the rapper Kanye West. “On the other hand, you know, we have to stop talking about Donald Trump.”

And many Republicans already have, according to Hogan, who sees Trump’s once-robust base withering. “There was a time when almost 90% of the primary base was supportive of Trump. Right now, it’s at about 30% and, in my estimation, it’s gonna continue to drop,” he said.

The people who bought tickets to Hogan’s casino bash, where the soundtrack was video clips celebrating Hogan and a live band playing at an ear-piercing decibel, embraced a vision for the GOP that’s reasonable and willing to work with the other side. “We don’t have a lot of that in the Republican Party nowadays,” said Larry Johnson, a 56-year-old who works in banking. He rolled his eyes and sighed when asked about Trump’s return to the campaign trail.

The highlight reel of Hogan’s political career included a nod to his father, the late Rep. Larry Hogan Sr., who was famously the only Republican in the U.S. House of Representatives to vote for all three articles of impeachment leveled against President Richard Nixon. Hogan, 66, said his father’s example showed him that you always “put country first, above party.”

Hogan’s reel also ticked through the whiplash series of events that colored his early tenure in office: a cancer diagnosis, a mandate to repeal the previous administration’s taxes, and unrest in Baltimore over the death of Freddie Gray, the 25-year-old Black man killed in police custody. Toward the end of the clip, a Black resident praises Hogan for overruling Baltimore’s then-mayor and President Barack Obama by calling in the National Guard: “It took a Republican to come in to bring the people together,” the man says into the camera. “That’s what I saw.”

The Maryland voters who elected Hogan weren’t keen on extending Republican rule in Annapolis for another four years under a hard-right Republican whom Hogan called a “QAnon whack-job” and refused to endorse. The Trump-backed nominee, Dan Cox, lost overwhelmingly last month to Democrat Wes Moore, who will become the nation’s third-ever elected Black governor. Hogan has used that loss to argue that Trump’s elevation of unelectable, fringe candidates was to blame for the party’s lackluster midterms. “Excuses, lies and toxic politics will not win elections or restore America,” Hogan said last month at the Republican Jewish Coalition’s gathering in Las Vegas.

Hogan was and still is an “anti-Trump” Republican, a label that once conveyed a clear distance from and distaste for what had become the mainstream GOP under Trump. But the term is less potent now that at least a dozen Republicans, seeing an opening after the near-total bombing of Trump candidates in the midterms, are lining up to challenge Trump. It may be that Hogan shares the new anti-Trump banner with people like former Vice President Mike Pence and Florida Gov. Ron DeSantis, who will all be forced to make a case that Trump no longer speaks for the party.

Hogan’s remarks were followed by a sleek video that looked like something from a campaign launch and ended with the message: “This is just the beginning.” Then a spray of confetti rained down on the hall just a few seconds too late.