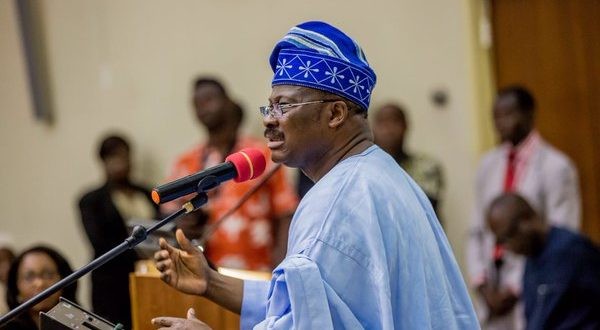 The All Progressives Congress in Oyo State has taken a swipe at former Governor Rashidi Ladoja over the claim that he was the initiator of the idea of Ibadan Circular Road project which Governor Abiola Ajimobi kicked off on Friday.

The ruling party described the ex-governor’s claim as ‘ridiculous, gibberish and misconceived’.

The kick off of the 110km road project occurred on Friday at Badeku in Ona-Ara Local Government Area of the state.

It was a partnership between the Ajimobi administration and a China-based consortium of global investors ‘who would solely finance the N70bn road project on a build, operate and transfer agreement with the Oyo State Government’.

In a statement issued on Sunday by its Director of Publicity and Strategy, Olawale Sadare, the Oyo APC condemned the claims by the Accord Party that the idea of a circular road for Ibadan was that of the former governor who ruled the state between 2003 and 2007 when his deputy took over from him in controversial circumstances.

“In the history of Nigeria, the period between 2003 and 2007 represents an era when little or no development took place in Oyo State as a result of the reign of terror occasioned by the hijack of power by some characters who should not have had any business in government.

“This was a period when violence, brigandage and lawlessness became the order of the day, while those at the helm of affairs could not do anything meaningful for the people.

“But for pettiness and vindictiveness, a supposed senior citizen should not have instigated any controversy over the idea of designing and constructing a circular road for a sprawling metropolis like Ibadan. The records are there for those seeking to alter history because the fact remains that the administration of Alhaji Lamidi Adesina came up with the idea in 2002 but due to paucity of funds, aborted the plan.

Sadare further claimed that rather than bring development to the state, the ‘Ladoja administration was characterised by incompetence, battle for political survival and corruption’.

According to the Oyo APC spokesman, the former governor’s four years in office was without any concrete achievement for the state.

Sadare added, “Also, the ill-conceived contract award of the circular road project he did as soon as he came back from his impeachment break in 2007 was cancelled by the Adebayo Alao-Akala administration immediately he (Alao-Akala) came to power to succeed Ladoja.”

The statement noted that Ajimobi would go down in the history of Oyo State ‘as a governor who raised the bar of good governance and purposeful leadership by defying all odds occasioned by lack of funds, unfavorable economic conditions and political distractions to bring about peace, security, infrastructural facelift, and value reorientation’.