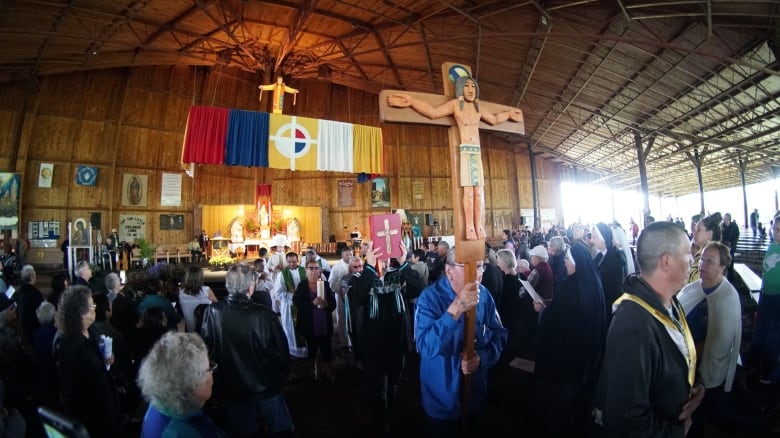 With the papal visit fast approaching, representatives from the Alexis Nakota Sioux Nation and Lac Ste. Anne Métis are welcoming the Pope to discuss the history and importance of the pilgrimage site.

Chief Tony Alexis from Alexis Nakota Sioux Nation says despite mixed emotions, he welcomes the Pope’s visit and believes it will be a historic moment.

“People of all faiths and races visit these waters, yet they are all praying to the same creator in the same spirit,” he said. “The lake has been a place – maybe unknowingly – for reconciliation between Indigenous and non-Indigenous peoples for over a century.”

Alexis said he travelled to the Vatican in 2016 and invited the Pope to attend the Lac Ste. Anne pilgrimage. Eight years later Francis has taken up the invitation as part of his visit to Canada.

During the trip to Canada, the Pope is expected to expand on the apology he gave last spring for abuse in residential schools run by the Catholic church.

“Pope Francis’s apology is an acknowledgement of the church’s role in the harm and pain caused to Indigenous peoples living in Canada,” Alexis said. “For some of our people, Pope Francis’ apology will not be enough. Healing is not linear.

“It is fitting that the Pope’s visit to this healing place will bring healing to so many.”

Tracy Fidel, spokesperson for the Lac Ste. Anne Métis said the papal visit is a chance to restore a “somewhat broken connection” between the Catholic Church and the community.

“The visit by Pope Francis is giving us the opportunity to heal this important relationship…we’ve been assured by the archdiocese that they are committed to working with the community on the issue of the unmarked graves and we are trusting in the church to follow through on this,” Fidel explained.

Although the pilgrimage site is not a former residential school, it is a national historic site and Fidel says ground penetrating radar has been conducted at the location.

Fidel also recognizes not everyone is welcoming the Pope with a positive sentiment.

“We understand that many have mixed feelings about the upcoming papal visit and we have deep respect for all of those sentiments.”

The Pope will spend an hour at the Lac Ste. Anne pilgrimage on July 26th, which is being held at the lake from July 26-29.