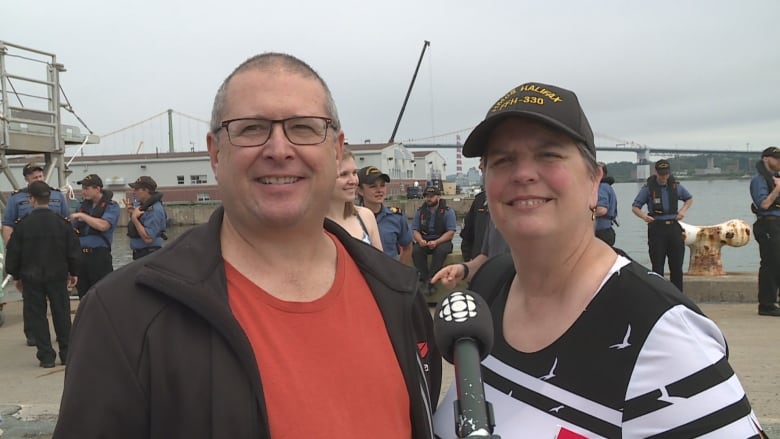 Two Royal Canadian Navy ships returned to port in Halifax after several months in European waters as part of NATO’s Operation Reassurance in support of Ukraine.

HMCS Halifax departed in March, joining HMCS Montreal, which had departed on a previously scheduled mission in January.

The ships, which have a combined crew of 492, arrived in Halifax Friday morning. They were greeted by friends and family who had been anxiously awaiting the return of their loved ones.

Gilles and Annie Levesque travelled from Gatineau, Que., to see their son disembark from HMCS Halifax.

It’s the second time their son has been deployed, but they weren’t able to travel to greet him last time because of pandemic restrictions.

“It’s important for Canada to show its place, show the world we’re here to support other countries when they need it, to show that Canada can make a difference,” he said.

Vicky Taylor, who hasn’t seen her partner in six months, echoed that sentiment, but said it’s been hard to live with the fear that something could happen to him, along with the uncertainty of not knowing where he was.

“They’re coming home after a very successful mission, where Canada proved its value as an ally, where Canadian sailors and aviators and soldiers on board did an outstanding job,”  Rear Admiral Brian Santarpia said at the arrival ceremony.

Operation Reassurance is meant to reinforce NATO’s defences and to show Canada’s support to its allies in the event of crisis or attack. It includes land forces and air forces as well as naval forces.

Typically, only one ship is deployed at a time for Operation Reassurance.

“After the invasion of Ukraine in February, the government of Canada decided we needed to send a stronger message to our NATO allies, and anyone who would threaten our NATO allies, by sending a second ship,” Santarpia said.

“The entire team did Canada proud and we should all be very proud of that.”