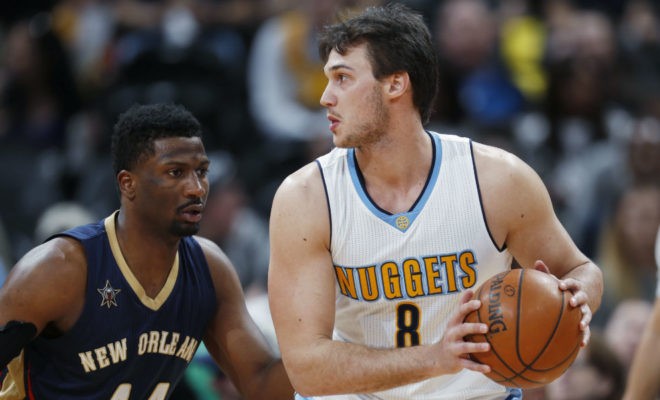 The L.A. Clippers announced Thursday the team has acquired forward Danilo Gallinari from the Denver Nuggets as part of a three-team trade that sends Jamal Crawford, Diamond Stone and L.A.’s 2018 protected first-round draft pick (via Houston) to Atlanta and a 2019 second-round draft pick from Atlanta (via Washington) to Denver.

Gallinari, 28, averaged 18.2 points, 5.2 rebounds and 2.1 assists in 63 games (all starts) last season with the Nuggets. An eight-year NBA veteran, Gallinari has appeared in 460 career games (390 starts) with Denver and the New York Knicks, and owns career averages of 15.3 points, 4.7 rebounds 2.0 assists. The Sant’Angelo Lodigiano native was originally selected by the Knicks with the 6th pick in the 2008 draft after spending four-plus years playing internationally in Italy.

Crawford played five seasons for the Clippers after signing with the team before the 2012-13 season. The three-time Sixth Man of the Year award winner averaged 12.3 points, 1.6 rebounds and 2.6 assists in 82 games (one start) last season. Over his 17-year career, Crawford has averaged 15.3 points, 2.3 rebounds and 3.5 assists in 1182 career games (433 starts). The Seattle native was originally drafted by the Cleveland Cavaliers with the 8th pick in the 2000 draft out of the University of Michigan.

Stone, originally acquired by the Clippers in a 2016 trade from the New Orleans Pelicans after being selected 40th overall in the Draft, played his rookie season with the Clippers. In his first NBA season, Stone averaged 1.4 points and 0.9 rebounds in seven games. The Milwaukee native played one season at the University of Maryland and averaged 12.5 points, 5.4 rebounds and 1.6 blocks in 35 games (all starts), helping lead the Terrapins to the Sweet Sixteen.