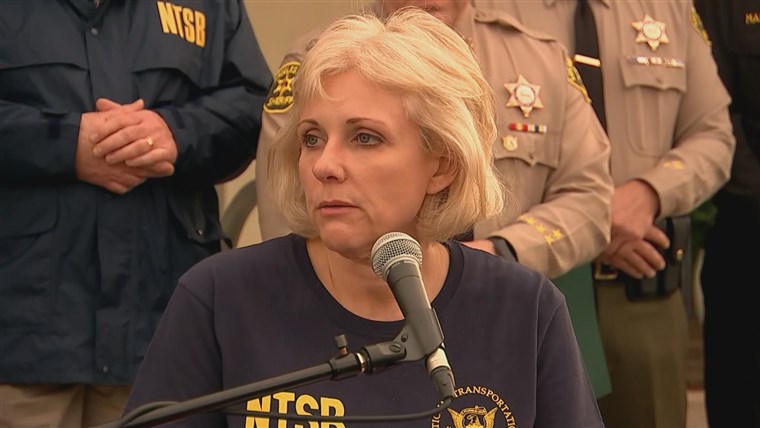 Kobe Bryant crash investigators looking at weather conditions, say there’s no black box, Federal investigators dispatched to a remote hillside above Calabasas, California, where the helicopter of NBA star Kobe Bryant crashed into flames Sunday, killing him, his teenage daughter and seven other people will focus on the poor flying conditions in the Los Angeles area, the possibility of human error or a technical malfunction, aviation experts say.

Authorities reported dense fog around the time the chopper departed John Wayne Airport in Orange County just after 9 a.m. Forty minutes later, a 911 call reported that the chopper, which had traveled northwest, had slammed into a field near Malibu, Los Angeles County fire officials said.

The pilot of the helicopter, a Sikorsky S-76B, had been given special clearance by air traffic control to keep flying in the declining weather, according to the audio of the exchange.

NBC News has confirmed the identity of the pilot as Ara Zobayan.

Bryant, 41, his daughter Gianna, 13, and the other passengers were reported to be headed to his Mamba Sports Academy in Thousand Oaks for a basketball tournament.

The fog was so thick Sunday morning that the Los Angeles Police Department decided to ground its helicopters until the afternoon. The police department requires 2 miles of visibility and an 800-foot cloud ceiling to fly.

Given the high-profile nature of the crash, investigators with the National Transportation Safety Board, or NTSB, will “spare no resources looking at it,” said Brian Alexander, an attorney at the aviation law firm Kreindler & Kreindler LLP in New York, which has represented passengers in major aircraft crashes. “The primary focus will be on the weather and the deteriorating conditions.”

NTSB board member Jennifer Homendy told reporters Monday that the pilot put in a request with air traffic control at Hollywood Burbank Airport to operate under special visual flight rules, which is granted to aircraft seeking to fly in weather conditions that are not ideal.

The helicopter circled for 12 minutes before it was given the authorization, she said.

The pilot had also asked for “flight following,” which means air traffic control would have been in regular contact and could help the helicopter avoid collisions with other aircraft.

But the controller said the helicopter was “too low level” to be picked up by traffic control radar. Then the communications cut off.

“There wasn’t a black box and there isn’t a requirement to have a black box on this,” Homendy said Monday.

Investigators are also looking into the weather conditions and asked anyone who has photos of the weather in the area of the crash Sunday to submit pictures to the NTSB.

Alexander, who is also a helicopter pilot, said investigators will coordinate with air traffic control to review communication logs and the flight path of the helicopter, as well as catalog the wreckage and examine the helicopter’s engine, rotors, control system, and other instruments.

“This is the most challenging situation for a helicopter pilot when you have these marginal conditions that are changing rapidly as you go along your flight path,” Alexander added. “You have to make some quick decisions, and the workload while flying grows, which can lead to disorientation.”

The Federal Aviation Administration says spatial disorientation occurs in flight when a pilot becomes confused and is uncertain where the aircraft’s position is in relation to the ground. Reduced visibility heightens the feeling, although an aircraft’s instruments are supposed to help pilots reorient themselves.

Spatial disorientation was to blame for the 1999 single-engine plane crash that killed John F. Kennedy Jr., who was piloting the aircraft, his wife, Carolyn Bessette Kennedy, and her sister Lauren Bessette, according to the NTSB.

The helicopter that was carrying Bryant and eight other people had circled over Glendale, just north of Los Angeles, several times about 14 minutes after takeoff, according to publicly available flight records. Before the crash, the pilot began to climb into the clouds, then took a sharp turn before slamming into the ground. The data shows that the aircraft descended at a rate of more than 4,000 feet per minute.

Homendy said investigators will review the history of the pilot and any crew who may have been on board, as well as maintenance records for the helicopter. The pilot had 8,200 hours of flight time as of records submitted in July, she said.

While the NTSB’s full report may not be ready for at least a year, preliminary findings could be made public in the coming days.

Kreindler & Kreindler attorney Justin Green, an aviation analyst, said that if the helicopter had a flight data recorder onboard, it would help indicate whether engine failure was a factor.

Kurt Deetz, a helicopter pilot who flew Bryant from 2014 to 2016 and is familiar with the Sikorsky S-76B, said the aircraft is “very dependable” and is equipped with a twin-engine.

“For something catastrophic to happen, like lose both engines, it’s just the likelihood of that is pretty slim,” Deetz said.

Sikorsky Aircraft said in a statement that it has been in contact with the NTSB and will assist in the investigation and notify customers of any “actionable findings.”

We extend our sincerest condolences to all those affected by today’s Sikorsky S-76B accident in Calabasas, California. We have been in contact with the NTSB and stand ready to provide assistance and support to the investigative authorities and our customer.

Bryant, who played two decades with the Los Angeles Lakers before retiring after the 2015-16 season, often used a private helicopter when flying from Orange County, where he lived, to Lakers games, which helped him to avoid traffic.

Deetz said the basketball great was friendly and “let you do your job,” no matter the weather.

Sikorsky’s S-76 series debuted in the 1970s and has had a good safety record, experts say. Its latest S-76D model comes with an autopilot option. It’s believed that Bryant’s chopper, an older S-76B model, had a cockpit voice recorder and should have been able to fly on instruments with GPS tracking and go into autopilot if needed.

Such helicopters often have two pilots, but it wouldn’t be out of the ordinary for an experienced pilot with proper training to fly solo, experts say. Investigators looking at this crash will want to examine the pilot’s record and perform a toxicology screening, as well.

Investigators will have a lot of ground to cover: The debris site is roughly the size of a football field. Officials said gathering evidence and recovering the remains of the victims will be a “logistical nightmare.”

“Given the terrain and condition of the site, it will probably take a couple of days to complete recovery,” Dr. Jonathan Lucas, chief medical examiner for Los Angeles County, told reporters Sunday.

Three bodies were recovered Sunday, and officials said they were taken off-site to be identified through methods such as fingerprint evaluation.

“We will be doing our work thoroughly, quickly and with the utmost compassion,” Lucas said.