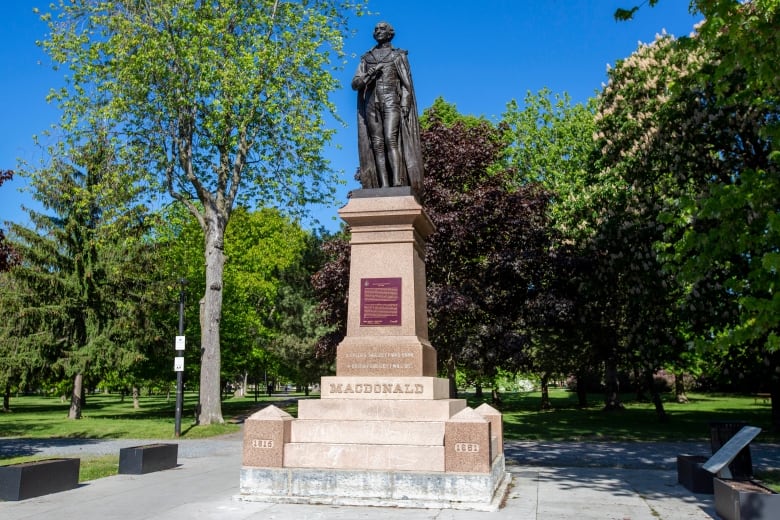 The statue of Sir John A. Macdonald that stands in a park near downtown Kingston, Ont., will come down — at least temporarily.

Kingston city council voted 12-1 after a long meeting Wednesday evening to move the statue of Canada’s first prime minister from City Park to nearby Cataraqui Cemetery, where the Father of Confederation is buried.

“I don’t know that I’ve ever encountered an issue where the two sides are so far apart,” Mayor Bryan Paterson said at the virtual meeting.

This council and the wider community have been talking with increased vigour in recent years about how Macdonald’s hometown should recognize both his achievements and racist policies, including centralizing and expanding the residential school system.

The national conversation changed again last month with the announcement of the discovery of what are believed to be the unmarked burial sites of children’s remains adjacent to a formal residential school in Kamloops, B.C.

‘A gesture of good faith’

In front of council on Wednesday were three options: keep the statue in the park about a kilometre west of city hall, take the statue down and temporarily place it in storage, or take it down before eventually moving it to the cemetery.

Twelve delegates presented to council over the more than five-hour meeting, with members hearing concerns about “cancelling” and the desire to add more information to the statue’s location in the park.

Councillors also heard about the immense harm residential schools have caused and the fear some Indigenous people have felt in the presence of the monument.

“I would say that the removal of John A. is a gesture of good faith,” said Natasha Stirrett, a Cree assistant professor at Carleton University who studies colonization and residential schools.

She said she was shocked by the alarmist tone of some who argued to keep the statue.

“Removing glorification of John A. … demonstrates an intention to move forward in a way that honours and respects our dignity,” she said before the vote.

“A plaque on the [statue] doesn’t do that. We don’t want to be tacked on the person who murdered us.”

A group of Indigenous-led activists have gathered around a sacred fire at the statue since Thursday, vowing to stay until it is taken down.

The group, called Revolution of the Heart, is asking the monument be replaced with one commemorating the more than 150,000 children forced into residential schools.

While city council ultimately voted to have the statue moved, some felt uncomfortable supporting the decision to move the monument to Cataraqui Cemetery — an option that hadn’t been brought to a working group determining options for the statue.

“This seems very hasty, and it seems very risky,” said Coun. Peter Stroud, who supported putting the statue in storage temporarily before deciding on a new location.

Others supported moving the statue out of concern it would be damaged if action wasn’t taken soon.

Paterson, who supported moving the statue to the cemetery Wednesday, said his opinions were largely informed by discussions with new Queen’s University chancellor Murray Sinclair and a desire to see conversations continue.

He had said in June 2020 the City Park statue wouldn’t be removed.

Statue to be displayed ‘in a different context’

This decision to move the statue to the cemetery doesn’t mean it can’t later be moved again, Paterson said, but demonstrated a commitment to not keep the statue in storage indefinitely.

Before the move to the cemetery, the motion requires consultations with local Indigenous peoples.