Refugees plead with Ottawa to bring their children, spouses from war-ravaged Gaza 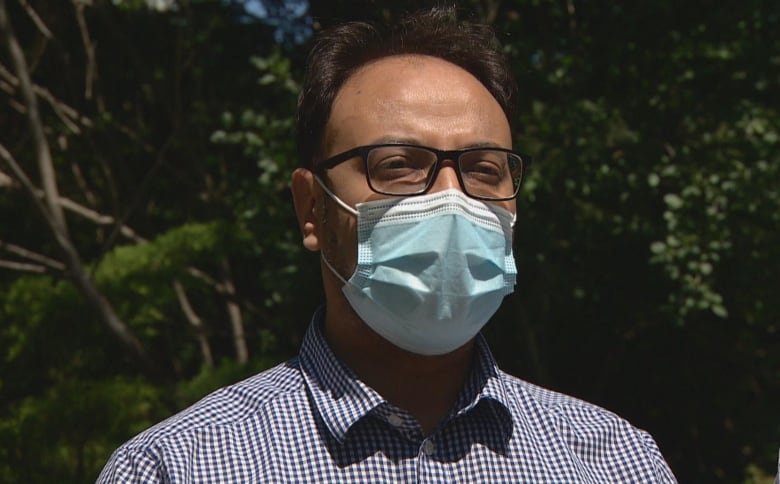 As Israeli airstrikes pounded Gaza last month, rocking the city around him, Mohammad Jadallah’s 13-year-old son tried to shield his younger siblings, hoping to keep them out of harm’s way.

It should have been Jadallah in his son’s place.

Instead, half a world away in Toronto, the Palestinian refugee found himself unable to protect his children — heartsick and waiting for any update that his family was safe.

“I cannot live, I cannot eat, I cannot concentrate in my work. I keep thinking about my family, how they are doing,” Jadallah told CBC News.

Jadallah is one of more than a dozen refugees in Canada who have been separated from their loved ones in war-ravaged Gaza for more than two years, desperate for the federal government to help their families escape the looming threat of violence back home.

It’s a situation all the more urgent now after Israel once again mounted airstrikes in Gaza on Wednesday — the first since a ceasefire ended 11 days of fighting in May — after the military said incendiary balloons were launched from the Palestinian territory.

Jadallah, who was designated a protected person in November, arrived in Canada in 2018. But despite moving quickly to apply for permanent residency status for himself, his wife and their five children, he faces a years-long wait for approval, slowed by COVID-19 delays.

‘I am asking Canada to save my life’

That wait could be the difference between life and death for families living under the spectre of war, advocates say. Without emergency action, Jadallah and other Palestinian refugee families fear it’s only a matter of time before their loved ones are in the line of fire.

Abdallah Alhamadni, a medical responder in Brampton, Ont., fled Gaza and arrived in Canada in 2019. His refugee claim was approved last December and he’s spent much of the pandemic transporting sick COVID-19 patients between their homes, hospitals or long-term care facilities.

Like Jadallah, he is desperate for the federal government to step in and grant temporary residency permits to his family and those of other refugees.

“I am a health worker. They call me a hero. But I want to be a hero in the eyes of my children,” Alhamadni said. “I am transferring COVID cases all the time, trying to help the community, trying to help people, trying to help Canada … Now I am asking Canada to save my life and my family’s life.”

Wednesday’s fighting took place only a kilometre away from his family’s home, where his children have been growing up without their father, their contact reduced to video calls whenever the electricity allows.

“We are aware of the situation faced by the dependents of resettled refugees who might remain in Gaza, and we continue to closely monitor the situation,” said spokesperson Peter Liang in a statement.

The department could not provide an approximate wait time on the processing of applications, citing the “many different variables involved.”

However, Canada has issued temporary residency permits in emergency situations before, including after the deadly fuel tank explosion in Beirut last August, the downing of a Ukraine jetliner by Iranian missiles last year and the Ethiopian Airlines crash in 2019, says Matthew Behrens, co-ordinator of the Rural Refugee Rights Network.

Just last week, Canada granted a temporary residency permit to the family of Ottawa’s Jihan Qunoo, who fled Gaza in 2019 and came forward to the media amid the fighting abroad, desperate to be reunited with her children and husband. The move came after a petition signed by some 25,000 people and several days of lobbying, said Behrens who was involved in Qunoo’s case.

“With war possibly breaking out again at any time, you can understand the fear and anxiety that they are all going through right now … So it’s really imperative that this is not something that gets dealt with six months or a year down the road, that it gets dealt with in the next couple of weeks.”

‘All we want is to live a normal life’

Temporary residency permits, once known as minister’s permits, are meant to be an exceptional remedy used to relieve particularly harsh or unfair circumstances, according to Toronto immigration lawyer Mario Bellissimo.

“The situation is heartbreaking,” Bellissimo said of the Palestinian families’ plight. “Absolutely, given certain circumstances every case should be considered … I would not take temporary residency permits off the table where appropriate.”

Meanwhile in Hamilton, Amal Battrawi wrestles with the guilt of leaving her young daughters in Gaza. Her son, who’s with her, barely eats or speaks. Both are consumed with worry about their family back home.

“I came here to make a good future for my family. I had no choice,” she said. “All we want is to live a normal life like any other human being — and that’s my dream.”

It’s the same for Alhamadni, who says he’s heard little from the federal government.

“But this situation, this emergency can’t wait,” he said. “This time, a friend or a neighbour gets killed. Next time, will it be my child?”