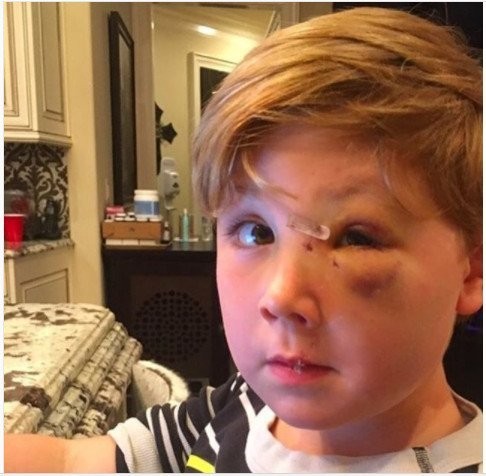 Kim Zolciak-Biermann and Kroy Biermann‘s 4-year-old son Kash may have had a big scare after suffering “very traumatic injuries” from a dog attack in April, but it looks like his love of canines is very much intact.

Earlier today, the proud mama took to Snapchat to post a plethora of images of her young son as he helped a stray dog who had just given birth during the family’s vacation to Turks and Caicos.

It all began when Kim and friend Tracey Bloom found a stray black dog, which appeared to have just given birth, stranded out in the rain. Her husband fed the stray some roast beef and as a result the animal came to the doorstep of the family’s vacation villa.

Kash quickly appeared and wanted to meet the mama dog. As he stood outside, Kash’s concerned mother warned him not to get too close to the stray.

She captioned a photo of him and the dog: “Kash is the sweetest little guy.” In the video, she also noted, “Kash has been trying to give her his breakfast all morning, go figure.”

Clearly Kim’s impressed with her young son’s big heart, which appears to be just fine after the scary attack in April. His eye appears to be healing well too, despite the fact that it’s still black and blue.

Yesterday, the reality star posted a family photo of the her vacation crew on her Instagram, and in the skin under Kash’s eye still appeared purple in the photo.

However, the injury looks worse than it is. Last month, Kim went on Watch What Happens Live! and confirmed the kiddo’s going to be just fine.

“He’s doing awesome. Thank you for asking. He’s doing great. He actually has perfect vision in both eyes, which is all we care about,” she told host Andy Cohen. “The rest we can fix.”

Earlier in the week, the mom of five wrote about her sweet son’s continued love of four-legged friends: “Kroy and I felt it was super important to continue to encourage Kash to be around animals. Kash is an absolute animal lover and I didnt/don’t want him to fear animals after all he has been through.”

Kim added, “The 2nd day he was in the hospital their was a service dog visiting all the children and I asked Kash if he wanted to see the dog, ‘He screeched Yes’ and was all snuggled up to the dog in less than a minute as if nothing ever happened!”