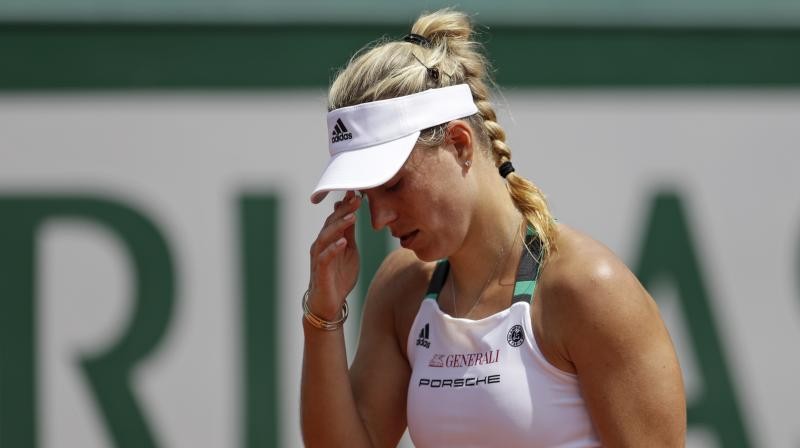 Angelique Kerber became the first top seed to lose in the opening round at Roland Garros as tearful Petra Kvitova swept to victory in her first match since surviving a knife attack which almost ended her career.

German world No 1 Kerber, the reigning US Open champion, dropped serve six times on her way to a 6-2, 6-2 defeat to Russia’s Ekaterina Makarova.

“The pressure is always there especially in the big tournaments and the Grand Slams,” said Kerber, who won her first major at the Australian Open in 2016.

“Now I have to find to myself again and just try to forget the clay court season as soon as possible and then reset for the grass courts.”

It was the second successive first round exit at Roland Garros for Kerber and continued a miserable spell for the 29-year-old on clay.

She lost her opener in Stuttgart where she was the defending champion, suffered a thigh injury in the third round in Madrid and lost first time out in Rome.

On Sunday, she fell a double break down to trail 5-1 to her Russian opponent who she was facing for the 12th time.

Makarova, now ranked 40 after reaching a career high of eight, was a double break ahead again for 3-0 in the second set.

Four successive breaks of serve followed before Makarova saved seven break points in the crucial eighth game to cause the upset.

“At the end of the match, it was really tough as I knew she wouldn’t give it to me – I had to win it,” said Makarova, a former semifinalist at the Australian and US Opens.

Kerber’s defeat makes the women’s draw even more open with Serena Williams, Maria Sharapova and Victoria Azarenka all not playing.

Two-time Wimbledon champion Kvitova downed outclassed Julia Boserup of the United States 6-3, 6-2, falling to her knees in celebration in the moment of victory before weeping at the net.

“I’m really glad to have made the decision to play here,” said 27-year-old Kvitova, who was seriously hurt when she fought off a knife-wielding burglar at her home in the eastern Czech town of Prostejov in December.

“I won the match today but I knew I had already won,” she added, referencing the initial nightmare scenario where she feared she’d lose the fingers on her left playing hand.

Kvitova, the 15th seed and a semifinalist in 2012, fired nine aces and 31 winners past Boserup, making her Paris debut at the age of 25.

Svetlana Kuznetsova, the eighth-seeded 2009 champion, made the second round by seeing off Christina McHale of the United States 7-5, 6-4.

Williams, seeded 10 and three weeks shy of her 37th birthday, had to dig deep to see off her opponent who had led 4-2 in the first set and 5-3, with set points, in the second.

“It was very hot (temperatures around 30 degrees) but I live in Florida, so I was prepared,” said Williams.

The American veteran, who made her Roland Garros debut in 1997 and was runner-up to sister Serena in Paris in 2002, will next face Japan’s Kurumi Nara who beat 15-year-old Amanda Anisimova of the United States in three sets.

Madison Brengle of the US defeated Germany’s Julia Goerges 1-6, 6-3, 13-11 in a tie stretching to almost three hours.