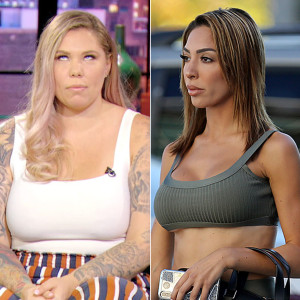 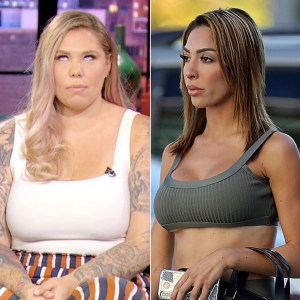 A Teen Mom matchup? Kailyn Lowry wants to get in the ring with fellow MTV personality Farrah Abraham … for a good cause.

Celebrity Feuds: The Biggest Ever

Charity boxing match promoter, Damon Feldman, told TMZ on Friday, November 16, that Lowry, 26, is set to sign a deal with Feldman’s company to participate in a fight, and that she’s requesting it be with Abraham, 27.

Feldmen told Us Weekly that should Abraham accept the challenge, he won’t move forward with taking legal action against her for pulling out of the November Boom Cups Celebrity Boxing Showdown.

“This is Farrahs chance she trained all that time for what,” Feldman said. “[If] she accepts [the] match I won’t file my legal complaint lawsuit. She robbed us and the public and was paid upfront”

Days prior to fighting Flavor of Love alum Nicole “Hoopz” Alexander, Abraham backed out of the event, which is meant to raise awareness for anti-bullying. A source told Us Weekly at the time that Abraham would be sued for her lack of participation.

The 16 and Pregnant alum confirmed she would not be at the event, and opened up about her side of the story.

“[Promoters] Damon Feldman and Michael Mak … didn’t deliver on their part. No flights, hotels, no coach flights, family that they agreed contractually,” she told Us on November 2. “Also, with probation, I cannot be around liabilities for further legal problems. The promoters failed to do business properly, and I’m more than happy to show off my work of training for four months.”

Earlier that same day, Abraham — who was arrested in June — pleaded guilty to one misdemeanor count of resisting, delaying or obstructing a peace officer. Her sentence includes five days of community service or labor, two years of summary probation and 12 hours of anger management, which she told Us she had already completed.

“Those were a blessing and it changed me for the better,” she told Us Weekly of the anger management sessions during a Crazy Horse Las Vegas appearance on Thursday, November 15.

She also spoke about her ill-fated match. “Even my boxing and that bad situation has changed me for the better. I hang out with better people to support me and not people lying to my face and setting me up for the worst and not getting too much into it, I had toxic people around me who really set me up to be in that bad situation so I don’t need to hang out with fake friends. Boxing teaches you that and now I’m getting ready for my next fitness videos, they don’t waste my time and they’re encouraging.”

Abraham and Lowry have had an ongoing feud for years that has played out on Teen Mom specials, social media and interviews. They had back-to-back exchanges of words on Twitter in both January and February of 2017.