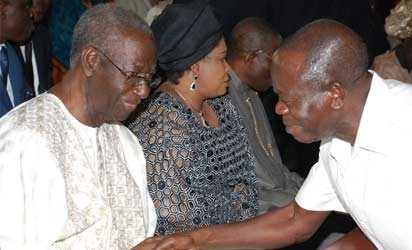 The remains of the late wife of a former Peoples Democratic Party Board of Trustees Chairman, Dame Patricia Anenih, has been buried.

Her body was interred at about 2:35pm on Saturday at the family compound in Uzenema-Arue, Uromi, Esan North-East Local Government Area of Edo State.

She is survived by her husband, Chief Tony Anenih,  children, including the late Eugene who passed on in May, and grandchildren.

Earlier, several dignitaries joined the family of the deceased at St. Anthony Catholic Cathedral, Mission Road, Uromi, where a funeral service was held in her honour.

Among those present at the service were former President Goodluck Jonathan; Governor Ifeanyi Okowa of Delta State; and his Gombe State counterpart, Ibrahim Dankwambo.

Others include serving members of the National Assembly from Edo, former ministers, top government functionaries, and chieftains from the PDP, including the PDP State Chairman, Chief Dan Orbih; a leader of the party, Chief Tom Ikimi, and members of the All Progressives Congress.

Among the NASS members present were the ‎senator representing Edo Central where the ‎PDP national leader comes from, Mr. Clifford Ordia, and that of Edo South, Mr. Matthew Uroghide.

In his tribute, Anenih described his late wife as a “treasure of inestimable value,” who had shown him, undiluted love, since he married her 53 years ago.

He said, “Patricia showed an undiluted love, constancy, and steadfastness through all the changing phases and scenes of my life even under very trying situations, such that she became a marvel and model of exemplary womanhood.

“She had a well-marked attitude of reliability and dependability and I came to rely on her in all my plans and endeavours. Her gentility, calmness and amiable disposition constituted the springboard and a necessary take-off point for all my achievements.”